Within, among, or between?

I was recently surprised to learn from my students (I really appreciate that they spoke up about it) that some phrases I had been using were confusing - most specifically among-population variation.* This led to a discussion of the meaning of within, among, and between and how these terms are used in ecology and evolution (a microcosm of how they are used more generally). As the confusion appears to be more common than I thought, perhaps it is worth explaining the situation here.

To make this explanation clear, first imagine that you are analyzing a number of separate populations (e.g., humans in different populations) and that you have measured a particular trait (let's say body size) in a number of individuals in each of those populations. Note: this is not a random example, it is precisely what we did in a paper some years ago - McKellar et al. (2009). Below is a figure from that paper providing compilation of within-population variation (y-axis) and among-population variation (x-axis) measures (here the "coefficient of variation" - CV) within a large number of animal populations. 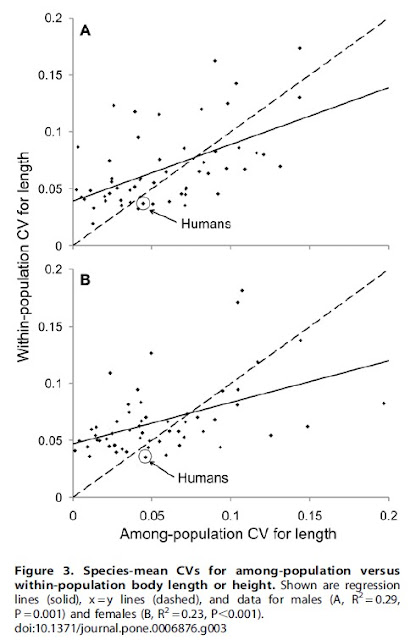 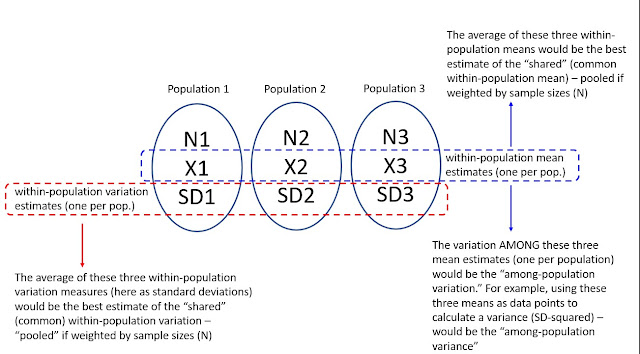 Of course, the within and between population contributions to variation can be estimated together from an appropriate statistical model (e.g., nested analysis of variance) that appropriate partitions the variance between the different levels. Further, uncertainty associated within lower levels of the hierarchy (e.g.. variance within populations) can be propagated in some models (e.g., Bayesian) up to higher levels of the analysis (e.g., variance among populations).

*** As an aside, this is one of the issues encountered when performing PCA on data from multiple populations simultaneously. That is, PCA (as opposed to DFA) ignores population identity and thus generates axes that combine within-population and among-population variation, which can generate considerable biases. Note: I am not saying PCA can't be used in such instances - but rather that it should be used with caution.