Yesterday I arrived in Galapagos for a short trip to touch bases with our field crew (“Team Pinzones”) working on the evolution of Darwin’s finches and the effects they have on the plant community. Flying in, it was immediately clear that things were different from most other years I have been here. Even Isla Baltra, the usually bone-dry island where the airplane lands, was covered with green. And I saw several large pools of water while driving from the airport to the ferry that takes one across the channel between Baltra and the main island of Santa Cruz. The rainy season was really here! I made it to the Charles Darwin Research Station without serious mishap, which was actually somewhat miraculous as my taxi driver was so sleepy he had his eyes closed more than half the time. I tried to keep him awake through conversation but I very quickly exhausted my Spanish vocabulary. I would therefore wait a few minutes and ask the same questions again – which worked fine since he was too sleepy to remember what I had said five minutes previously.
The first afternoon, we (Luis Fernando De Leon, Joost Raeymaekers, Jeff Podos, and myself) went into the “field” beside the research station. It is too hot to catch finches during the middle of the day (for us and them) and so we headed out about 4 pm. Our goal in general is to use mist nets to catch as many finches as possible to find out which of our previously tagged birds are still alive and to also tag more birds to follow over next year. As the finches are caught, they are removed from the net and brought to our banding “station.” The finches are usually quite mad when they are caught (see photo below) and seem to take great pleasure in biting every finger that comes within beak length. And man, can they bite hard. At the banding station, they are measured, photographed, banded, blood-sampled for DNA, and released. These procedures allow us to estimate selection acting on traits such as beak size and shape, and to estimate gene flow and interbreeding within and between species. As always at Academy Bay, the catching was quite good. What was different from past years was the verdure. It was quite simply green everywhere: green on the ground, green in all of the trees, green over all the boulders and rock walls. The only breaks in the green were wonderful yellow and white flowers that I haven’t seen in abundance since 2002, when my visit last coincided with a really wet period. 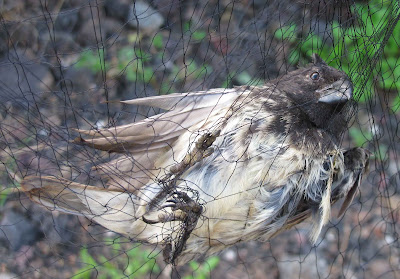 The next morning, we went to El Garrapatero, our main research site. This involves getting up at 4:30 am and having a taxi pick us up at 5:00 am for the 40 minute or so drive to El Garrapatero. We then all pile out of the truck and head off into the bush to set up mist nets in places where we think that the finches will soon be flying by. We then collect data from the captured birds as described above and for the same purpose: to estimate selection and gene flow. This information is particularly useful for El Garrapatero because one species found there (Geospiza fortis) has a beak size distribution that is bimodal: small and large morphs are present with relatively few intermediates. By contrast, the G. fortis population at Academy Bay was historically bimodal but is now only unimodal: perhaps owing to human activities that have altered the selective forces that normally promote bimodality. Luis recently wrote a blog post about the paper he just published on this topic: http://ecoevoevoeco.blogspot.com/2011/10/homo-sapiens-influence-micro.html. 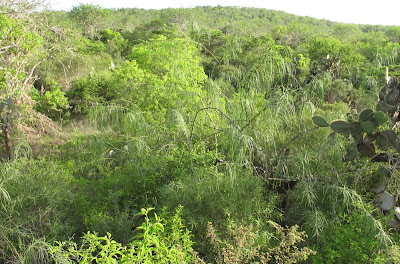 I have spent many hours walking around at El Garrapatero in past years when it was dry, and so it was interesting to now do the same under very wet conditions. In addition to the greatly increased amount of vegetation (see the photo above) – so much so as to make it hard to find some of the trails of previous years – what struck me the most was the increase in insects. Yellow, blue, and black butterflies flit everywhere, huge Galapagos carpenter bees are constantly buzzing over the ground and in the bushes, hoverflies are holding their position in midair, countless spiders of various sizes and shapes are suspended between each pair of shrubs and therefore soon on our pants and shirts and hats (a huge one leaped out when I opened my backpack when we got back to the station), and caterpillars everywhere: on plants large and small, in the webs of very happy spiders (see photo below), in the beaks of finches, everywhere. This exuberance of animal life surpasses any that I have previously seen during my visits and it seems to really drive the entire system. It is almost like everything goes into suspended animation between rain events and then everything wakes up and immediately explodes into frenetic activity. In fact, it isn’t almost like that – it is like that. 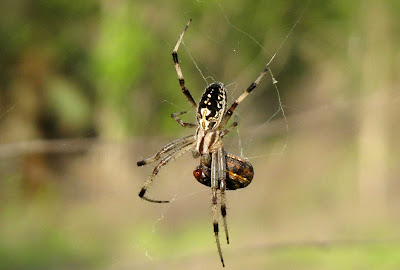