[ Post by Felipe Pérez Jvostov; I am just putting it up. – BCH ]

I have always found it difficult to start writing, about anything. The first paragraph is always the one that puts everything in context, so it is extremely important to write it in a way that the reader feels attracted and continues reading. So if I’m going to write about Trinidadian guppies and their ectoparasites, I guess I should start by talking about parasites and why they’re such amazing study systems to answer a variety of evolutionary and ecological questions. Okay, here we go. Fact #1: parasites are the most common life form, with up to 75% of species in a food web consisting of parasites. Fact #2: Parasite-related pathology (damage) results in the activation of the energetically costly host immune response. The resources that are used to fight the infection, then, are not available for reproduction or growth. Fact #3: Infected individuals are not sexy, which can be rephrased as: infected individuals have lower fitness. The idea here is that individuals (particularly males) that have few or no parasites probably have a strong immune system (good genes). So if they don’t have to waste energy in strong immune responses, what will they devote it to? Yes, reproduction and growth. Females will then prefer these particular males because their offspring will be also big, good at fighting parasites and, eventually, at accessing mates. Sometimes, however, these traits that increase fitness in regards to parasitism may be disadvantageous for other sources of selection. Here is where everything gets complicated, but also much more interesting.

For this study, we were particularly interested in how two sources of selection interact in nature: parasitism and predation, a very well studied selective force.  The best approach to answer this question is to use a model organism for which there is a good understanding of its response, both ecological and evolutionary, to predation. And so we chose the Trinidadian guppy (see picture below). Evolutionary biologists are very familiar with guppies because they’ve been studied for over 30 years in their natural environment, but probably for somebody unrelated to this field guppies are just a fish that you can buy in a pet shop. Guppies are sexually dimorphic live-bearing fish endemic to South America and adjacent islands. Due to their very short generation time, guppies have shown very fast adaptation to a variety of environments. Many of these environments can be classified by their mortality rates due to predation, and have thus been classically cataloged as high- or low-predation. Guppy populations that inhabit these two distinct environments have diverged in their life histories, behavior, and ecology in general (i.e. guppies have evolved different adaptations to their particular predation environments). For example, guppies that have evolved under high predation pressure show early sexual maturation and increased reproductive effort (how much of their body weight is made of embryos). They also tend to have many embryos, but small ones. In addition, guppies also differ in their schooling and mating behaviors. Males from low-predation environments engage females in courtship and pursue them, displaying their coloration – males with more coloration tend to have higher reception from females. In contrast, in high-predation environments males tend to approach females quickly, because courtship behavior increases the chances of being spotted by a predator. Finally, when fish from a high-predation population are introduced to a previously guppy- and predator-free environment, they evolve to trait values similar to those of natural low-predation fish. 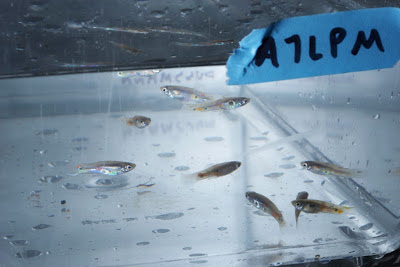 If guppies have adapted to predation, how could this affect their adaptations to parasitism? I mentioned earlier that parasite-related pathology is energetically costly, not only because the immune system is activated, but also because of physical damage. The host becomes lethargic – just remember the last time you had a cold, or even better when you traveled to that beautiful tropical country and tried the delicious street food, and you’ll know what I mean. Natural selection should favor immunologically strong guppies in high-predation environments, because infected fish are easier prey. Basically, genes for weak immune systems are being constantly removed from the population by the predators.

Although there may be many other ways in which predation and parasitism interact in the Trinidadian guppy system, this simplified view had empirical support. Joanne Cable and Cock van Oosterhout (2003) compared resistance to a ubiquitous ectoparasite between a high- and a low-predation guppy population from the Aripo. They found that, in the lab, fish from the high-predation environment were much better at limiting their parasite load, and on average the length of their infections was much shorter than for low-predation guppies. Moreover, a later study by the same authors found that in the lab, when infected with the same ectoparasite, larger guppies had higher parasite loads and also higher mortality rates (Cable and van Oosterhout, 2007). In wild populations, then, guppies could be under strong parasite selection for earlier maturation (life-history theory predicts that when there is increased mortality in larger or older fish, earlier maturation should be favored by selection). Therefore, adapting to predation should also be beneficial for parasitism, and hence high-predation guppies are more resistant to parasites. However, the previous studies were based on only one river, the Aripo. In order to make generalizations of this pattern across the different rivers in Trinidad a larger number of rivers would need to be compared.

To test whether high-predation guppies are better adapted to parasitism than their low-predation counterparts, we compared guppy phenotypic response to the ectoparasite Gyrodactylus in traits such as body growth, reproductive effort, number of embryos, and infection dynamics for fish from eight populations (4 high- and 4 low-predation), from four rivers: Aripo, Marianne, El Cedro, and Quare. The phenotypic response was compared between the populations exposed to parasites, but also with control populations that were kept parasite-free. We conducted our experiments in mesocosms or artificial stream channels that closely replicate the natural conditions that guppies experience in the wild, using Gyrodactylus from each guppy population (photo below). This allowed us to make inferences about infection dynamics and phenotypic response in nature. (I would like to use this opportunity to thank David Reznick from UC Riverside and the FIBR Project: From Genes to Ecosystems for facilitating the use of these mesocosms). 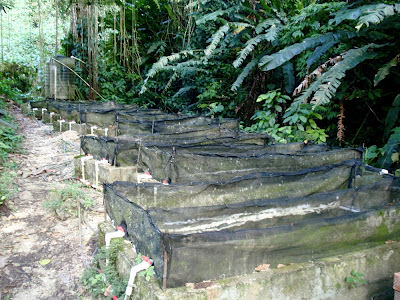 Using Gyrodactylus has many advantages. They commonly infect high- and low-predation populations, and in the lab they induce up to 50% mortality in guppies. They are specialist parasites with extreme progenesis: each mature female has in its uterus a fully developed embryo, which in turn has a developing embryo. This allows them to have exponential population growth rates and strong demographic effects on the host population, even in periods of time as short as 27 days, which was the duration of our experiment.

Our results were not consistent with previous work with fish from the Aripo river. We found great variability in infection dynamics and phenotypic response between rivers. However, guppies that were exposed to parasites, regardless of the predation environment, consistently had lower body growth and higher reproductive effort than those in the control channels. This was coherent with previous theory and empirical work.

There are a couple of possible explanations about the drivers of these patterns. First, infected individuals may have to re-allocate energy to immune response to fight the infection, leaving less energy for growth. Second, Gyrodactylus pathology may be severe, so infected individuals eat and grow less. Although both are possible, it seems that the former is a more plausible explanation. The infection levels we observed in our experiments are lower than what is observed in the lab, but consistent with what we see in nature. In addition, we did not detect any effect of parasite load (number of parasites) on body growth or reproductive effort, meaning that it was the exposure to parasites, and not the actual infection, that was inducing these responses. Reduced body growth has another adaptive value: since larger fish tend to have more parasites and higher mortality rates, a smaller body size could reduce the high costs of Gyrodactylus infections.

In conclusion, our study reveals that guppy phenotypic response to Gyrodactylus infection is similar across populations from both high- and low-predation environments, although the degree and the strength of this response is quite variable across the different rivers. However, there was no consistent pattern when comparing infection dynamics, and an important final point should be made here. We used parasites that have a coevolutionary history with their respective guppy population. Coevolution between parasites and their host is temporally and spatially dynamic, which could lead to divergent evolution of guppy resistance and parasite virulence. Therefore, our results could be the artifact of coevolution, rather than the interaction of predation and parasitism, making inferences somehow difficult. But don’t worry; we are already working on this…

Cable, J. & van Oosterhout, C. 2007. The impact of parasites on the life history evolution of guppies (Poecilia reticulata): the effects of host size on parasite virulence. International Journal for Parasitology 37, 1449-58