Arizona Sky Islands: a natural laboratory for studying the EvoDevo of ants


Post by Marie-Julie Favé (MJ) – PhD student at McGill in the group of Ehab Abouheif, now postdoc at Université de Montréal and the Ontario Institute for Cancer Research.

This journey that started in Tucson many years ago finally made its tortuous way into the peer-reviewed system and got published recently here [1]. We also received some nice news coverage here!

One of my childhood cartoon heroes was Lucky Luke. For those who are not well versed in the franco-belgian universe of cartoons, Lucky Luke is a solitary cowboy living circa 1885 in the American Southwest "who shoots faster than his shadow", and whose life consisted of the recurring task of capturing the Dalton brothers, a pair of gangsters.

When I was a little older, I dove into the universe of Sergio Leone and watched Once Upon a Time in The West more times than I can remember, imagining myself being Claudia Cardinale captured by the villain Hendry Fonda. I imagined immense hot plains of red dust, harmonicas, horses, dust balls... This was my sole and idyllic knowledge of the American Southwest when I abruptly landed alone in Tucson in August 2007 with my giant field bag as a fresh PhD student. 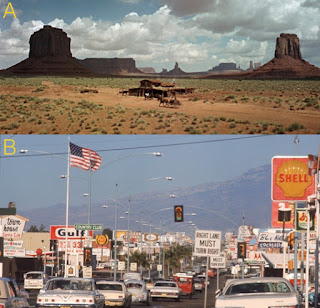 Fig 1: (A) Idyllic Southwest image of MJ’s childhood. (B) Less-than-idyllic landing of MJ in Tucson. This is a picture of the Speedway in the 70s when it won the "ugliest US highway" but believe me it hasn’t gotten any better since then.

Then I saw those mountains. You can actually see them quite well as the plane makes its approach to Tucson, flying right by the southern slope of Mont Lemmon in the Santa Catalinas range. I never imagined before that the desert would be punctuated with green, luxurious, high-altitude mountains harbouring such incredible biodiversity. 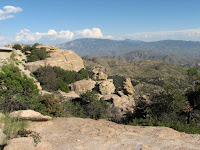 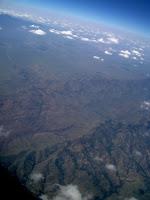 Fig 2: The Sky Islands from the plane above Tucson, and from the top of the Santa Catalinas

The Arizona Sky Islands, also known as the Madrean archipelago, consist of ~45 mountains, the largest reaching ~3000m elevation, and are scattered across the US–Mexican border. They are surrounded by a dry, hot (45°C+), arid desert where we often spotted roadrunners (beep beep), rattlesnakes, giant scorpions, and other typical desert fauna/flora – as well as many of the amazing desert ant species that call Arizona their home, like Pheidole rhea (which also led to another of Ehab’s fascinating projects, [2]), Pogonomyrmex barbatus [3], and Myrmecocystus spp. (honey pot ants). However, being one of those cold-adapted Northern Canadians, I was more than happy to head, each morning, towards the higher, cooler elevations – wallowing in regret for having gulped down another Arizonan delicacy at Jerry’s breakfast place [4]. 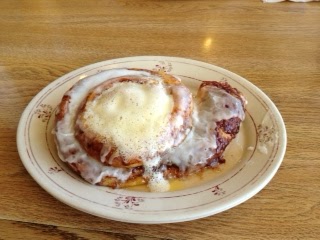 Fig 3: Cinnamon bun @ Jerry’s. The poor thing is trying to swim out of the ‘butter’ pool. I will help him with my fork.


From the dry, arid desert, every gain in elevation of a few hundred meters brings with it a novel landscape and different species. Junipers, agaves, and oak trees start to make their appearance around 1500m elevation, soon to be replaced by Douglas-firs and pinyon pines at the highest elevations, around 3000m for Mount Lemmon.

Interestingly, Mount Lemmon was named after Sara Plummer Lemmon, a young, intellectual, activist Victorian lady who moved, in 1870, to the Wild West of gambling, prostitution and horse thievery... She became a dedicated botanist and convinced her husband to undergo – as a honeymoon, no less – a botanical expedition in the then-quite-wild Santa Catalinas! Her heritage includes getting the golden poppy named as the California state flower, and many books published under her husband's name that she unfortunately (and obviously) wasn’t given any credit for. Ok, enough tangents… 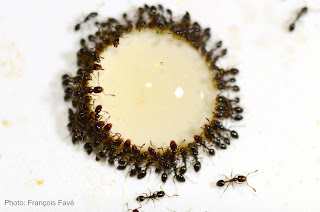 Monomorium emersoni, our focal species, is found throughout the middle and high elevations. To my great relief – because I needed a large number of colonies – this may be one of the easiest ant species to collect. Drive, find a good-looking spot, flip a good-looking rock, quickly suck up queens with your cool ant-sucking device, then suck up as many workers as possible to support the colony when it's back in the lab (Fig 4). Ehab and I quickly became masters of the highways that connect the Arizona Sky Islands. Over the years, and after countless hours of driving while listening to good old country music, we collected over 300 colonies, sampled from top to bottom along the slopes of five of the largest Sky Islands (Fig 5). 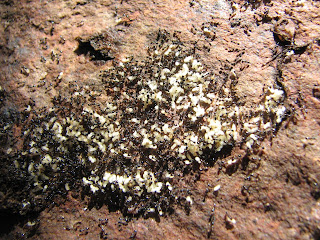 Fig 4: Surprised Monomorium emersoni colony when their home sweet home rock is flipped by a myrmecologist 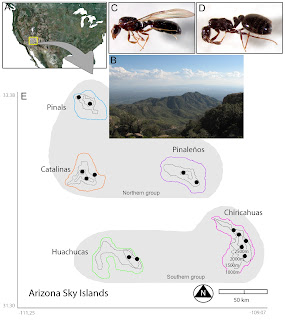 Any fellow evolutionary / popgen biologist will understand that one of the first questions that I got totally obsessed with was “given this unique landscape, how are each of Sky Island M. emersoni populations related to one another?” Using classic population genetic tools and inference, we discovered, not surprisingly, that each Sky Island M. emersoni population is roughly isolated from the other ones, the large desert areas acting like barriers to gene flow between mountain ranges. However, gene flow within a mountain between elevations is possible, mostly driven by males.

We also found that gene flow within a mountain range is much greater between similar habitats than between different habitats, regardless of the geographic distance between them, pointing towards a mechanism of isolation-by-environment.  Furthermore, the Sky Island M. emersoni populations revealed an interesting demographic history: the Northern and Southern Sky Islands each form a distinct group within which contact was more extensive in the past (Fig 6). Hold onto that, we’ll come back to it in a minute. 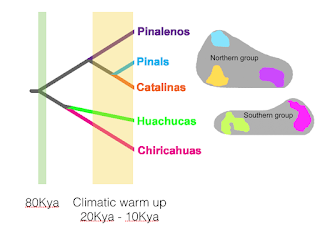 
Workers in ants are universally wingless, while most reproductive castes have wings. But it is especially common for Monomorium species to have the unusual peculiarity of having some queens born without any wings.  Some species within this genus have winged queens, while other species have wingless queens, and some have both.

This evolutionary flexibility suggests a common developmental potential for producing either phenotype under the proper genetic or environmental conditions. Using the frequencies of wing/wingless queens along the slopes of each Sky Island, we found that a combination of habitat fragmentation and elevation best explains their distribution, with winged queens found mostly in continuous and low-elevation habitats.

Wings originate in queen larvae as imaginal discs, small synchronized clumps of cells that will become wings during metamorphosis (Fig 7). Although lacking wings as adults, wingless queens still produce these discs as larvae, but in an atrophied form called vestigial wing discs. We looked at the spatial distribution of some wing-related gene products in these vestigial imaginal discs, and found that many of them are produced and do form spatial patterns, while others are completely shut off. 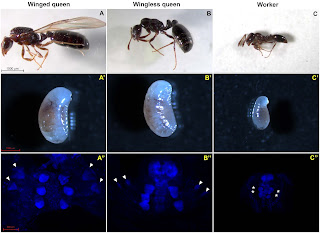 
Interestingly, we found that for some genes that are expressed in vestigial discs, there were differences in their expression in wingless-queen larvae coming from different Sky Islands. For example, we observed that the expression of mef2 – a key gene involved in wing muscle development – differs among wingless-queen larvae from different populations and shows a signature of the ancient demographic split: Mef2 shows expression differences between wingless queens from the northern and the southern Sky Islands.

We also found a gene, exd, for which wingless-queen larvae from each Sky Island exhibit population-specific expression patterns (Fig 8). This suggests that these differences arose following the complete isolation of the five Sky Island populations ~10,000 years BP and are therefore an indirect consequence of climatic warming since the last ice age. 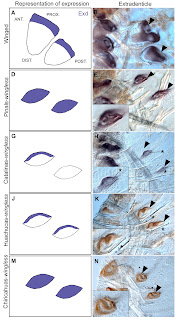 Fig 8: The variation in Exd expression pattern across Sky Islands (Cartoons on the left column, actual expression images on the right column for evodevo geeks).  Exd expression covers the whole disc in wingless queens from the Pinals (2nd line) and the Chiricahuas (last line), whereas it is much more restricted in the other Sky Islands, the Catalinas (3rd line) and the Huachucas (4th line). This represents a pattern that likely has evolved independently in each Sky Island, as it does not recapitulate historical contacts between Sky Islands (Fig 5).


Once upon a time, about 20,000 years BP when glaciers covered most of North America, the climate was much cooler. Forests surrounded the Arizona Sky Islands, ecologically connecting each mountain range with the others. One can imagine the hundreds of streams coming from the glaciated mountain tops, the luxurious trees, ferns, and flowers… infinite possibilities for animals to move freely from one Sky Island to another, according to their dispersal abilities. It would have been a perfect habitat for a winged queen, continuous and of low elevation (since the mountaintops were covered with snow!).

Then came the warming, very slow at first but gradually accelerating – snow melt, warming, dry air, warming, desertification, forest fragmentation, aridity... the trees found refuges on each mountain at the higher elevations, which remained cool, but each refuge became isolated from the others by large areas of desert. Monomorium followed their forest. And then wingless queens, which are often produced as anomalies by ant colonies, started to become advantageous in those fragmented and higher elevations, and rose to higher frequencies independently on each mountain range as the desert now acted like a barrier between Sky Island populations. 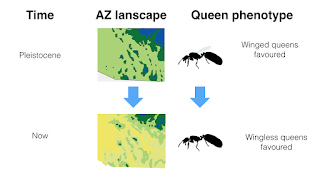 Fig 9: Time replay of the warm-up in the Sky Islands and the evolution of the wingless-queen phenotype.


This independent evolution of wingless queens on each Sky Island occurred through recurrent interruptions of similar wing-patterning genes, and at the same time, induced the release of the unexpressed differences in some genes, such as mef-2, that accumulated in populations during or after the demographic split between the northern and southern Sky Islands ~80,000 years BP.

This natural experiment on Monomorium queens sheds some light on the predictability – or not – of changes during evolution, which is a long-standing debate in evolutionary biology [5]. We have discovered both repeated changes in genes (the same gene expression across replicate populations), and random changes (changes in gene expression unique to each population or groups of populations). Experiments that test the predictability of evolutionary change have brought insights into this debate (for example, the astonishing cell lines of Richard Lenski's group; see [6] for a review of many of them!), and the Monomorium system provided a test of those ideas in the wild, which is quite unique! In fact, this is to our knowledge the first study in wild populations to show that evolution following a major climate change occurs by a “mosaic” of both random and predictable changes. 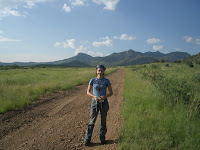 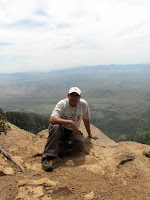 Fig 10: MJ and Ehab, the masters of the Sky Island highways.

We also tried to highlight another phenomenon that hasn’t received much attention: the consequences attributable to organismal development during environmental changes. Scientists have built forecasting models about how species will react under climate change scenarios, which are necessary to predict how our landscapes, our agriculture, and our exposure to diseases will be influenced by global warming. However, most of these models are based on the current phenotypes and abilities of the species under study.

As in the case of Monomorium, developmental outcomes can be modified by a change in the environment and affect, for example here, the dispersal abilities of the individuals, which would greatly affect the predictions of such forecasting models. Our beautiful little Monomorium are probably facing a not-so-beautiful future, as their forested habitats will shrink even further under as global warming progresses in the American Southwest [7]. This habitat loss would likely select for more and more wingless queens, completely eliminating their capacity as a species for any long-range dispersal to more hospitable habitats. 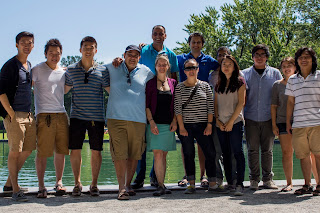 One thing that this story has taught me (aside from the sad lesson that one should not abuse Jerry’s delicacies before running up mountains) is that doing integrative science is both a beautiful and an arduous task. We had to overcome several obstacles to get "integrative results" understandable to many reviewers of various backgrounds simultaneously. But the motivation and insights you get from performing such research is unmatched from any of its separate disciplines. It generates a synergy between results that cannot be achieved otherwise.