The Wood Duck Rule in Ecology and Evolution

My last post used the Mallard as an example of a species that seems to fit in everywhere without difficulty. I used this ultimate generalist to discuss the theory of ecological fitting. The present post is about another duck that is quite different: the Wood Duck, which I will use to discuss the “Law of the Unspecialized.”

While no one seeks out pictures of Mallards, everyone seeks out pictures of Wood Ducks – they are spectacular birds. In fact, for me, they have always been one of those trophy birds that I would get super-excited about seeing – something to write home about and for which to hide for hours in the bushes hoping that one would come near. My kids love Wood Ducks too, partly because we occasionally see a few while kayaking near our house and partly because of the Duck's Unlimited book “A House for Wanda Wood Duck.” 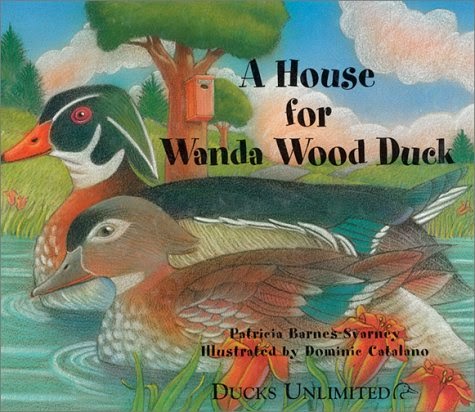 In the book, a (human) family has a Wood Duck that nests each year in a hollow tree beside their pond, but one day the tree blows down. The kids are devastated, but Dad saves the day by building a Wood Duck box. The box is mounted on a stump, the duck appears, the babies hatch, the kids are excited, and everyone is happy – including my kids. I had read this book to my kids many times and each time I had noted to them the instructions on the last page for building a Wood Duck box. Each time, I would tell the kids: “One day I will build a box and we will see if Wanda will ditch that clingy family in the book and come to our house” – but, year after year, I put the book away and never got around to building the box. Then, one rainy spring day a couple of years ago, I finished reading the book and decided: “Damnit, I am going to do this RIGHT NOW.” So the kids and I built the box according to the instructions in the back of the book and mounted it on a tree over the canal on which we live. “Well, that was fun, kids - but don't expect too much.”

The next morning I was awakened by my wife, Heather, telling me to look outside. There, sitting on a branch looking greedily up at our new box, was a female Wood Duck. Rarely have I received such unexpectedly instant gratification. That first year and the subsequent year, we “raised” a family of Wood Ducks in the box. We rarely saw the adults, and we never saw the babies, but we know it worked because we would occasionally see the female going in or out and – at the end of the summer – I opened the box to see the egg shells. Knowing that we were successful but so rarely seeing the birds made us wish each year for a peep-hole into the box, something we could open up to look in at the female and her eggs. So, this year, we finally built a little door in the side of box, mounted the box even before the ice was out, and were again gratified by soon seeing a Wood Duck coming and going.

A few days ago, I finally put the peep-hole to the test. I put a ladder against the tree, undid the clip for the small door we had added, and slowly opened it up. There she was, sitting in the bottom of the box. She even let me stick my camera into the box to take pictures. It was remarkable – almost like she was comatose or pretending to hide. “You can’t see me. You can’t see me. You can’t see me.” (I am reminded of those movie scenes where a cop knocks on a door of an apartment and the clueless bad guy inside yells “No one’s here!”) Eventually, I guess I was too invasive and she fled, revealing 15 eggs. I worried that I might have permanently frightened her away, but she was soon back. It was crazy really: a huge scary creature climbs your tree, tears apart your nesting site, sticks big objects that flash inside, and you flee in abject terror. Moreover, our cat – despite our efforts to discourage him – keeps sitting on top of the box presumably hoping to snag some Canard Confit on the way in or out. Yet she keeps coming back. Does she have nowhere better to go?

So, this got me to thinking. If a Wood Duck shows up at a brand new box within an hour of putting it up, and keeps coming back despite discovering its permeability to scary mammals, nesting sites must be extremely limited. Indeed, the Wood Duck is an obligate tree cavity nester, such that the number of nesting pairs will inevitably be limited by the number of available cavities. This presumably means that a bird that gives up on a less-than-optimal cavity might not find another one. Indeed, the push in the 1930s to put up Wood Duck nest boxes apparently dramatically increased Wood Duck numbers to the point that they are considered of “Least Concern” by IUCN.

But why should Wood Ducks be so specialized in their choice of nest sites? Why not nest on the ground? Mallards do it and are doing very well – certainly much better than Wood Ducks. Certainly tree cavities and nest boxes give at least some protection against (real) predators, and so I can see a good reason to start nesting there – and to then adapt to those conditions. For instance, Wood Ducks are remarkably adept at getting in and out of small holes on vertical trees and their young can leap out of the hole and fall 60 feet without injury, like fluffy little ping pong balls. Yet, what does a duck do when it can’t get a nesting hole? Does it just not breed at all? Does it try to nest on the ground? Either way, specializing on tree holes seems a great way of evolutionarily painting yourself into a corner.

Here, then, we have a clear case of a species specializing so strongly on a particular resource (tree cavities) that it ultimately traps itself in a situation where it will forever be marginal. And this specialization is particularly problematic should conditions change, such as when logging, agriculture, and urbanization dramatically reduced tree cover in North America. Of course, this result partly shows that evolution is not forward-looking and does not work for “the good of the species.” Instead, evolution tinkers with what is present and selects on the basis of what is good for an individual. That is, the individuals that first used tree cavities – and that were better adapted for those cavities – had higher fitness and so the use of tree cavities and specialization on them increased through time even though it would eventually cause species-level problems, especially when the environment changes unfavorably (loss of trees). (Here I am reminded of “evolutionary traps” or – in extreme cases – “evolutionary suicide”, although better examples certainly exist.)

I was pondering these ideas today right around the time that I need to take my morning constitutional to the reading room. Of course, one needs something to read in the reading room and so I picked up the journal that happened to be lying around: the October 2013 issue of Evolutionary Ecology Research. (How I miss the days of routinely browsing printed journals.) Sitting down and opening up the issue, I saw the first article: “Cope’s Law of the Unspecialized …” by Pasquale and Fortelius. Hmmm, I knew of Cope’s Rule (organisms tend to get larger through evolutionary time) but not Cope’s Law. Having an academic interest in Laws-Rules-Conjectures and the like, I read on. “… new major taxa are more likely to originate from a generalized, rather than a specialized, member of the ancestral taxon …” (Pasquale and Fortelius 2013, p. 748). Right then and there, I felt a blog coming on.

I had heard of this sort of logic before, although not under that name. That is, new adaptive radiations tend to be founded by generalist species and new species in the radiation then increasingly specialize in ways that lead them toward evolutionary dead ends. Most derived species simply become so specialized for a particular mode of existence that they are unlikely to explore new strategies. Stated another way, specialist-derived species get stuck on an adaptive peak surrounded by a low-fitness moat. As a result, they simply can’t evolve away from their local peak – even though other nearby fitness peaks might be much higher. Although evidence for this idea of dead-end specialists is mixed, I think the Wood Duck provides, if not proof, at least a potential iconic example: the generalist Mallard is much more likely to persist and to generate the next radiation of ducks than is the Wood Duck. Of course, other examples are even more obvious. Specialist parasite lineages are unlikely to outlive their host lineages, and some “hyperparasites” specialize on parasites that specialize on parasites that specialize on parasites. Alpine specialist plants on mountaintops surrounded by warm climates (sky islands) will go extinct with climate change. Nevertheless, the Wood Duck Rule sounds better than the Mallard Rule or the Hyperparasite Rule or the Sky Island Rule. I suppose the Koala Rule or the Giant Panda Rule might have the same cachet though.

Presumably the way to break the Wood Duck Rule would be to have your adaptive peak simply disappear, leaving you no choice but to evolve toward a new peak. Of course, you would also have to have high enough fitness in the new environment to attain positive population growth, and you would have to be protected against homogenizing gene flow from the initially more-abundant specialist members of your species (the ephemeral divergence hypothesis again). So we need to conduct an experiment. We need to take a specialist away from its original environment and place it into a new environment where it must then embark on a new evolutionary trajectory – and we can remove the above constraints by (initially at least) creating otherwise benign conditions (no predators, supplemental food) and by preventing gene flow from the ancestral group.

So, when I get home tonight, I am going to capture some Wood Duck adults and place them into a large cage in my yard so they can’t leave and so predators – including my cat – can’t get at them or their eggs. The cage will extend into the canal so they can still get food. I will also take down the nest box, cut down the tree, and place some nice, Mallard-style nesting areas (the new habitat) in strategic locations. Then I will kayak around the entire area and shoot all cavity-nesting Wood Ducks (I suppose that will have to be all other Wood Ducks) or, perhaps better yet, simply knock down all nest boxes and block all tree cavities. Then I – and maybe my kids – will continue this experiment for the next 50 years or so and see what we get. Today’s Wood Ducks might hate it but tomorrow’s Wood Ducks will thank us. Just kidding.