Plasticity and genetics in un-invaded refuges

One of the greatest contemporary threats to the biotic integrity of native aquatic communities is the invasion and rapid geographic spread of exotic species. Whereas much research is dedicated to understanding factors that control the establishment and impacts of exotic species in non-native habitats, less research has addressed how native species can mitigate the ecological impacts of invaders through evolution. In many cases exotic species can cause the extirpation of native species – but there are also circumstances that allow co-existence of native and exotic species within the same region. In particular, plasticity and maternal/genetic effects may play a special role in enhancing spatial subsidies of dispersing individuals from un-invaded refuges at invaded habitats. In our study, we consider how plasticity versus genetic/maternal effects in native amphipods (Gammarus fasciatus) that inhabit un-invaded refuges possibly contributes to their co-existence with exotic amphipods (Echinogammarus ischnus) at invaded habitats in the upper St. Lawrence River, Quebec, Canada.


We anticipated high trait plasticity in the native amphipod because of high gene flow and high spatial and temporal environmental variation in our study system. Unexpectedly, we detected both plastic and genetic influences on the traits of native amphipods along natural ion gradients. Plasticity was detected in only one trait, post-moult calcification, and three other traits (larval survival, time to first reproduction, and fecundity) were influenced by genetic variation or maternal effects that differed between ion-rich and ion-poor habitats. Overall, we advance a hypothesis for how native trait plasticity and genetic/maternal effects at ion-poor, un-invaded refuges could influence native species persistence in face of exotic invasion along environmental gradients through spatial subsidies. While the most successful invaders tend to be generalists that can displace specialist natives in many cases, our hypothesis suggests that the converse can also be true - generalist natives can persist with more specialized invaders when spatial demographic subsidies are enhanced by plasticity and genetic/maternal effects across environmental gradients. Future work will address the net effect of multiple influences from plasticity and genetic/maternal effects on overall fitness of native amphipods dispersing from ion-poor, refuge habitats at ion-rich, invaded habitats. 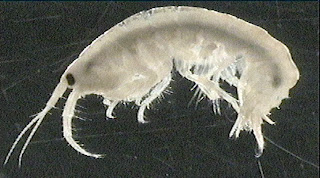 We are looking forward to further developing and testing these ideas on amphipods and other cool creatures in Lac St. Louis in future projects.