Life after death: When does your phenotype expire?


Throughout an organisms’ life, the expression of genes, regulated by the biotic and abiotic environment, gives rise to traits that determine how fast it can run or how tall it can grow. Many traits also affect species interactions; for example, are you fast enough to outrun predators? Do you look tasty to herbivores? Most traits (e.g., running speed) cease to be important once an organism dies, but some traits linger and have “afterlife” effects on the environment. A prominent example of afterlife effects can be found in decomposing plant material, which is a crucial part of nutrient cycling. Microbes and fungi are critical to many stages of nutrient cycling, such as the mineralization of organic matter and the nitrification of NH4+, which plants cannot use, to NO3-, which is usable by plants. However, microbes and fungi can be “picky eaters” in a sense, as they prefer substrates with labile simple sugars instead of defensive molecules such as lignin. Simple sugars have carbon and nitrogen supplies that are easily accessible, while larger, more complex molecules require degradation by energetically-costly enzymes. Therefore, genetic and environmental influences on the chemical composition of plant material can persist after a plant sheds its leaves and affect how quickly its nutrients are cycled.

Afterlife effects aren't a new concept; exposure to herbivores and ozone has been shown to indirectly affect decomposition by altering leaf chemistry. However, we recently documented a new type of afterlife effect by showing that genotypic variation in a focal plant’s neighbors could affect the chemical composition of the focal plants litter. Although we don’t have the mechanism completely nailed down, it appears that focal-plant biomass allocation (putting carbon into roots vs. rhizomes vs. stems, and so on) is affected by neighbor-plant genotypic variation, and that shifts in focal-plant biomass allocation are correlated with focal-plant litter quality (specifically, lignin:N). This type of afterlife effect can also be considered an indirect genetic effect (technically, an interspecific indirect genetic effect because the neighboring plants belonged to different species), through which the expression of genes in one individual affects the phenotype of a different, heterospecific individual. 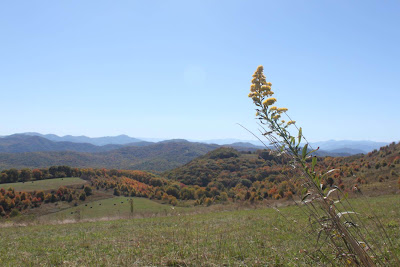 Solidago altissima, one of the study's focal species, along the TN-NC border.

We (Jen Schweitzer, Joe Bailey, and me) were curious whether genetically­-based afterlife effects were unique. Do they have consequences that, for example, ozone-driven afterlife effects would not? Ultimately, we started to think about ecosystem processes (productivity, nutrient cycling, among many others) and the basic drivers of these processes. We argue that ecosystem processes are the “gene-less products of genetic interactions”, meaning that the plant, animal, and microbial traits that interact to create ecosystem processes all have a genetic basis, although the expression of that genetic basis may change depending on how an organism’s genes interact with the biotic and abiotic environment. So, you may ask – “What does this mean?” We’d argue that the “ecosystem processes are gene-less products” perspective allows us to put ecosystems in an evolutionary framework. We can then ask questions like: How might nitrogen cycling or plant productivity change as natural selection acts on the genes that are the most basic drivers of these processes?