The Toblerone of Speciation and a Great Big Ball of Heterozygosity

I recent spent 1.5 weeks at the Stickleback 2012 meeting on Bainbridge Island near Seattle and the ESA meeting in Portland – two meetings that could not be more different. The first involved just over a hundred people and was held at an isolated retreat with no concurrent sessions and a focus on a single species. The second involved more than 4000 people and was held in the middle of a big city with gazillions of concurrent sessions on countless different species. In between the two meetings, I took a camping and photography trip out on the Olympic Peninsula. Sometimes blogs become travelogues (trlogs?) and this will be one of those cases, plus some Toblerone and heterozygosity thrown in for fun – as you will see should you dare (or are bored enough) to continue.

Stickleback 2012 was a real treat, thanks largely to organizer Katie Peichel. It was in a beautiful and private setting with a bunch of like-minded folks who were always up for a wild time: the nightly party in the appropriately-named Ichthyology Inn got bigger and later day after day. The talks themselves were excellent and several cool themes emerged. Perhaps my favorite – if only for the metaphor – was the Toblerone of Speciation. In essence, full genome sequencing and high-resolution genome scans are repeatedly revealing that most of the genetic divergence between stickleback populations is in the centers of chromosomes. If you then line up a bunch of chromosomes one beside the other you have pseudo-predictable divergence reminiscent of the peaks and dips of Toblerone. Marius Roesti showed data to this effect and coined the term, Felicity Jones showed (among many things) that this pattern was at least partly the result of reduced recombination in chromosome centers, and Julian Catchen showed that reduced recombination was often (but not always) the result of inversions.

I had a great many vigorous liquid-enhanced arguments at the meeting – and many of these focused on how to infer the genetic basis for adaptive divergence and speciation. As just one example, a very popular theme these days is to use F2 hybrid crosses (which show recombination between parental chromosomes and thus allow genetic mapping) to infer the genetic basis for adaptive divergence and – in experiments – selection on those markers. But how is this best done? In order to have high power and a consistent and simple set of alleles to analyze, the typical approach is to work with a single F2 cross – but this only captures a maximum of four possible alleles at every locus (two from each of the two grandparents). Given that essentially all stickleback populations/genes do not show fixed differences, this means that what these studies are really examining is the effects of a very limited set of alleles at any particular locus. But studying/analyzing more families reduces power, introduces variation, and is more expensive. Sigh.

And the debates were endless: they raged all day, then all through the parties (interspersed with crazy arguments about human behavior – particularly with Gina Conte, Matt Arnegard, and Matt McGee), and long into the night. My roommate was Patrik Nosil and we would often get to bed around 2-3 am and then start arguing about something instead of sleeping and have to get up at 4 am to drag out a computer and look at relevant data. Speaking of Patrik, he was the token external speaker, although he had also worked on stickleback previously. He gave a plenary talk that walked the fine line of talking about his own work while also trying to integrate the themes and results emerging from the daily stickleback talks. In fact, half way through the meeting he threw away his originally planned talk and wrote a new one that was inspired by the ongoing presentations and debates. It could have failed miserably but instead it did a great job of adding more fuel to argumentative fires.

Perhaps the most important outcome of the meeting is that we have decided to create an “institute of our friends” (thanks to Ben Letcher for the idea). Endowed by a rich and visionary donor, it will be an invitation-only institute that conducts cool research with cool people in a cool facility in a cool place. One key design feature of the facility will be a whisky bar that opens after 8 pm (otherwise we would be drunk all the time) and another will be an extensive bouldering wall. To try out possible wall designs, the founding members of the institute (me, Katie Peichel, Jenny Boughman, and Patrik Nosil) used the meeting’s free afternoon to visit a climbing gym in Seattle, where we “crushed” as honorary institute graduate student Phillip Cleves so aptly put it. Then it was back to the meeting venue for the “friendship circle” party, with a roaring fire and live performances of two classic stickleback videos: “I’m Bringin Stickleback” (performed by the original artists Phillip Cleves and Andrew Glazer) and “I’m in a Pond” (performed by the Schluter lab, yes including Dolph). The studio versions can be found here and here.

Although the stickleback meeting eventually had to end, ESA didn’t start for another three days, so I headed off for a short camping trip on the Olympic Peninsula. Despite having lived in Seattle for 6 years, these were the best two days of weather I had ever experienced here – warm and sunny all day long with spectacular views of the mountains and accommodating marmots and bears to photograph. (Some photos are posted here.) Then it was off for Cape Flattery on the very northwestern tip of the peninsula to check out some marine critters. The big fuzzy stuff, such as sea otters, was cool of course but my favorites were some crazy 1-cm long amphipods.
In a particular location on one beach, these amphipods were running across the sand (looking like little armadillos) and periodically hopping great distances. In between, they would stick their heads down holes in the sand and then pull them back out again for more running and hopping. I had never seen this before and I just had to sit down and watch and photograph for a while. I first noticed that when they entered a hole, they stuck their long red antennae down inside and seemed to be tugging at something. One time I saw a large one sort of explode backward out of the hole and fall precipitously on its side –like a tug of war game where your brother lets go just when you are pulling your hardest. So what were they pulling on? I eventually saw one of the intruding amphipods yank another amphipod out of the hole. Was it a male that they were trying to remove from a hole that had a female? Was it a competitor for the best holes? Was it a female that they wanted to mate with? I never figured it out (perhaps some reader can tell me) but I later noticed a number of the big amphipods holding something underneath them. Blowing it up on the camera screen, I could see it was a smaller amphipod – a female holding a male? And what about that crazy hopping? I had initially assumed that it was an attempt to get away from me as potential predator but it turns out that the putative males holding the putative females were beset by tiny flies and when too many accumulated they would do a huge hop and leave the flies behind. Were they parasitic flies that they were trying to escape? Ever since seeing these amphipod trials and tribulations, I was thinking ahead to my next contribution to the “what did I learn today”game that my family plays at dinner (see this older post for more details).
Then I was off for ESA at Portland, where I was in a symposium on “Contemporary Evolution Amid the Human Enterprise.” Steve Brady and Dave Skelly had organized a series of talks by people who study evolution in natural populations, thus bringing some much needed evolution into the normally evolution-free zone that is ESA. I gave the first talk and the first question I got was so off the wall that I initially hesitated. Dave jumped right into the breach with an “I’m sorry Andrew but we’re out of time” – I think I owe him a beer. The symposium talks were great and led to my second favorite metaphor of the trip. After his talk on how altered selection environments might cause evolution in salmon, Robin Waples was asked about the best strategy for restoring populations to places from which they have been extirpated (or just helping them to persist under environmental change). Does one attempt to pick particular genotypes/phenotypes best suited for a given restoration site or does one just mix up a bunch of genotypes/phenotypes into a great big ball of heterozygosity and let selection sort it out.

Dinner that night allowed us to test the great big ball of heterozygosity idea – although not in the way that might immediately leap to mind. We ate at the Doug Fir, a bar with the weirdest bathroom I have ever seen. A bunch of us (from the UK, various parts of the USA, Canada, Finland, and several other countries) tried out the bathroom, and if survival depended on a quick pee, we would all be selected against. Instead it seemed that phenotypic plasticity – particularly learning – was the key: navigation was a lot easier as they night drew on, opposite to the usual progression. 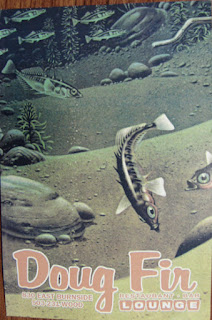 In a random act of bizarre coincidence that ties together my two conferences, one of the advertisements on the tables at the bar had a background painting of a bunch of mating stickleback. I furtively stole some, then fessed up to a waiter who then told me to help myself to a huge stack they had by the entrance. I grabbed about 20 and they have already almost all been snapped up by my lab and other folks. After the Doug Fir, it was off to a series of other bars for a drink here and there for drinks with Kathryn Turner and Juha Merila. I ended the night at a bar with a ping pong table. Several drinks and games later I was the champion – at least I think I was.
By Andrew Hendry - August 15, 2012