From the Red Light District to Eco-Evolutionary Stability

I just returned from the Netherlands Annual Ecology (NAEM) meeting, where I spoke about Eco-evolutionary Dynamics, essentially an overview of this emerging field. The meeting itself was in Lunteren, in the central Netherlands, but I spent the first few days in Amsterdam – because the only way to get a reasonably priced flights to Europe is to stay over a Saturday night. In essence, you can either pay for a hotel and meals for a few days or you can pay the same amount to the airline. Not having previously spent any time in Amsterdam, the choice was easy. 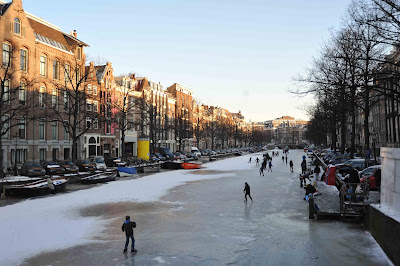 It was damn cold, sometimes well south of -10 C. Now I realize that this isn’t cold compared to Montreal but it sure seemed cold for Amsterdam. Yet the Dutch were loving it. The canals had frozen over and many people were skating on them. Given that the building around the canals were 500 years old, it was almost like some scene out of one of those old Dutch paintings. For someone used to hockey skates, even those straight blades looked like they were a hundred years old. Even if the Dutch were loving it, I got the distinct impression that the birds were not – especially the coots. They were wandering aimlessly over the ice or hunkered down on top – almost as if hoping to melt their way through to the food beneath. As an evolutionary biologist, I immediately thought of that 110 year-old study by Herman Bumpus, where he measured birds that were or were not killed by a severe winter storm in Chicago. That was perhaps the first study to actually quantify natural selection on phenotypic traits in natural populations. I hope someone is out there measuring the coots and other birds that live and die during this event (a postdoc told me how a bunch of his tagged oystercatchers were turning up dead). But the citizens of Amsterdam seemed determined to keep Darwin out of the canals by throwing large amounts of dog food out onto the ice for the coots and gulls and swans. 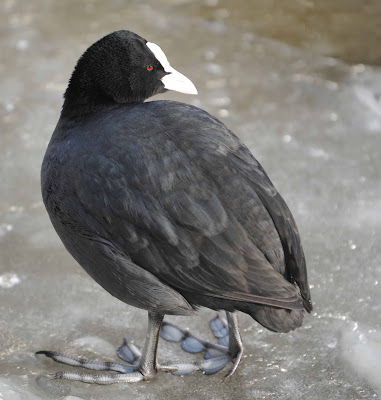 Yet even if natural selection was thwarted, sexual selection certainly wasn’t – in the Red Light District at least. As if mocking the weather – and teasing those caught in it – dozens of women in lingerie postured (or sending text messages on their cell phones) from behind glass doors while potential clients shivered and shuffled by outside. Window shopping for warmth! (I would have been more tempted to knock on the door of a kindly old woman selling steaming hot chocolate.) Even church goers could choose (it was Sunday) among dozens of women behind glass doors in a ring of buildings encircling the Old Church; an ever tightening noose of “tolerance” around a last bastion of purity.

But enough of natural and sexual selection in chilly Amsterdam – I was in the Netherlands for a scientific meeting! NAEM was attended by about 300 ecologists of all stripes. My task, along with another plenary speaker (Luc De Meester), was to make a case for the ongoing fusion of ecology and evolution: the “newest synthesis” according to Tom Schoener. In essence, I made the case that contemporary (or “rapid”) evolution has an ongoing role in shaping the short- and long-term dynamics of populations, communities, and ecosystems. At the end of my talk, I outlined a series of predictions for when eco-evolutionary dynamics should be important in natural populations. Many of these predictions logically centered around situations where changes in traits are most rapid and therefore most likely to visibly alter ecological processes.

But I am not so sure anymore – maybe stasis and the lack of change also reflects strong, maybe stronger, eco-evolutionary dynamics. The basic idea is that constancy through time in ecological processes (population size, community richness, productivity, or whatever) or traits might be the result of ongoing evolutionary change that enhances stability. Here are several ways in which this might play out.

In each of the above cases, and others, phenotypes and/or ecological processes would remain relatively constant but, if one had turned off the evolution, large changes would have occurred. Perhaps, then, the strongest eco-evolutionary dynamics underlie stability rather than change. On the one hand, this might mean that eco-evolutionary dynamics are even more common than we currently imagine. On the other hand, it also suggests they might be harder to study. Either way, we should expand our research focus so that it isn’t restricted to situations where large changes are observed. Although some have argued that this current focus creates a positive bias toward situations of strong eco-evolutionary dynamics, I am here suggesting that a negative bias is also possible.