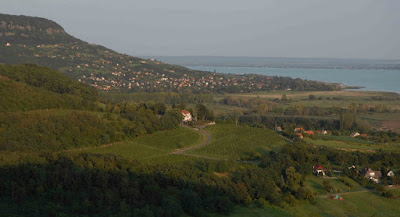 On the steamy shores of Lake Balaton in central Hungary was recently convened the “Niche theory and speciation” workshop, hosted by Geza Meszena, Liz Pasztor, and colleagues. Three days of talks were interspersed with opportunities for discussion and debate. A favourite, or at least convenient, venue for debate was the hotel lounge, with a beer or wine in hand and entertainment provided by retirees tripping the light fantastic on the dance floor while an aging trubidor on a synthesizer played the “classics” suffused with a distinctive Hungarian flavour. Somehow the normally stale debate about sympatry versus allopatry gains a new vitality against the backdrop of whirling gray (or overly black) hair and a tinny synthesized “Ring of Fire.”
So just what are “niches” anyway, aside from some set of conditions that are (or might be) occupied by a particular species? Are they Hutchinsonian, Grinnellian, Eltonian, or other? Are they alpha or beta, fundamental or realized? Are they properties of the organisms, the environment, or both? Can a niche exist without an organism occupying it? To what extent do organisms create or destroy niches for themselves and other organisms? Despite much discussion, no agreement was reached – because the different concepts are differentially useful in different contexts. In the end, however, the truth is – as someone pointed out – that “we can’t define them but we know them when we see them.” With this in mind, we can ask how niches might influence speciation.
For instance, one might ask how critical distinct niches are for speciation. Is speciation is always ecological (adaptive) or can it also be non-ecological (non-adaptive)? Bob Holt was happy to champion the potential importance of non-ecological speciation, whereas many adaptive dynamicists remained sceptical. Nevertheless, at least three talks were given on non-ecological speciation, including two on the “neutral theory of speciation.” (Just when I thought Hubbell’s theory was finally waning, it again rears its unrealistic head.) But to be more honest, the presenters merely wish to explore this theory as an interesting mathematical problem – or as a null model – rather than to assert it really was an important contributor to the diversity of life. And yet, as Michael Kopp pointed out, the pesky theory does often seem to get the right answer (predicting real patterns of biodiversity) even though it is presumably for the wrong reason. So although that neutral stuff is all very elegant, we might as well get back to considering the important thing in the evolution of diversity: niches.
Does increasing competition for one niche favour shifts to new niches – as theory predicts or assumes? Of course it does – right? Well, Christine Parent showed that flour beetles stubbornly refuse to obey the laws of niche theory – no matter how often you explain it to them. Other topics of discussion ranged from the classic and general to the new and specific. On the classic end of things, no meeting on speciation would be complete without an impassioned debate on allopatry versus sympatry versus parapatry. Nearly everyone recognized that sympatric contributions to speciation would be most effective following an initial period of allopatry, which led to Ole Seehausen’s pithy observation that perhaps “allopatry is necessary for sympatric speciation.” And, of course, one always needs a vigorous discussion as to whether or not the terms themselves are even useful. In response to a disparaging comment on this point Jon Bridle, Jim Mallet was clear to assert that what he really meant in his earlier statements was “APPROXIMATELY sympatric” and “APPROXIMATELY allopatric.” A new addition to the lexicon of evolutionary biology?
As for the more specific, I was intrigued to learn that a persistent problem in the theoretical world is whether or not continuous coexistence (essentially a very large number of species that partition themselves very finely along a continuous resource gradient) is possible. And the answer proved to be ... YES ... or NO ... or maybe - depending on who was speaking. But, of course, this is a theoretical question since it never happens in nature, which then contributed to a long discussion on the frequent disconnect between theory and empirical data.
And then there were the two hours a small group of us spent debating Joel Brown’s unified theory of human evolution – this one decidedly not based on a neutral theory. Weaving a beautiful adaptive tale with liberal anecdotes from squirrels, culture, politics, and G functions, Joel constructed a convincing simultaneous explanation for those three traits that among the mammals are unique to humans: high maternal mortality at birth, menopause, and concealed ovulation. At least I think he did.
By Andrew Hendry - September 05, 2011