In science, it is both boring and annoying when everyone agrees. Once that happens, what is there to talk about? That is why every working group, talk, or paper needs a Devil’s Advocate. Devil’s Advocates make things exciting. They make things move. They break a discussion or project out of lethargy and complacency, and they cause everyone to crystallize their arguments and ideas and explore new ground. Where would we be without them?

But what if there were too many? What if everyone was a Devil’s Advocate? What would happen then? Maybe nothing. Maybe everyone would be too critical and nothing would move forward. Maybe everything would bog down and nothing would get achieved. That is why every working group, talk, and paper also needs a God’s Advocate. A God’s Advocate sticks behind an idea, selling it to sceptics, and fighting the Devils’ Advocates to some middle ground – a place where progress is made in some new area and is backed with the best possible logic and clarity. 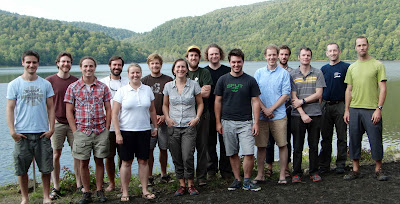 Just a few weeks ago at Gault Nature Reserve on Mt. St. Hilaire, we convened the second meeting of the Quebec Centre for Biodiversity Science (QCBS) working group on Eco-evolutionary Dynamics. (For a dispatch from the whisky-soaked first meeting, see http://ecoevoevoeco.blogspot.com/2011/01/whisky-rescue.html) The main goal of this meeting was to figure out how quickly ecological function evolves. It is now well known that traits can evolve quickly, although they don't always do so, and that some such changes can have ecological effects – but how common is this and on what time scales does it play out? To this end, we compiled databases that examined how quickly ecological function evolves. A few such datasets exist but they aren’t common, and so we also sought to determine rates of change in traits likely to have ecological function, such as body size or trophic position. Jonathan brought his carnivores, Bea and Nicholas brought their zooplankton, Chris and Eric P brought their fish, Hans brought his dinosaurs (what else), Nash and Mark brought their plants, Andrew and Mart brought their contemporary evolution, Fanie and Eric V brought their R and found some birds, Matt brought his model, Gregor brought his Matlab, and David even brought a manuscript!

It turns out that traits evolve – duh - all types of them and at all sorts of different rates. One pattern in particular emerges in almost every dataset: changes can be rapid over short time frames but don’t continue to accumulate into large changes on longer time frames. Kind of like a ball bouncing around in a closed room – fast in any given direction until it hits a wall and then fast in another direction. This isn’t a new result, of course, and so what should we do then? How can we make an important contribution to eco-evolutionary dynamics and go beyond this already recognized pattern? Here was where the advocates – both Devil’s and God’s – came into play. Ideas were raised and trashed and raised and trashed. Sometimes they rose from the ashes of a previous trashing. Sometimes they were never heard from again. And sometimes they just bounced around in that closed room – never coming to rest, but also never getting anywhere.

To my way of thinking, both types of advocates were critical. We came up with some very original and cool ideas for how to analyze rates of evolution – and we used them to find some perhaps surprising patterns in the data that originally seemed to say the same old thing. The new metrics have their limitations, of course, but which metric doesn’t? And they allow us to think about the problem in new ways. I won’t tip our hand in this blog and I could say this was because that the paper is coming soon to an important journal near you. The truth, however, is that the Devil’s Advocates are still doing their job – and so God’s Advocate must find that ultimate magic that finally lets the ball bounce out of the room and into the wide world. Stay tuned for the third meeting. 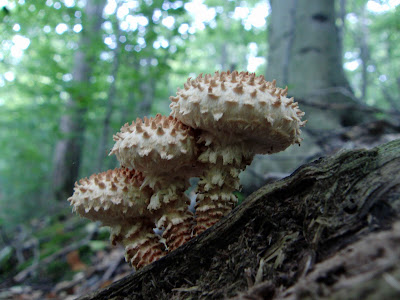 Mark was missing from the photo -sorry - but perhaps he was checking out these cool shrooms!
By Andrew Hendry - September 17, 2011