When and How (Not) to Write a Review Paper

"Hey, we should write a review paper!"

Raise your hand if you have said, or heard, this sentence....  Or, the close cousin of this sentence: "You should write a review paper and submit it to ___journal_name____", sometimes spoken by Editors seeking to game the citation and impact factor system. (Publishing more reviews is an easy way for journals to boost their IF).

We (Dan Bolnick and Andrew Hendry) recently collaborated on a review paper. We are honestly excited by the topic, and feel like we had something useful to say that would help shape people's view of the topic (especially newcomers to the field). But the process of wrangling 20 people's opinions - authors and reviewers and editors - into a coherent text was like the proverbial herding-cats, but with really big cats.  Big grumpy cats. That's not the fault of any one (or group) of co-authors, it's just what happens when people with many different views and time constraints and agendas try to work together on something that is nobody's number-one-priority.

And, at the same time, we are both involved in multiple other review papers simultaneously. Some of these are papers we really feel convey a new idea in a compelling way. Some of them were aggressively solicited by journals. We started emailing back and forth to commiserate about the joys and headaches of review papers. We both feel like we are probably overdoing the review paper thing. Which led us to wonder, when is it good, versus bad, to dive into writing a review? What are the pros and cons? How do you tell which review papers are worth your time, and which are not?

It's easy to hate on review papers, and complain that they are just soap-box pontification. Just people gaming the citation-driven academic system. But then, we all can also think of great review papers we've read. Papers that helped us learn the layout of a subfield or topic outside our usual expertise.  Papers that made us think differently about a familiar topic. Papers we found valuable to assign as reading for a graduate or undergraduate class to introduce newcomers to a topic. They are also great for senior scientists making a lateral move between fields. For instance, Dan has had a shift in the past 10 years into more evolutionary immunology, and found review papers immensely helpful in learning this complex field in a semi-efficient way.

Note, there are some other blogs on the topic of review papers. For instance, Andrew did an old EcoEvoEvoEco blog about citation rates to his reviews versus other papers:

And Steve Heard wrote one too. We didn't read Steve's blog in advance of this one, to not bias our own opinions *.

(* or perhaps because we were lazy)

1) Should you write a review paper (a handy flow chart)

Other people seem to think that everyone should write a review paper, and require their graduate students, or even students in graduate courses, to write and submit review papers: 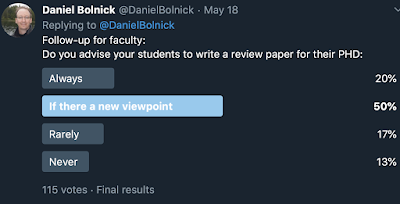 And pretty much every working group that has ever convened at NCEAS, NESCENT, NIMBioS, iDiv, or other such institutes or centers, feels an obligation to write a review.

Our view is that there are times for reviews, and times not to review. For every thing, turn, turn, turn, there is a synthesis, turn, turn turn.  The question is, what's a good reason, what's a bad reason? Well, to help you in your deliberations, here's a handy and mostly tongue-in-cheek guide: 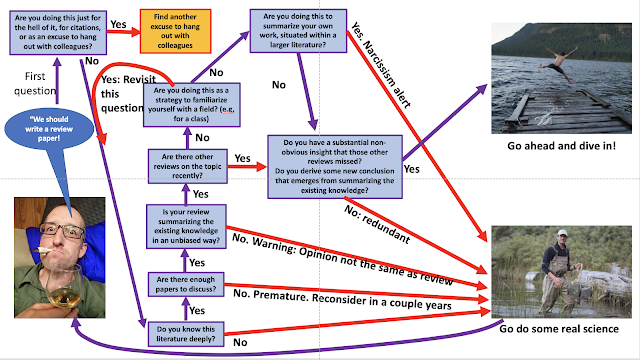 2) Pros and Cons of writing a review paper

Note, however, that Andrew and Dan may be in the minority in this regard. A twitter poll found that a majority of unscientifically sampled people had empirical papers as their most cited. 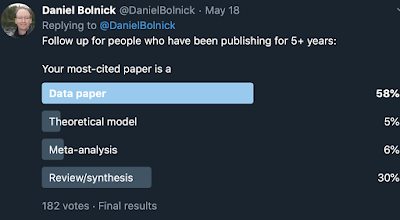 
3) Do's and Don'ts of writing a review paper


4) Life cycle of a research topic and key moments for reviews..

When to review, when not to review? That very much depends on the state of the research topic you want to write about. A quick guide: 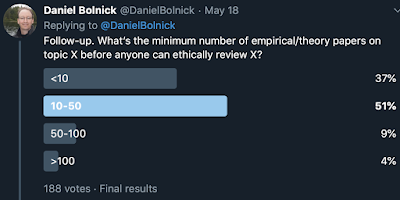 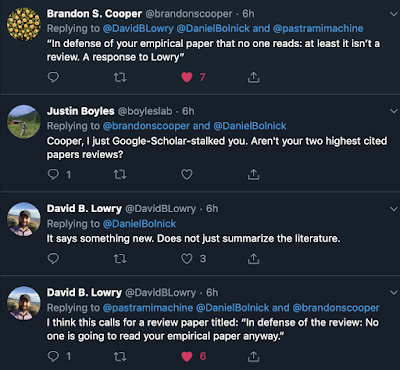