Descent with Modification: The Evolution of a Conceptual Figure

Almost every student talk – and many by postdocs and profs – starts with a conceptual diagram linking ideas and concepts. The simplest possible version of such a diagram for eco-evolutionary dynamics is two boxes, one for ECOLOGY and one for EVOLUTION, with arrows linking the two. This figure still leads many talks as a way of emphasizing the fact that researchers have long focused on the arrow from ECOLOGY to EVOLUTION but not the reverse, which has recently become the primary new emphasis of research in Eco-Evolutionary Dynamics. 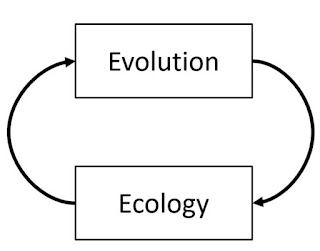 Starting from this simplest framework, I developed an expanded – but still simple – version that sought to make several key points explicit. First, phenotypes are the true nexus of eco-evolutionary dynamics because it is PHENOTYPES (not genotypes) that are under direct selection and it is PHENOTYPES (not genotypes) that have ecological effects. Thus, arrows from ecology to evolution and back must flow through phenotypes. Second, the direct effects of phenotypes on one ecological level (e.g., populations) can cascade to indirect influence other ecological levels (e.g., ecosystems). 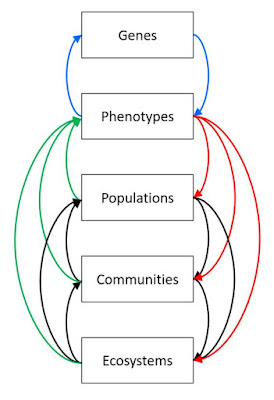 I tried to unearth out when I first came up with this figure and was unable to be definitive. However, it was first published in Bailey et al. (2009), a New Phytologist “Forum” describing a symposium on eco-evolutionary dynamics at the ESA meeting in Albuquerque, New Mexico, in August of 2009. I had used the figure in my talk at that symposium. Another early appearance was an F1000 Biology Report that I did with Eric Palkovacs in 2010. Since those uses, the figure has become widely used in various publications and talks (and my book) as a simple intuitive way of conceptualizing eco-evolutionary dynamics.

In short, the basic figure has stood the test of time, largely without revision for almost 10 years. However, almost every time I show it, I end up having interesting discussions with someone about how it could perhaps be improved. In nearly all such cases, I have convinced myself that no change was necessary but, twice now, I have been compelled to admit that it could be better. The first time came during a “the genomic of eco-evolutionary change” symposium and workshop in Monte Verita, Switzerland, in 2016. Victoria Stork pointed out during her talk that my use of “genes” at the top of the figure ignored other, potentially important, genomic changes that influenced phenotypes and could therefore have ecological effects. Epigenetic changes, such as DNA methylation, are perhaps the most obvious example. At this point, my book was basically done and at the printer but I was able to add “genomes” to “genes” at the last minute. My intent in doing so was be inclusive of people studying epigenetics. 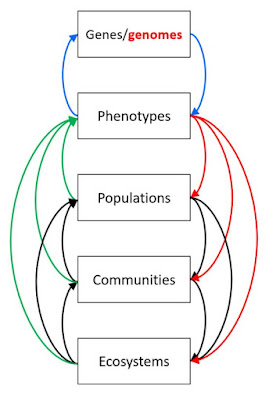 The second time I have felt compelled to make a change came just last week at a “significance of sexual selection for population fitness” workshop, again in Switzerland – but this time in scenic Fafleralp and organized by Claus Wedekind. I gave a talk on the first night of the meeting and, afterward, several people – most notably Jacek Radwan – argued for the addition of an arrow directly from population dynamics to genes (bypassing phenotypes). The most obvious reason for such a pathway would be that small population sizes can lead to genomic changes through inbreeding or drift, which could then have phenotypic effects with ecological consequences. I had heard this argument before and had not been convinced, because I felt that the effects still had to flow through phenotypes. This time, however, the argument was clearer to me because I had been specifically talking (and therefore thinking) about the genetic effects of population size. 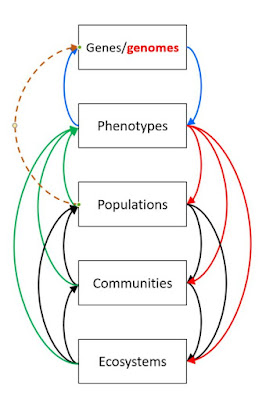 Specifically, I now agree that small population sizes can directly influence genomes without having to pass through phenotypes, with my apologies to those who made this point previously and I dismissed it. However, I still think that effects of genomes BACK to ecology must flow through phenotypes. That is, inbreeding and drift will change genomes but they will have ecological effects only if those genomic changes modify organismal fitness (leading to a phenotypic effect on population dynamics that could cascade to indirectly influence communities or ecosystems) or traits (a potential direct effect on communities and ecosystems).

Here’s hoping no more major changes are needed. Or, wait, maybe not. Keep ‘em coming – just realize it might take me years to agree!