I have the Imposter Syndrome.

At a recent meeting, I had a long discussion with a student about their struggles with the imposter syndrome - not just having it, but even admitting they had it. I was moved and inspired. I asked the student if they wanted to post their story on my blog, anonymously if they chose. So here it is. I hope you find it as helpful, honest, and - indeed - inspiring as I did. (Andrew).

A few months back I was chatting with a friend and collaborator about my post-doc plans and options. He kept throwing what I felt were outrageous suggestions at me, funding that I wasn’t competitive for at all. I brushed the suggestions off. I told him that I would look into it, but needed to think more realistically, that I wasn’t in that league. He cut me off and said, “you need to get over this imposter syndrome thing.” To which I laughed and responded, “imposter syndrome? I think I have anti-imposter syndrome.”

I know anti-imposter syndrome is not a thing. But I really did not identify with the way that I heard imposter syndrome described. I had heard young PhD students talk about it as though it was an inevitable consequence of their genius. It was almost like humble bragging – “Oh of course I have imposter syndrome, I’m at _______“ (insert ivy-league institution of your choice here). I’ve never heard someone from a lesser esteemed school make such a claim. No, we know we are the academic scraps, having been rejected from far better schools for various reasons. Or at least that’s the mindset many of us have. I felt like people routinely under-estimated me. I don’t have imposter syndrome, I told myself. Quite the opposite, I was trying really hard to be accepted into a world I had longed to be a part of for so long. I knew that I would prove myself worthy if given the chance. I had so much confidence in myself and my abilities. I had an “I’ll show you who I am” kind of attitude, and it worked for me. 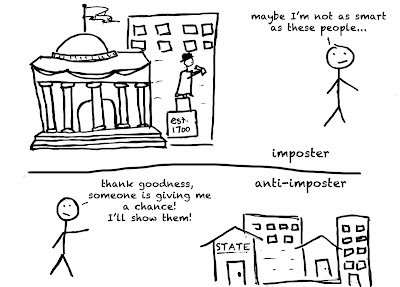 Actually, it worked really well for me. Doors opened. Connections were made. Suddenly I was receiving awards and praise from some well-known people. People not only accepted me once they saw what I was capable of, but for the first time in my academic career, people had expectations of me! Overnight it went from “who are you” and “you’ll probably fail but go ahead and try” (yes that was actually said to me), to “you always give such great talks” and “I can’t wait to see the results from your next project.”

And with that my friend’s words came storming back into my mind. Maybe I did have this imposter thing after all? For so long I believed in myself when few others did. I had felt like I belonged somewhere that I wasn’t being accepted into. I felt a need to prove myself. And now that things were finally falling into place and I was accepted, I couldn’t shake the thought that “maybe they were right all along, I don’t belong here.” I felt myself spiraling into an anxiety induced despair as I stressed over not having published enough. This was fueled by comments from mentors like “you know your reputation exceeds your publication record” and “you have so many publications on this topic, oh wait, you only have 2?” And the chasm between my metrics of success and people’s opinion of me seemed to grow at an ever-quickening pace.

But I was still not willing to accept that I had imposter syndrome. Things came to a head over a 72 hour period at a recent conference. Expectations were high, reinforced by nearly every conversation I had. “Please expect less of me” I found myself timidly asking people. This was not me. I am not timid. My self-confidence was shattered and I couldn’t put my finger on why. I ignored it. I tried to psych myself up. But my usual mantra of “I’ll show them” was no longer valid. Instead I was grappling with an internal monologue along the lines of “I have to show them again. And again. And again. And if I don’t, they’ll know they were right before, that I don’t belong here.” I was one talk away from people realizing I was a one-trick pony, one conversation away from people losing their confidence in my abilities, one failure away from the confirmation of “you don’t actually belong here.” I felt like I was caught in a storm of expectation and praise that was wholly unwarranted and that I couldn’t possibly live up to.  I wasn’t worried that I wouldn’t give a good talk. I know I give good talks, it’s one of my strengths. But I was paralyzed with fear that silently people would be thinking “oh this is crappy science” and “her previous work was so much better, what’s this nonsense?”. And maybe this is where the root of my imposter syndrome comes from. I perform well, but that doesn’t mean my ideas are good – maybe people are just blinded by the well-thought out presentation and pretty slides and not impressed by the science itself.

The night before my talk I sent a couple of text messages to trusted friends admitting that my confidence was gone and that I was struggling with expectations. The next morning I woke up to a flurry of messages reassuring me. Before my talk I spoke with a friend about what I was feeling in person and she reassured me that she often felt that way too, and that I had no reason to doubt myself. My confidence temporarily bolstered, I stood up and delivered a great talk that was well received. And I realized then that I could never let myself get that worked up about expectations again. More importantly, I realized I needed to talk to people about this. And so, the rest of the conference I talked to some of my conference buddies about this “imposter” feeling I’d been having. I was shocked at how many people responded by telling me that they were dealing with it too. People who I admire, consider successful and confident, and who I wouldn’t have guessed experience this. Sharing our experiences was cathartic for me. 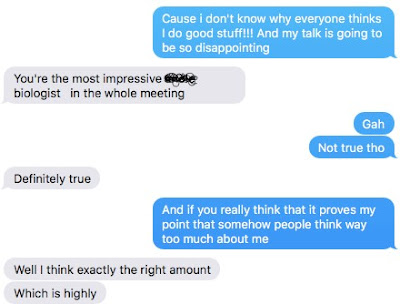 I’m sharing this story because I’ve been told it’s a unique perspective on imposter syndrome. Maybe it is, maybe it isn’t. My story isn’t meant to teach you about imposter syndrome, or to describe what everyone feels. It’s my story, that is all. I agreed to post this because I didn’t think my experience fit with what I understood imposter syndrome to be. But when I was able to give a name to it and talk about it with others, then I could start moving past it. Who knows, maybe someone out there is reading this thinking “Hey, that’s my experience too!” And maybe this will help them begin to deal with it. I hope that someday I’ll move past this entirely, and that self-doubt will be fleeting and merely a check of my humility. Until then, I’ve found a few strategies that keep me grounded when I begin to doubt myself:

1.     I re-assess my self-worth. I now keep a list of the compliments I get and screenshots if they are in digital form. I look at them to remind myself that I do belong and that the people I trust believe in me.

2.     I remind myself that I’m on track and re-assess my metrics of success. When I stress about my pace of productivity, I look up the CV of a young career scientist. Nine times out of ten, I’m right on track when I look at the pace and number of publications. Keeping my expectations and comparisons realistic is important. I’m right where I should be at this career stage, and I’m on pace to be where I should be at the next. More importantly though, I remind myself that everyone progresses at a different pace and there is no universal standard of success.

3.     I reinforce my accomplishments. I made a list of all of my awards, grants, invited talks, etc. When I need a little extra boost I look at the list to remind myself that so many people couldn’t possibly be wrong about my potential and my abilities.

4.     I talk about it. Not to everyone, but I have talked about this with a few trusted people and have been surprised to learn that they had similar feelings. This issue is far more common than we think it is. It is comforting to know that people I look at as confident and successful are dealing with this too. I can’t help but think if people were more open about this topic, then maybe I would have talked it through with my mentors instead of having a near meltdown over it.

One final note, I have chosen to post this anonymously for several reasons. Feeling like this is a mental health issue that I do not want to be associated with is not one of them. On the contrary, I will gladly talk / commiserate with you in person. However, I did not want to open myself to judgement, assumptions, or personal attacks from people I do not know. I also did not want to invite personal compliments – this was not a humble brag and I don’t want you to tell me I’m awesome because you think I need to hear it. Actually, I think that would be counterproductive. To my friends, you probably know I wrote this, so thanks for being awesome. To those who don’t know who wrote this, I’m probably your student, post-doc, colleague, collaborator, or conference buddy – think about that.
By Andrew Hendry - August 23, 2017