The World Without Evolution 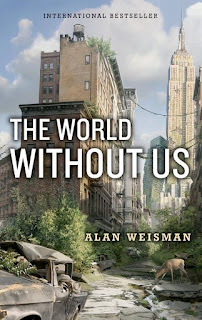 Nine years ago, Alan Weisman posed the scenario “The World Without Us.” The premise was that, all of a sudden, people disappear entirely from the world. "What happens next?” The rest of the book described the slow decay of buildings, roads, bridges, and other infrastructure, and the gradual encroachment of wildlife on formerly human dominated landscapes. The same scenario has been postulated in various movies, including Twelve Monkeys, where humans dwelling underground send out hazmat-suited convicts to collect biological samples from the surface in hopes of a cure for the devastating disease that destroyed most of humanity. The images of lions on buildings and bears in streets can seem as jarring – ok maybe not quite as jarring – as the Nazi symbols on American icons in the Amazon.com adaptation of Philip K. Dick’s The Man in the High Castle.

The premise of this blog post is related – but even more dramatic – what if evolution stopped – RIGHT NOW? What would happen? The context for this question is rooted in my recent uncertainty, described in a paper and my book, about how eco-evolutionary dynamics might be – mostly – cryptic. That is, whereas most biologists seek to study eco-evolutionary dynamics by asking how evolutionary CHANGE drives ecological CHANGE (or vice versa), contemporary evolution might mostly counteract change. A classic example is encapsulated by so-called Red Queen Dynamics, where it takes all the running one can do just to stay in the same place. More specifically, everything is evolving all around you (as a species) and so, if you don’t evolve too, you will become maladapted for other players in the environment, which will cause you to go extinct. The same idea is embodied – at least in the broad-sense – in the concept of evolutionary rescue, whereby populations would go extinct were it not for their continual evolution rescuing them from environmental change.

So how does one study cryptic eco-evolutionary dynamics? The current gold standard is to have treatments where a species can evolve and other treatments where they cannot, with ecological dynamics contrasted between the two cases. The classic example of this approach is that implemented by Hairston, Ellner, Fussmann, Yoshida, Jones, Becks, and others that use chemostats to compare predator-prey dynamics between treatments where the prey (phytoplankton) can evolve and treatments where they cannot. This evolution versus no-evolution treatment was achieved by the former having clonal variation present (so selection could drive changes in clone frequencies) and the latter having only a single clone (so selection cannot drive changes – unless new mutations occur). These experiments revealed dramatic effects of evolution on predator-prey cycles, and a number of conceptually similar studies by other investigators have yielded similar results (the figure below is from my book). 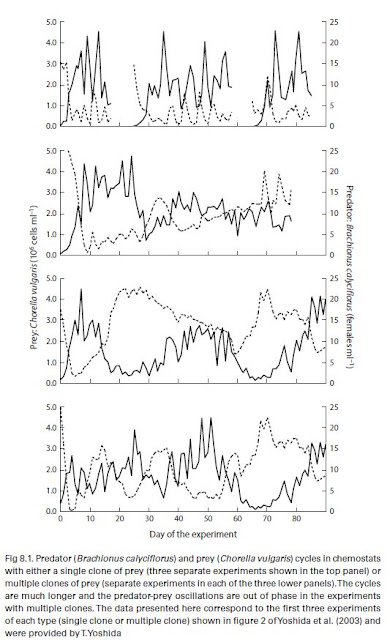 All of these studies – and others like them – impose treatments on a single focal species, and so the question is “what effect does the evolution of ONE species have on populations, communities, and ecosystems?” Estimates of the effect of evolution of one species on ecological variables in nature, regardless of the method, are then compared to non-evolutionary effects of abiotic drivers, with a common driver being variation in rainfall. These comparisons of "ecology" to "evolution" (pioneered by Hairston Jr. et al. 2005) generally find that the evolution of one species can have as large an effect on community and ecosystem parameters as can an important abiotic driver, which is remarkable given how important those abiotic drivers (temperature, rain, nutrients, etc.) are known to be for ecological dynamics (the figure below is from my book). 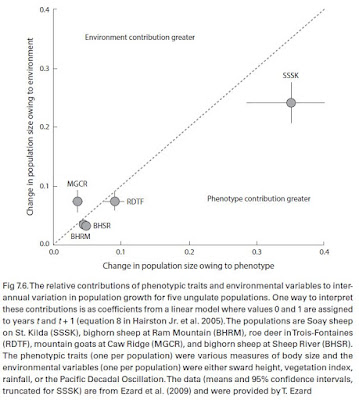 A more beguiling question is “how important is ALL evolution in a community?” Imagine an experiment could be designed to quantify the total effect of evolution of all species in a community on community and ecosystem parameters. How big would this effect be? Would it explain 1% of the ecological variation? 10%? 90%? Presumably, evolutionary effects of the whole community won’t be a simple summation of the evolutionary effects of each of the component species. I say this mainly because studies conducted thus far show that single species – albeit often “keystone” or “foundation” species – can have very large effects on ecological variables. A simple summation of these effects across multiple species would, very soon, leave no variation left to explain. Hence, the evolution of one species is presumably offset to some extent by the evolution of other species when it comes to emergent properties of the community and ecosystem.

It is presumably impossible to have a real experiment with evolution and no-evolution treatments at the entire community level in natural(ish) systems. We must therefore address the question (What would happen if all evolution ceased RIGHT NOW?) as a thought experiment.

I submit that the outcome of a world without evolution experiment would be: 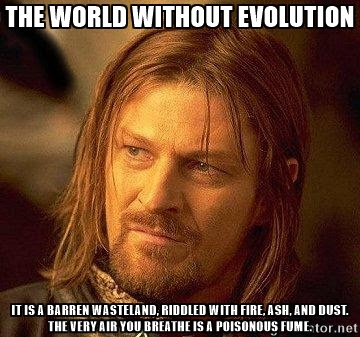 The above sequence, which I think is inevitable, suggests several important points.


1. Microbial diversity – and its evolution – is probably the fundamentally irreducible underpinning of all ecological systems.

2. Investigators need to find a way to study the eco-evolutionary STABILITY, as opposed to just DYNAMICS.

3. Evolution is by far the most important force shaping the resistance, resilience, stability, diversity, and services of our communities and ecosystems.

Fortunately, evolution is here to stay!