[ This post is by Sarah Fitzpatrick; I am just putting it up. –B. ]

In Trinidad, nicknames for guppies include "millions fish" and "drain fish" due to their plentiful abundance and unique ability to tolerate an incredible range of environmental conditions. Guppies are found everywhere from the most pristine streams in the Northern Range mountains to ditches along the side of the highway and even in highly oil-polluted environments. In other words, this species can hardly be considered one of conservation concern. But, thanks to quick generation times and decades of research on the predictable variation in traits and fitness of populations found in different environments, Trinidadian guppies have become a textbook example for studying evolution in the wild. 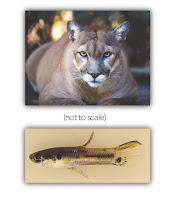 Genetic rescue is an increase in population size caused by the introduction of new alleles, by more than the numerical addition of immigrant individuals. The iconic example of successful genetic rescue is the Florida panther that nearly went extinct in the early 1990s. The few panthers that remained at this time all showed severe signs of inbreeding depression caused by mating between close relatives. Left with few options, wildlife managers introduced eight female panthers from Texas into Florida and the population has since rebounded dramatically due in large part to the recovery from inbreeding depression and high hybrid fitness.

Concerns over maladaptive effects of gene flow and outbreeding depression (reduction in fitness when divergent populations or species are crossed) have restricted the use of genetic rescue as a management tool to just a handful of extreme cases, like the Florida panther. Yet, genetic problems associated with isolation and small populations, like inbreeding depression and lack of variation to adapt to a changing environment, are major threats to fragmented species.

Making use of the wealth of background knowledge on guppies we set out to two headwater streams in Trinidad to test whether gene flow from a genetically and phenotypically divergent source population would cause genetic rescue or outbreeding depression.

We measured genetic variation and monitored population size and survival in two native focal populations of guppies for several months before non-native guppies that were adapted to a different environment were introduced upstream from our focal populations (as part of a separate experiment). Having been long-isolated in small headwater streams and likely originally colonized by only one or several individuals, the native populations started out with tiny effective population sizes (Ne = 2–10) and were likely experiencing inbreeding. 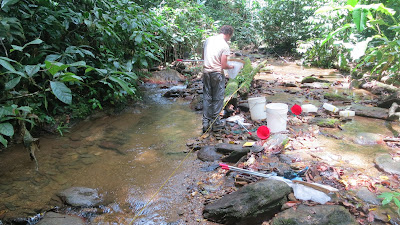 
Gene flow began as non-native guppies swam or were washed downstream and began mating with the native guppies. Our field team visited the two focal populations each month for two and a half years and caught all guppies over 14 mm (about the width of your thumbnail) using traps, mask and snorkel, and butterfly nets. All fish each month were weighed and photographed and all new recruits to the population were given a unique colored tattoo under a microscope and had three scales removed for genetic analyses before being returned to their exact site of capture. In total, over 10,000 guppies from the two streams were individually marked, monitored throughout their lifetimes, and could be classified using molecular markers as a pure native guppy, a pure immigrant, or a hybrid. This study was novel in its ability to capture the initial and long-term effects of gene flow on survival and population dynamics in replicated populations in the wild. 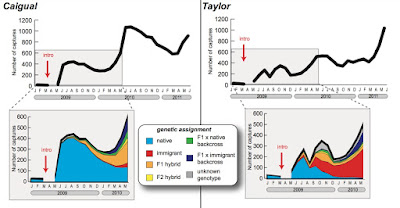 Thick black lines indicate total number of guppies > 14mm captured in each stream over time. Grey boxes correspond to the timeframe in which every individual was genotyped at microsatellite loci for classification into genetic ancestry groups. Colors show the number of individuals in each genetic group caught each month.


Despite gene flow from guppy populations that were originally divergent and adapted to a different environment, genetic rescue was documented in both streams. Monthly population sizes skyrocketed from under one hundred to over one thousand individuals, genetic diversity increased substantially, and importantly, much of the success could be attributed to hybrid guppies.

Though guppies themselves are not endangered, the small, native guppy populations in this study could be thought of as proxies for other genetically isolated, imperiled populations. Model systems in evolution might become increasingly crucial for conservation if understanding and manipulating evolutionary processes indeed proves to be one way to curb unprecedented rates of biodiversity loss.