Like it or not, intense trophy hunting causes evolution of small horns in mountain sheep

[ This post is by Marco Festa-Bianchet at Université de Sherbrooke, I am just putting it up. –B. ]

In most of Canada, mountain sheep (Ovis canadensis and O. dalli) rams are hunted based on a minimum horn curl: it is illegal to shoot rams with small horns.  There is no quota for residents of the province or territory; the harvest is only limited by the availability of ‘legal’ rams, like the unfortunate 4-year-old in the picture.  Selection against ‘legal’ rams is very strong, as the harvest rate is likely between 30% and 60%. Horn size affects reproductive success, but mostly for mature rams who can serially defend estrous ewes.  A ram with rapidly-growing horns may become a highly successful breeder if it survives to 7 years, but it may be legal at 4 years, and the hunting season is before the rut.  In other words, the selective pressure of the hunt sets in 2–3 years before the fitness benefits from sexual selection.  Like many morphological traits in mammals, heritability accounts for about a third of variance in horn size.  In Alberta, the 4/5-curl rule illustrated in the picture has been in place for about 50 years in nearly all provincial lands where hunting is allowed – a wide geographical area. If one wanted to select for small horns, one could do a lot worse. 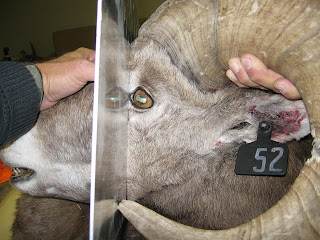 Ram 642 was shot at Sheep River, Alberta, at 4 years of age.  The plexiglass illustrates the field rule to assess the definition of ‘4/5-curl’: the horn tip intercepts an imaginary line from the base of the horn to the front of the eye when viewed from the side.  Few 4-year-old rams have horns this large, and large horns do little to improve the reproductive success of rams younger than about 7 years.  If ram 642 had grown one less cm of horn, it would have been illegal to kill him.  Photo from Alberta Fish & Wildlife.


We first tested the hypothesis that hunting could drive evolution in mountain sheep in a paper in Nature in 2003, based on the deep pedigree of the Ram Mountain population, monitored since 1972.  We showed that breeding values for ram horn length had declined over about 5 generations.  The genetically correlated trait of ram body mass, not a direct target of artificial selection, also declined.  Ours was the first suggestion that selective hunting could lead to evolutionary change, and it attracted substantial interest.  Unfortunately, it was also used to promote an anti-hunting agenda, leading to much heaping of poison over our research by several pro-hunting groups and individuals.  Some media coverage implied that any trophy hunting would lead to an evolutionary response.  That is unlikely.  In bighorn sheep, the combination of age-specific effects of horn size on male mating success, unlimited harvests, and strong heritability of horn size create conditions favoring an evolutionary response to artificial selection; those conditions may or may not exist in other species.  For example, in chamois and mountain goats an evolutionary response to trophy hunting is unlikely, partly because the links between age, horn size, and reproductive success are much weaker than in bighorn sheep.  It is important to consider the possible evolutionary implications of harvest policies, but not all selective harvests will lead to genetic changes. 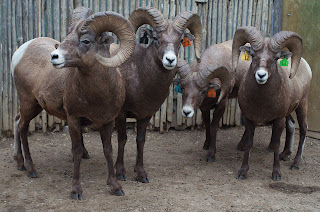 Bighorn sheep rams in the trap at Ram Mountain in 2014.  All these rams fit the legal definition of 4/5-curl.  Photo by Gabriel Pigeon.


The initial narrative opposing our results maintained that selection favoring small-horned rams only occurred at Ram Mountain, a small (20–100 breeding females) isolated population with a 40% harvest rate for legal rams and little possibility of genetic rescue.  To test this narrative, we worked with wildlife managers in Alberta and British Columbia to analyze data on harvested rams.  A clear pattern emerged that ram horns were getting smaller in places where selective harvest was intense: Alberta, central BC, and the Peace region of northern BC for Stone’s sheep, a different species.  No declines were detected in the Rocky Mountains of BC, where a more restrictive definition of ‘legal’ ram decreased the artificial selective pressure and, crucially, allowed some large-horned rams to survive to the age at which large horns increase fitness.  In Northern BC, there was no decline in horn size of Stone’s rams shot in the Skeena region, where harvest pressure is lower than in the Peace.  Horn size of mountain sheep is declining over much of Canada, but only in areas under intense selective harvesting.  That answered the first criticism.

The second criticism was more substantial.  In 2006, Eric Postma pointed out that the statistical technique used by several papers (including ours) to estimate breeding values did not sufficiently account for possible temporal changes in the environment.  He suggested that tests of changes in breeding value should include year of measurement as a random variable, something that we had not done.  Three years later, Jarrod Hadfield and coauthors pointed out additional problems, including possible biases due to genetic drift and other sources of error, and suggested a Bayesian analysis to avoid these biases.  These criticisms were valid, but our paper had included the annual mass of yearling females to account for some environmental variability.  Still, doubts persisted. Our opponents rejoiced, gleefully pointed to these apparently fatal flaws, and argued that management of mountain sheep in Canada was just fine.

The third criticism was rather odd.  A paper in PNAS used the correlation between a ram’s mass at mating and his offsprings’ mass at weaning to measure inheritance.  The paper then developed an Integral Projection Model for an imaginary hunt based on ram mass, and having presented no data on horns, concluded that changes in horn size were entirely ‘demographic’.  Of course, given that the ram–lamb mass correlation was zero, that conclusion was supported by the simulation. The paper was quickly refuted.

The fourth criticism was that the decline in ram horn size in Alberta was caused by a decrease in sport harvest of female sheep.  That criticism was based on the assumption that bighorn sheep are like white-tailed deer and should thus show very strong density-dependence.  It failed to explain why ram horn size did not decline in British Columbia where ram harvests were less intense, despite the absence of any female harvest, or why the largest rams shot in Alberta appear to be coming out of the National Parks, where there is no female harvest.

The fifth criticism was that artificial selection could not occur because emigration of unselected rams from the National Parks ensures a genetic rescue.  That viewpoint is encouraging, because it admits that artificial selection could take place. The evidence undermines the case here: rams shot near the National Parks have larger horns than those shot far from the parks, but over time they also show an increasing age at harvest and decreasing horn size, trends indicative of slower growth rate.

The sixth criticism was that trophy book records suggest that the horns of bighorn rams shot in North America did not become smaller over time.  That is akin to monitoring the average speed of humans by considering only Olympic sprinters. Unfortunately, as we recently showed, a left-truncated sample cannot detect a declining trend, and record books only list horns attaining a minimum ‘score’.  Harvested rams are also a biased sample, as it is illegal to shoot small-horned rams.  Declining trends in the population are thus underestimated by analyses of harvested rams and completely missed by record books.

Most of these criticisms were easily refuted except for #2.  That required the reanalysis presented in our new paper in Evolutionary Applications.  A Bayesian analysis of horn size at Ram Mountain, accounting for statistical criticisms and including the possible effects of genetic drift, confirmed that while subject to intense trophy hunting, rams evolved genetically smaller horns. Because harvest intensity declined tenfold from 1996 and the trophy hunt was stopped in 2011, we also looked at what happened when the artificial selective pressure was removed.  As expected, the decline in breeding value stopped, but was not reversed; because artificial selection was much more intense than natural selection, it will take a long time to reverse the decline in horn breeding values.  Finally, we found that traits genetically correlated with horn length but that are not the direct target of artificial selection (horn base circumference in rams, horn length in ewes) show similar trends, while horn base circumference in ewes, which is not genetically correlated with horn length in rams, does not. 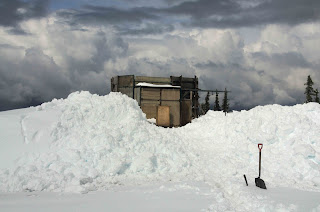 The Ram Mountain trap in May 2013.  We had to shovel snow to see sheep going into the trap!


To sum up.  At Ram Mountain, analyses of horn length combined with a deep pedigree showed that intense selective hunting led to an evolutionary change.  Long-term monitoring of rams shot in Alberta and BC suggests that where selective hunting pressure is high, horn growth has slowed.  There is no evidence of phenotypic rescue from protected areas, despite ram migrations, and there is no evidence that the decline in horn size is due to increasing population density.  We have not yet explored in detail the effects of climate change, but preliminary analyses suggest that it should have a positive effect on horn growth, as reported for ibex in the Alps.  So, what to do? There are two obvious ways to counter the artificial selective pressure: (1) lower harvest intensity, and (2) close the hunt earlier, so that rams that move out of National Parks looking for breeding opportunities can spread unselected genes instead of getting shot.

This is a contentious issue with strong consequences for policy.  Therefore, we were very conservative in our approach, accounting for all serious critiques of the analysis by Coltman et al. in 2003.  We confirm the initial conclusion: killing large-horned rams drives rapid evolution towards smaller horns. Wildlife biologists in Alberta have proposed changes in sheep-hunting regulations to reduce the artificial selective pressure.  Whether that science-based proposal will be politically acceptable remains to be seen.
By Ben Haller - January 25, 2016