A Narcissist Index (n-index) for academics


We all know the h-index, the number of papers by a given author that have been cited at least that many times. For instance, if you have 52 papers cited at least 52 times but the 53rd most-cited paper is only cited 52 (rather than 53 times), your h-index is 52. This index is widely used to assess the performance of academics and has sometimes been praised but much more widely vilified.

While at this week’s American Society of Naturalist’s meeting (Asilomar, CA), I happened to join a conversation that – through a series of unplanned segues – led to the suggestions for a new index by which to assess scientists – the Narcissist Index (n-index).

The conversation started on a totally different topic – how to convince more authors to submit to The American Naturalist. The first question posed to the group was “How many Am Nat papers would you give up to have one Nature or Science paper?” and progressed to questions like “What difference in number of citations for a paper would convince you to publish in Am Nat rather than Science or Nature.” The basic point was to evaluate perceptions about how journal prestige as opposed to actual paper impact (citations) influence how people choose journals.

At this point, the conversation switched to citation rates and what influences them, which led inevitably to the topic of self-citation. For instance, one might inflate their citations simply by citing themselves. Or, even if they don’t do this, it is just generally frowned upon as Narcissistic – or, I suppose, an indication that you are just not widely read.

Although it is typical to criticize self-citation, some have argued that it is merely “an inevitable outcome of a cohesive and sustained research program.” I won’t go into the details here – you can read the paper with this alternative viewpoint – but the whole discussion led someone to say “What we really need to do is figure out what proportion of a person’s citations are self-citations and from this we can calculate a Narcissist Index – the n-index.”

Out came Web of Science (Google Scholar does not track self-citations) and I knew in seconds that I had 829 self-citations out of 8540 total citations for an n-index of 0.1. Hmmm, that sounded high to my friends and colleagues, but we needed some frame of reference. So we started calculating the n-index for everyone in the conversation and for some of our friends (and fathers and mentors), most of whom were at the meeting.

We quickly realized that several factors could influence (or be influenced by) the n-index, including the h-index, total number of papers, “scientific age”, and total number of citations. Back to Web of Science for a bit more data. At this point it became clear that Rowan Barrett was by far the greatest outlier with the lowest proportion of self-citations including in relation to all of these other variables – so he was been deleted from the analyses that follow.

The strongest correlation was with scientific age – longer-established researchers (based on their first paper in Web of Science) have a lower n-index (R2 = 9.2%). Perhaps young people have had less time for their work to become well known – or perhaps self-citation was simply lower in “the good old days” – or maybe the literature is so vast now that it is hard to stand-out and so be cited by others. 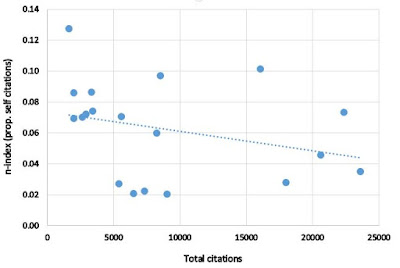 A similar correlation was evident with total citations – the n-index is lower for people with more total citations (R2 = 8.9%). At one level, this association might suggest that self-citation is not a very effective way of increasing your total citations – instead it acts against you. However, it seems much more likely that the association occurs simply because a person can only cite themselves a limited number of times, whereas other people can cite them much more frequently. 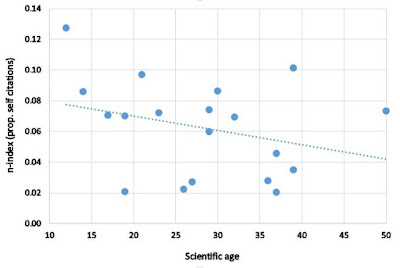 These two variables (total citations and scientific age) are obviously correlated, and this was certainly the case even in our tiny non-random data set (R2 = 61.2%). So, if one really cared about such things, I guess the n-index could be corrected for its various correlates. Indeed, the h-index is often adjusted for scientific age. Interestingly, both the above correlations (n-index on scientific age and n-index on total citations) appear much lower than the correlation between h-index and scientific age (59%) in the same data set, which I guess proves that you really can succeed in narcissism (or research program cohesion) at any age.

Perhaps I am not as good as I thought I was. 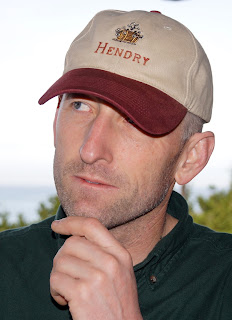 I recently (April 9, 2016) produced a word cloud for my entire forthcoming book Eco-Evolutionary Dynamics. The most common words were "et" and "al", which I guess is not surprising. 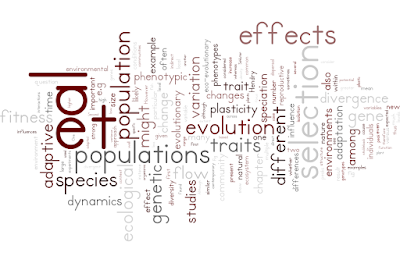 Removing those uninteresting words, I generated the word cloud below. 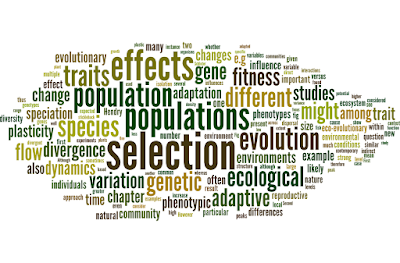 I put it out on twitter and Menno Schilthuizen immediately noted the "relative modest" appearance of the word "Hendry." I hadn't even noticed my name in the cloud but, looking more closely, I realized that it is the only obvious name in the entire thing, which suggests a new index of narcissism: the appearance of your own name in a word cloud of your work. 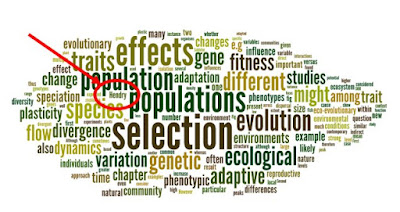