Are laboratory studies useful for understanding the “real world"?

“It is interesting to contemplate a tangled bank, clothed with many plants of many kinds, with birds singing on the bushes, with various insects flitting about, and with worms crawling through the damp earth, and to reflect that these elaborately constructed forms, so different from each other, and dependent upon each other in so complex a manner, have all been produced by laws acting around us.” (Darwin 1859)

I just returned from an “eco-evolutionary interactions” workshop at Yale organized by David Post, David Vasseur, and Paul Turner. In his opening introduction to the symposium, Paul referred to research from the “real world” when speaking about something of applied relevance to humans. He then hesitated for a second and took a tangent to complain about the term “real world” as all of the work was in the “real world.” (The Turner World?) A bit later I was talking with Alvaro Sanchez about the value of lab experiments for eco-evolutionary studies – a different sort of “real world” concern. Alvaro was asking my opinion partly because he had seen an advance copy of my book in which I state:

Eco-evolutionary studies with real organisms could proceed in the laboratory or in nature. Advantages of the laboratory are manifold: populations can be genetically manipulated, environments can be carefully controlled, replicates and controls can be numerous, and small organisms with very short generation times (e.g., microbes) allow the long-term tracking of dynamics (Bell 2008, Kassen 2014). These properties dictate that eco-evolutionary studies in the laboratory are elegant and informative, yet only in a limited sense. That is, such studies tell us what happens when we impose a particular artificial environment on a particular artificial population and, hence, they cannot tell us what will actually happen for real populations in nature. Understanding eco-evolutionary dynamics as they play out in the natural world instead requires the study of natural populations in natural environments. I will therefore focus to the extent possible on natural contexts, although I certainly refer to laboratory studies when necessary.

This exchange reminded me of a debate Andy Gonzalez and I had undertaken for the amusement of our department, and it seemed an appropriate time to revisit my side of that debate in this blog. Specifically, I would like to ask “What – if anything – can laboratory studies tell us about real world?” 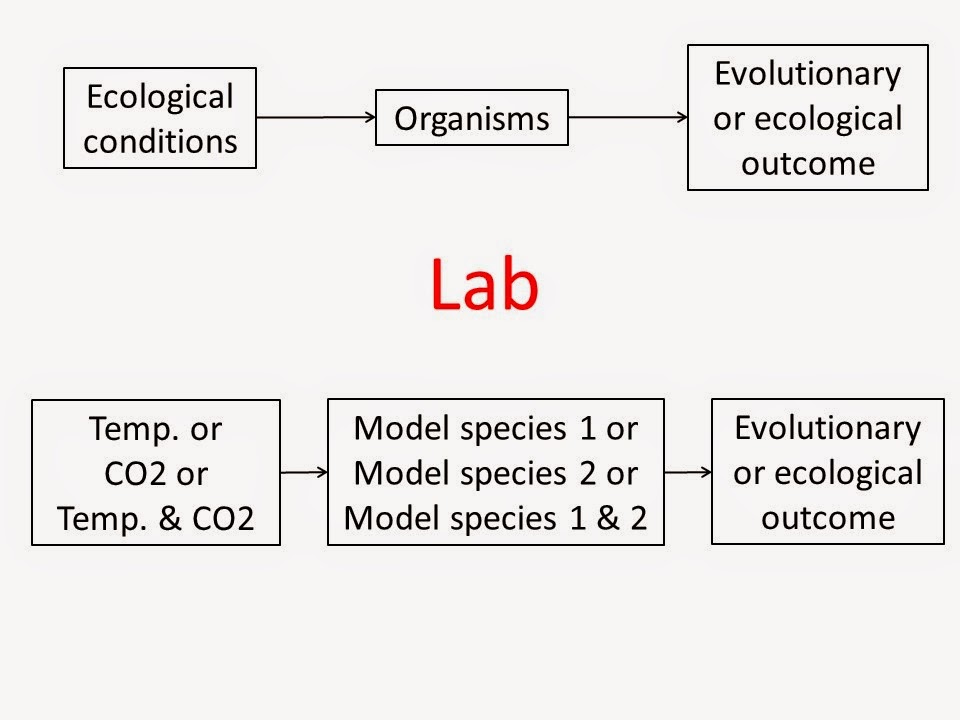 What we seek to understand in any eco-evolutionary work is the chain of effects shown below: the effect of ecological conditions on organisms and the evolutionary/ecological outcome. The way laboratory studies typically address this question is to create variation in some focal ecological condition, such as temperature or carbon dioxide (or both), expose some model organisms (often only just one or a few identical clones) to those different conditions, and then measure the evolutionary/ecological outcome. The real world is much more complicated, of course; populations or species of interest might be exposed to differences in a great diversity of biotic and abiotic factors and might have large amounts of genetic and non-genetic variation in a wide array of relevant traits. These differences lead to two main limitations of laboratory studies. 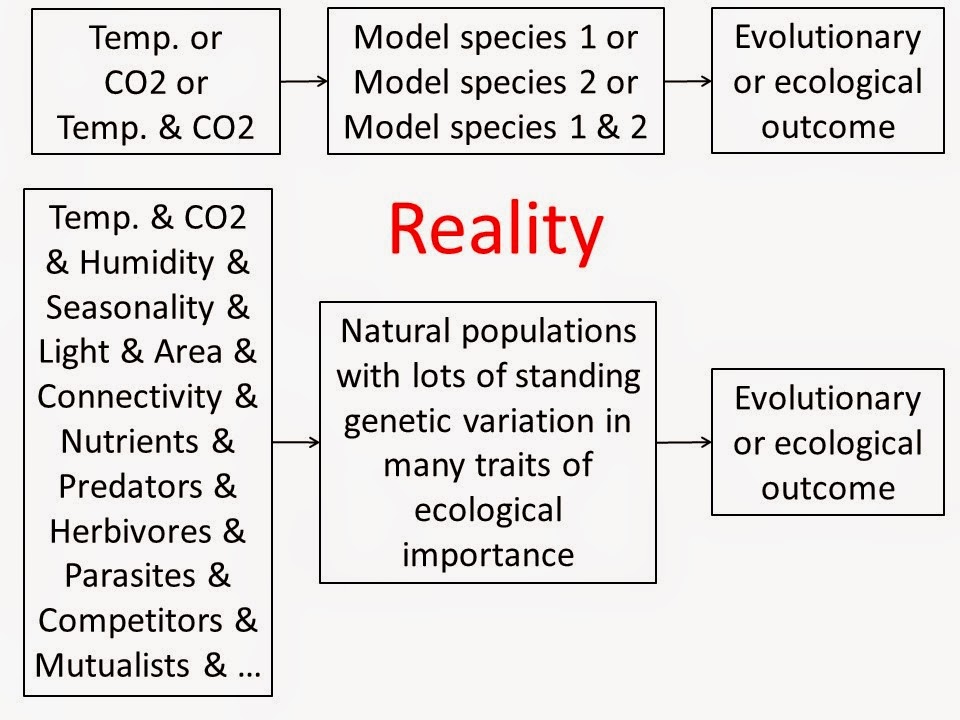 1. By ignoring variation in other natural factors, laboratory studies cleverly isolate particular effects, but those effects are likely to be very different in nature.

These differences can arise in at least three ways. First, correlations can exist between explanatory variables that fundamentally shape the effect of each. Second, indirect effects cascading through other organisms or environmental conditions can amplify or offset the direct effects usually measured in laboratory studies. Third, unmeasured contributors or random noise can swamp causal effects. Interestingly, these complications are all cited as supporting the great strength of laboratory studies: by getting rid of these correlations and effects, one can get rid of the noise and get closer to the true mechanism. Sure, this is all well and good – but such studies don’t then tell you anything about the importance and nature of the actual effects IN NATURE (which is what we really care about). Instead such experiments only provide proof of concept. 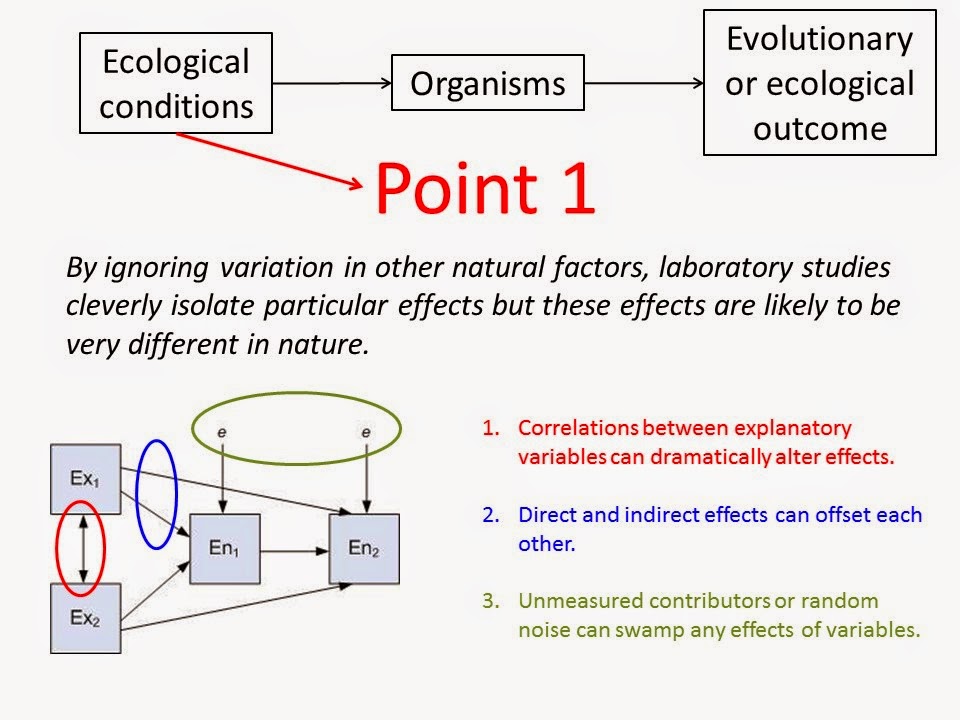 2. The use of model (as opposed to natural) populations is sure to yield a misleading expectation.

Evolutionary responses of a given suite of traits will be a function of selection acting directly on the genetic variation for each trait and selection (and constraints) acting indirectly through genetic covariation with other traits. Unfortunately, genetic (co)variances in nature never equal those in nature, meaning that the observed evolutionary response will not match the response that would emerge in nature. Moreover, many laboratory studies use only a single clone of organisms so that they can assess the effects of new mutations. Wonderful – but most immediate responses to environmental change in nature will be driven by standing genetic variation, which that approach eliminates. 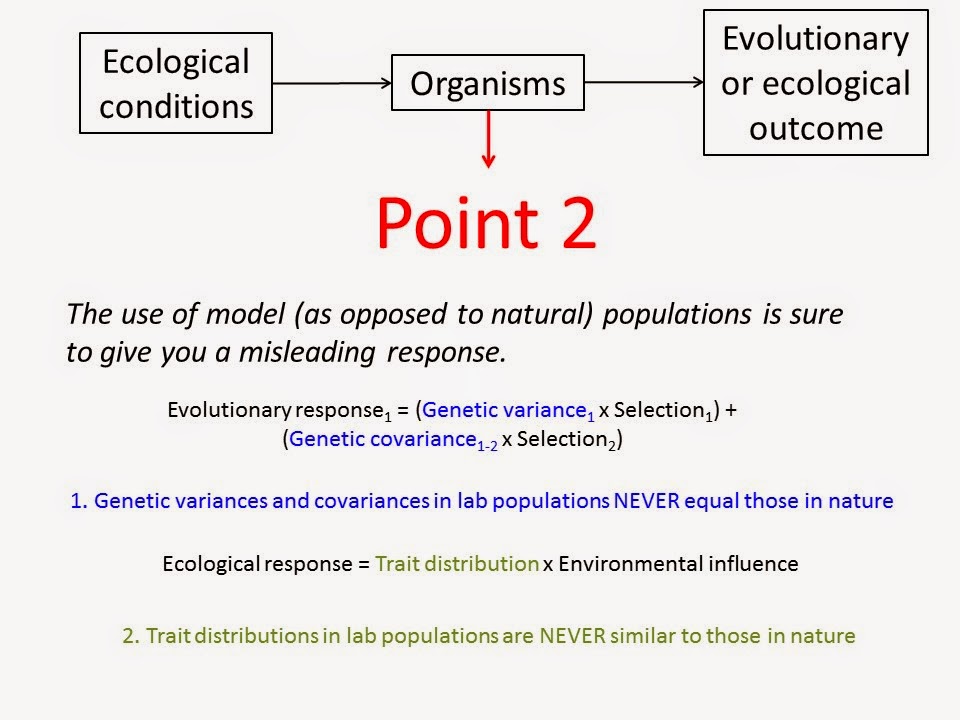 Having just argued from first principles that laboratory studies will not be predictive of evolutionary or ecological effects in nature, I will provide a few examples by way of illustration.

Amphibians are a classic system for studying the effects of competition. Skelly and Kiesecker (2001 – Oikos) performed a meta-analysis of how the experimental “venue” (lab, mesocosm, field) influenced estimates of how competition influences amphibian growth. Based on 227 comparisons from 52 studies, the authors showed that the effects of intra-specific competition (white bars) were reasonably consistent across venues but the effects of inter-specific competition (black bars) were dramatically different between venues. Results from the laboratory from mesocosms and from experiments in natural populations all yielded very different results. 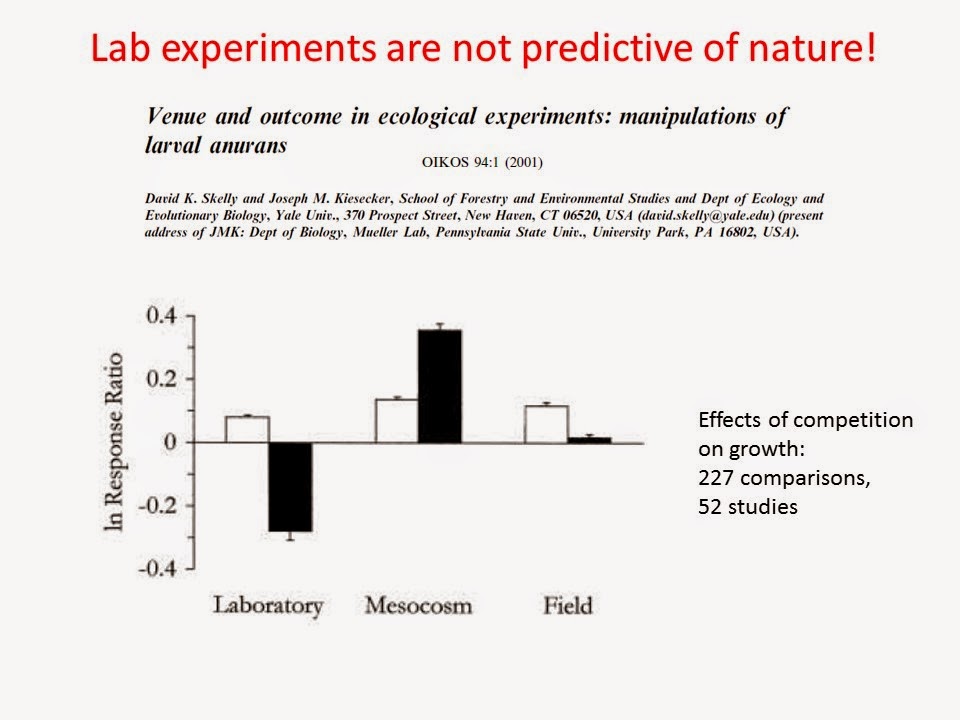 Many laboratory studies have shown that exposure to novel parasites causes the evolution of resistance to those parasites. Similarly, releasing populations from parasite pressures leads to the evolution of reduced resistance, presumably because resistance is costly. We tested the latter expectation in nature through assays of resistance to a common parasite (Gyrodactylus) in guppies from a highly parasitized population that was introduced into four replicate environments that lacked the parasite. We found – completely contrary to lab experiments – that all four of the introduced populations rapidly evolved INCREASED resistance to the parasite they no longer experienced. Presumably this result arose because other factors in nature caused selection on other traits that were pleiotropically coupled to resistance. The lead author (Felipe Dargent) wrote about this work in a previous post and the work has since been the subject of a comment-response that specifically contrasted the complexity of nature as a weakness or strength of experiments in nature.


So – in the end – the study of a given eco-evolutionary effect would ideally couple laboratory and field (and theoretical) studies. Reassuringly, this was a major theme of the working group – designing questions and experiments that can be explored simultaneously in theory, in the lab, and in nature. I look forward to seeing what emerges.