Why stop there? Probing species range limits with transplant experiments

Understanding why species occur where they do is a fundamental goal of ecology.  Predicting where they might occur in the future is also an increasingly important goal in conservation, as invasive species spread and native species respond to climate change.  One approach to explore both issues is to study the edges of species distributions and the processes that currently limit them.

Do species stop occurring where things suck too much?
A satisfyingly simple explanation for range limits is that each species has an optimal set of conditions under which it thrives.  As it moves away from that optimum, individual fitness declines and populations dwindle.  At some point populations are unable to sustain themselves (we call this break-even point the niche limit) and the species disappears from the landscape.


The best way to test why a species doesn’t occur somewhere is to move it there and see what happens (provided one is not dealing with humans). Transplant experiments comparing fitness within and beyond the range can test for predicted fitness declines.  Assuming experiments are adequately replicated in time and space, transplant success at the range edge but failure beyond suggests the range limit coincides with the species’ niche limit.

Adequate replication is no small feat, however, and makes good transplants labours of love (often minus the love by the end).  Since strong experiments will only ever be conducted on a small subset of species, those of us studying range limits must eventually ask ourselves, “is there any hope of predicting across species, or is it all just ‘stamp-collecting’?”.

Meta-analysis
To address this slightly uncomfortable question, we tested for patterns among transplants of species or subspecies across their latitudinal, longitudinal, or elevational range (111 tests from 42 studies). 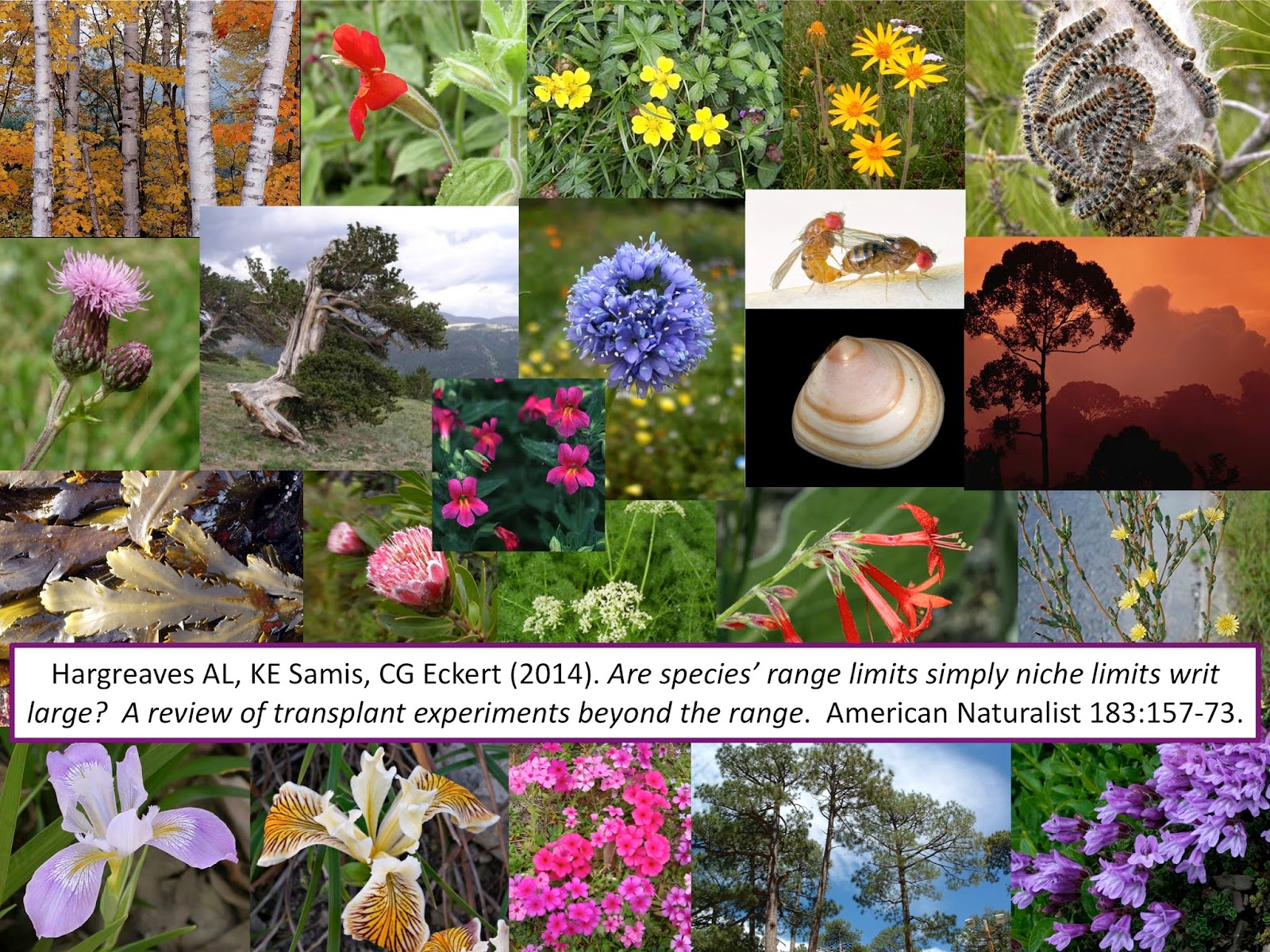 A smattering of the 93 taxa transplanted beyond their range.  Most studies used plants, which obligingly stay where you transplant them.


We tested how often range limits involve niche constraints by testing how often performance declined from the range edge (ideally) or interior (if there were no edge transplants) to beyond.  To compare among studies that measured everything from lifetime fitness to clam respiration, we calculated the relative change in a given performance parameter:

What did we find?


Fitness declined beyond species’ ranges in
75% of 111 tests

and the average decline was significant.  The percentage was even higher when studies measured lifetime fitness (83% of 23 tests).  This strongly supports the importance of declining performance (niche constraints) in limiting species distributions.

Fig. 1. Hypothetical results comparing transplants at the range interior, limit, and beyond. Fitness declines beyond the range in all cases, but only the middle scenario suggests range and niche limits coincide.  Numbers give % of 26 meta-analysis tests that fit each RL vs. NL  pattern. Click to view at full size.


Discrepancies are generally explained by dispersal
If species fail to occupy suitable habitat beyond the range, they are dispersal limited.  If edge populations occupy unsuitable habitat (a phenomenon for which range limits have been nicknamed “the land of the living dead”; Channell 2000, Nature) they must be maintained by dispersal from the range interior to persist (Fig. 2). 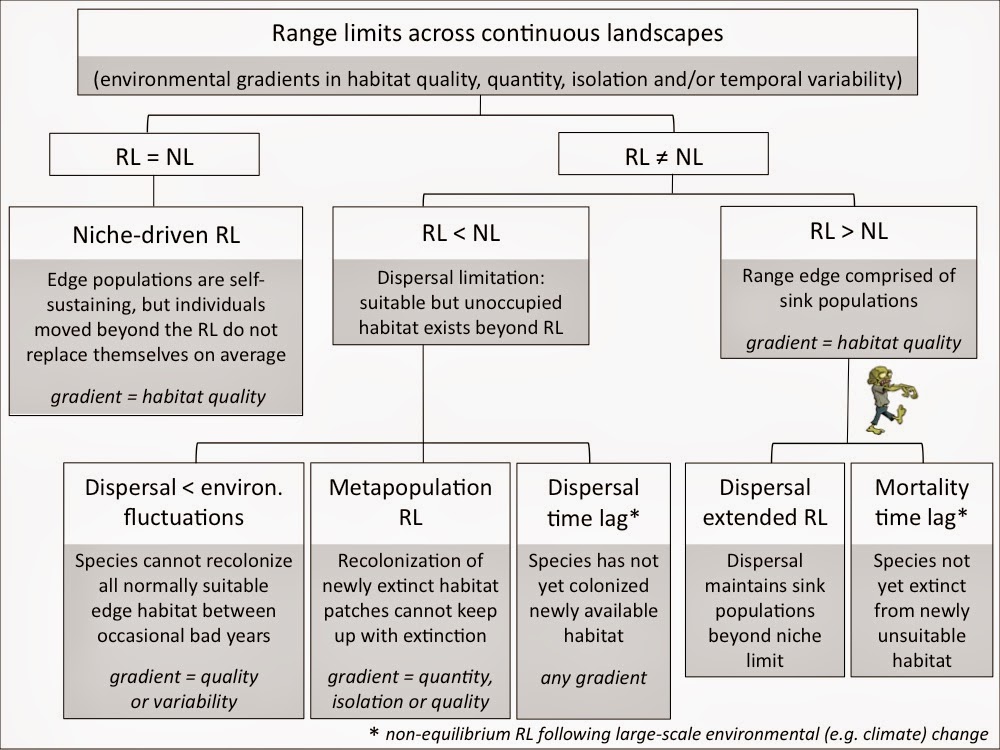 
So, while most range limits involve niche constraints, dispersal decouples many from the species’ niche limit.  Interestingly,

This makes sense given the much longer dispersal distances needed to traverse a geographic gradient than an equivalent elevational one.

Which niche constraints matter?
Amid growing concern over modern climate change, a lot of effort is spent predicting how species distributions will respond, with most models assuming range limits are imposed by climate. 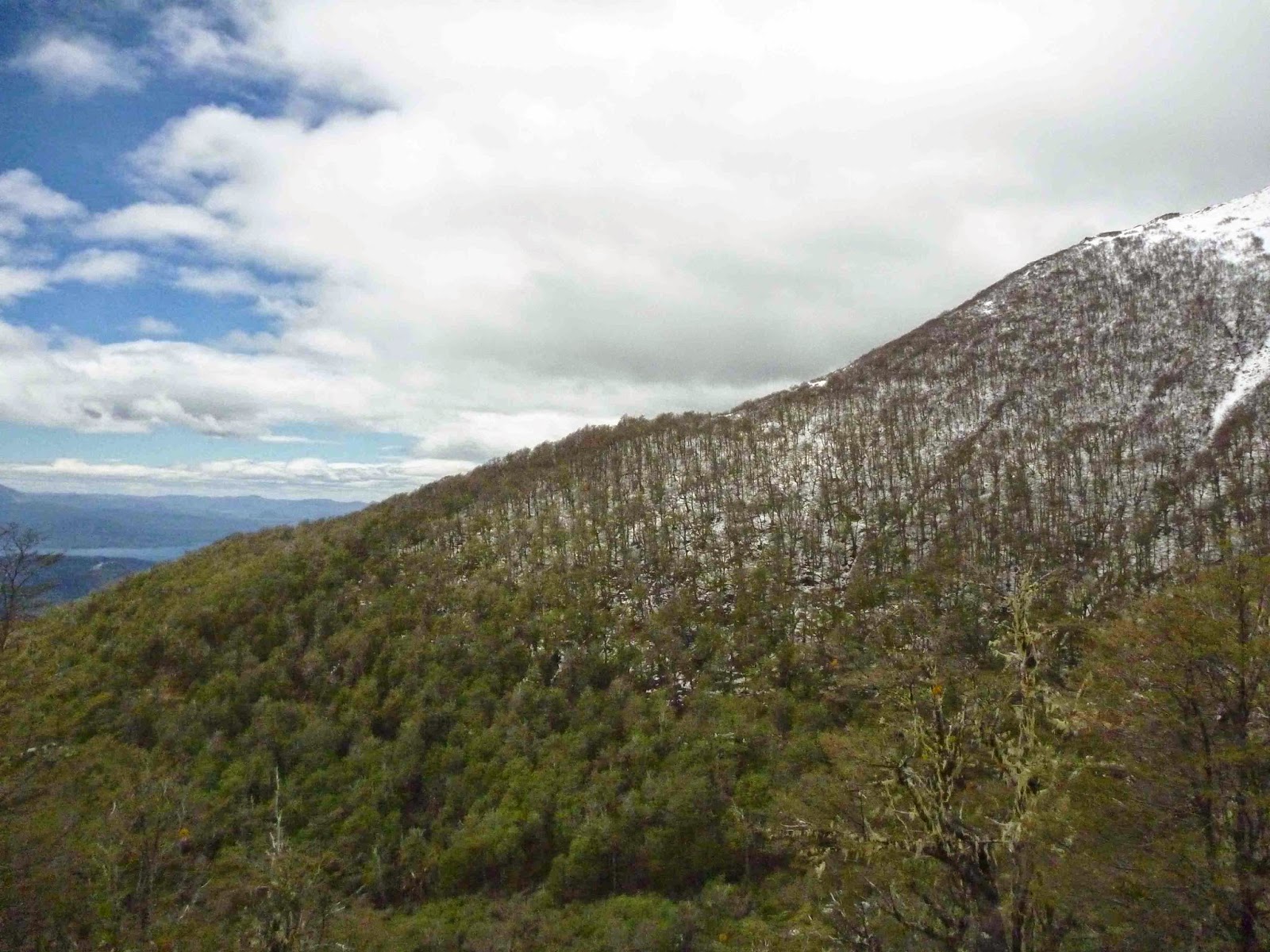 Beech trees in Patagonia, Argentina don’t like cold winters either.


While climate is undoubtedly important, there are many examples of ranges limited by other factors, including interactions among species.  As species interactions are messy to include in range shift projections, it would be useful to know how important they are, and when. 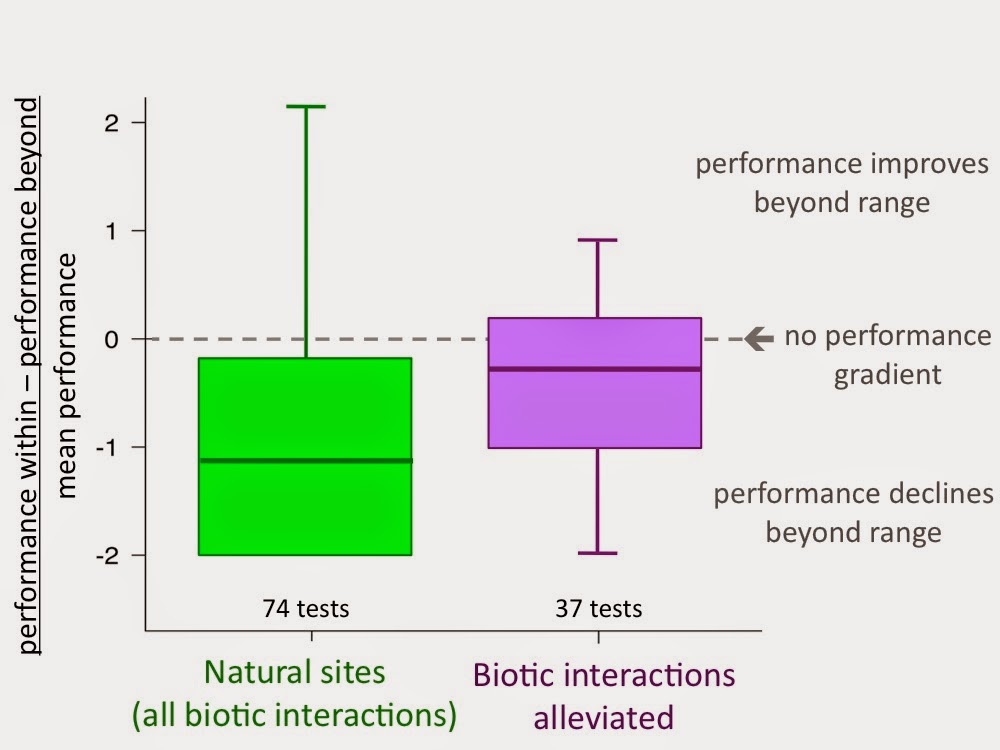 
We also tested an old hypothesis that biotic interactions are especially important at a species’ low-elevation and low-latitude range limits (click to view at full size):

We compared the drivers of high vs. low elevation limits and high vs. low latitude limits.  As predicted, most high-elevation range limits were imposed by purely abiotic factors (e.g. climate), whereas


(Fig. 4).  The same pattern exists for equatorial vs. polar limits, but there were too few studies to test it statistically.

Figure 4. Interactions among species are more important in imposing low-elevation (and low-latitude) range limits. Analyses included only transplants into natural environments that provided enough data to assess the causes of the range limit studied. Click to view at full size.


Not just stamp collecting
Our meta-analysis of transplant experiments revealed broad geographic patterns in the relative importance of niche constraints and dispersal, and in biotic vs. abiotic constraints (it also revealed that really good experiments are rare and sorely needed, if you’re tempted).

Implications for predicting climate-driven range shifts
First, we might expect faster relative shifts of high-elevation vs. polar range limits.  Dispersal is better at keeping range and niche limits in equilibrium across elevation gradients, and sink populations common at elevational range limits may provide a head start.  At the other end, ranges limited primarily by other species will respond less predictably to climate change, so we should not be surprised to see a mess of contrasting responses at lower limits.