Humans have a penchant for making “best of” (Top 10, Top 5, anything from Buzzfeed, ...) lists. David Letterman’s Top 10 lists are, of course, a long-standing classic. Many magazines and websites have Best Of lists for the year: best photos, best movies, etc. And now we have “best of” YouTube collections for pretty much anything that might interest you. It seems to be human nature to make such lists – although the characters in the movie High Fidelity argue it is a tendency more common or more enhanced in men than women.

The ultimate best-of lists are Bucket Lists – the things you need to see/do before you die. Presumably these are the 100 (or whatever number of) things that would enrich your life experience more than any other. The things that – if you didn’t do them – would have you looking back from the grave and thinking “Damn, I never went cave diving” or “Why didn’t I ever see a Broadway Play?” or whatever. Sometimes we see global bucket lists presumably applicable to all humanity (or perhaps the “average” human), but other times we see more targeted Bucket Lists for things such as Sporting Events, Fishing, Skiing, Reading, Dining, Sex, and so on. This got me to thinking: what would be an Evolution Bucket List? A Google search suggests no such list exists and so I figure we should develop one.

I will start the ball rolling with some initial ideas. I hope folks will suggest additional options in the comments. Perhaps with a few versions of the list batted around, we can develop the optimal set. What should be on such a list? Several categories stand out. (1) Locations where organisms are particularly special, such as Galápagos. (2) Particular organisms of evolutionary significance or novelty, such as the platypus. (3) Locations of historical/contemporary importance to the study of evolution, such as Darwin’s home. (4) Amazing interactions between organisms, such honey guides and honey badgers or the parasitic isopod that replaces the tongue of some marine fish. (5) Specific dramatic or important fossils or fossil sites, such as the Burgess Shale. So I will start our group effort by suggesting some items for the Evolution Bucket List: some I have already experienced, some I expect to experience, and some that would be great to experience but that I probably never will.

Things already in my bucket

1. Galápagos Islands. For me, Galápagos is the single most iconic and inspirational location for someone interested in evolution. Not only did it inspire Darwin and many evolutionary biologists since, but it is home to some of the world’s most unique and interesting organisms: marine iguanas, Darwin’s finches, flightless cormorants, tropical penguins, and many others. Of course, we could easily list each of these organisms as separate items on the bucket list but – given that one can knock all of them off in a relatively short time in a relatively small area – I think they are better encompassed as a location. I have been fortunate enough to visit Galápagos many times, although I still haven’t seen a flightless cormorant. BLOG POST

2. Down, England. No location was more instrumental in the development and exposition of Darwin’s theory. It was here that Darwin did nearly all of the work that led us to our modern understanding of life on earth and how it came to be. The most obvious thing to see is Down House (especially his study) and its grounds (especially the Sandwalk). However, what was even more exciting for me was Darwin’s Pub. BLOG POST

3. Archaeopteryx. Discovered soon after Darwin published his magnum opus, Archaeopteryx made flesh the intermediate forms between extant groups (birds and reptiles) and was thus a crucial contributor to acceptance of Darwin’s theory. Simply put, Archaeopteryx is the most famous fossil in the world: it is even in MS Word’s spell-check dictionary which, I have just discovered, knows how to spell it better than me. It is also the world’s most beautiful fossil – and spectacular versions can be seen in many museums. I have seen them in the Berlin Natural History Museum and the British Natural History Museum.

4. Oilbirds. One of the most exciting things for an evolutionary biologist is evolutionary novelties – species that just stick out in ways that set them apart from even the most closely related species. That is, they are the sorts of species that might not be imaginable if they didn’t actually exist. Oilbirds are my current favorite. They nest in caves and feed on fruit at night, and they echolocate! They are also huge outliers on the evolutionary tree of birds. And they live in spectacular settings in tropical forests. I have seen them in Trinidad both in caves and clicking their way along river corridors at night. BLOG POST

5. Carnivorous plants. I was sorely tempted to list another cool animal (mudskippers or leafcutter ants) but I suppose plants might also be important and interesting – at least to some. Being an animal guy, the plants that are most fascinating to me are the ones that seem almost like animals – the predatory plants. Most iconically, this category (actually several independent evolutionary lineages) jncludes pitcher plants, sundews, and Venus flytraps. It is one of life’s guilty pleasure, at least for kids, to catch and “feed” insects to these plants. And, of course, it helps that Darwin was a big fan, even writing a book about them. Indeed, various carnivorous plants are featured to this day in the greenhouse at Down House (PHOTO).


Things reasonably likely to end up in my bucket

6. Madagascar. Another evolutionary marvel. A place, like Galapagos or New Zealand, long cut off from the rest of the world and so able to embark on an independent evolutionary trajectory. In the case of Madagascar, what I would most like to see are lots of lemurs: ring-tailed lemurs, mouse lemurs, and – most importantly – aye-ayes. Surely the aye-aye is one of the most bizarre and amazing mammals in existence – my kids think so anyway. Check out this awesome video True Facts about the Aye-Aye (3.5 million views and counting).

7. Burgess Shale. One of the most important fossil finds was in the Canadian Rockies where, 500 million years ago, a large mudslide covered an almost intact fauna from the Cambrian Explosion, a period during which animal life exploded in diversity. This site has told us most of what we know about this time, half a billion years age. In fact, I am shocked that I have not already been to the Burgess Shale, given that I grew up only a few hours away (What the hell were my parents thinking not taking me there?) and I still drive through the area all the time. You can even get a guided tour. What could be simpler? Surely, I will soon check it off.

8. Chimpanzees – in the wild. Our closest relative, and popularly consider 95+% genetically similar to us – to me! I am captivated watching them in any of the countless BBC videos. It is like a window into the past, in the sense that our common ancestor probably looked a lot more like a chimp than a human. I am pretty confident I will soon knock this one off too, given that I have collaborators working in Kibale National Park, Uganda, where chimpanzees are abundant and easily seen. Yet another reason to do some work there.

9. Platypus – in the wild. OK, I suppose some other monotreme, like the echidna, would do in a pinch but the platypus just seems so much more bizarre. In fact, it bedeviled scientists for almost a century, as playfully described in the book titled, wait for it… Platypus. Of course, I envision my encounter will be like the one in David Attenborough’s Life of Mammals – me sitting peacefully on the edge of a pool while a platypus swims playfully (or at least indifferently) about my feet in crystal-clear water. I have already been to Australia but didn’t seek out a platypus at the time, dammit. Yet I will surely be back to Australia soon. In the meantime, I will have to be satisfied with the dusty old male platypus moldering away in the basement of the Redpath Museum. Not quite the same, but inspirational nonetheless.

10. Flying herps. They don’t really fly, of course: flying has evolved only four times (bats, birds, insects, pterosaurs), but these gliders can be just as amazing. I grew up watching flying squirrels, which were cool enough, but what about flying snakes (VIDEO), flying lizards (VIDEO), or flying frogs (VIDEO)? The snakes can dramatically change direction in mid-air. The lizards extend their ribs until they look like a kite. The frogs were described by Alfred Russell Wallace – the co-discover of natural selection.

Things with varying degrees of unlikeness.

11. Bolas spider in action. Looks like a bird turd. Gives off a moth pheromone. Spins a ball of sticky web on a string and swings it around to catch sexed-up moths in flight (VIDEO). This sight should be the most accessible of these relatively inaccessible bucket list options, given that bolas spiders are widespread, seemingly even near my house. I just don’t know where or how to start looking. (OK. so maybe this one actually is achievable and I should have picked some rarer but equally cool spider.)

13. Killer whales swimming onto the beach to get at sea lions. I must have watched videos of this behavior hundreds of times – truly amazing stuff. Here is one of those VIDEOS – 12 million views. In reality, this spectacle should be reasonably accessible (at least in relation to those that follow) but I am betting the chances are still remote because it happens in only a few places (Península Valdés, Argentina) for only part of the year (Feb–Apr – and episodically even then) and access seems to be strictly controlled. 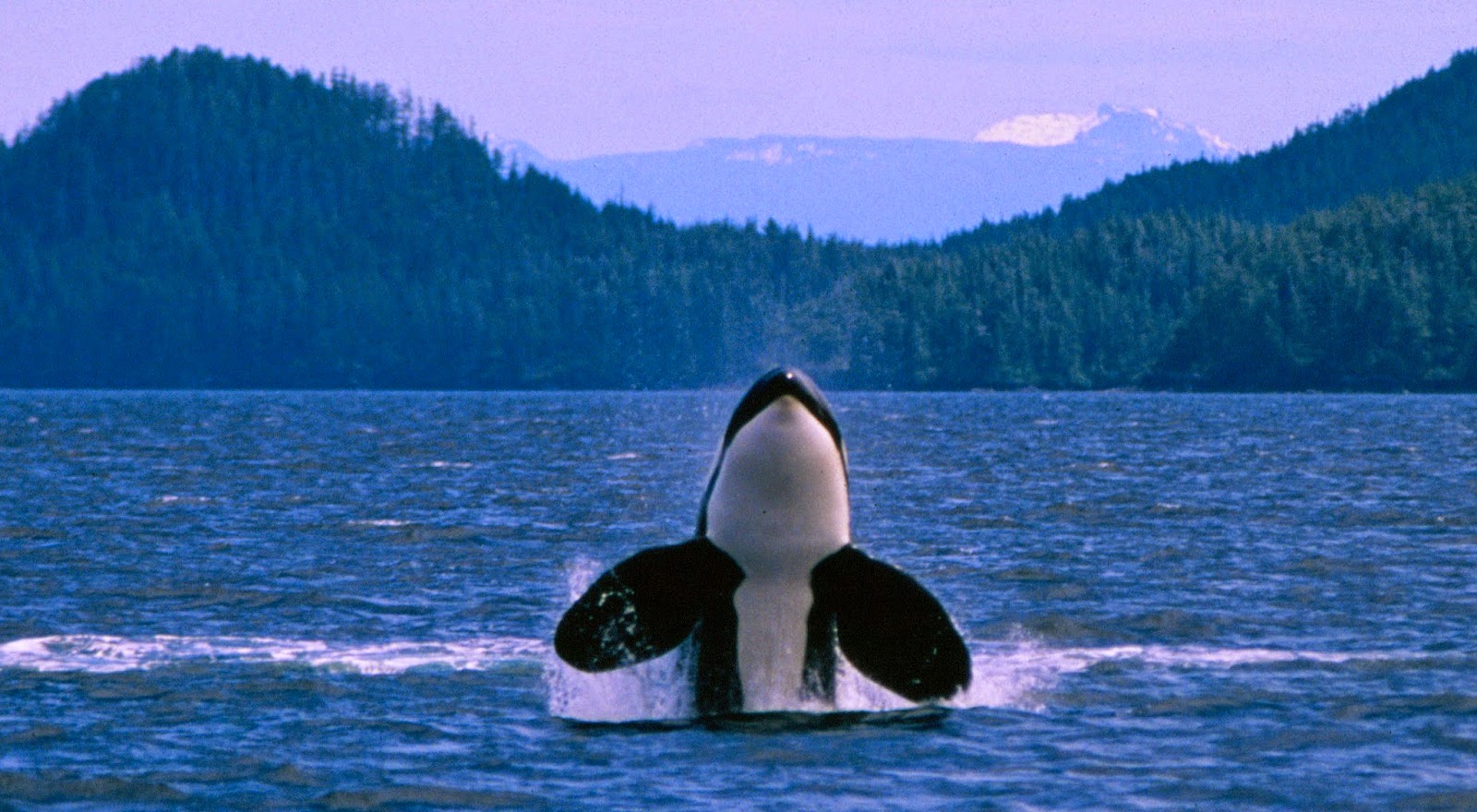 14. Hydrothermal vent communities. Entire communities that thrive independently of energy from the sun. First seen in 1979, these communities of tube worms, crabs, fish, and other critters were too bizarre and unpredicted to be believed – except that we could actually see them on VIDEO. For this I just need a submarine.

15. Tylacine. If one is to see a cool marsupial, one couldn’t do better than a Thylacine – the Tasmanian Tiger, in colloquial terms. OK, I know you’re saying well, duh, it’s extinct. But not everyone is convinced, and a few of these critters might still be hanging out in the woods of Tasmania. To give a hint of what you might see, check out this chilling VIDEO of the last one alive in a zoo – viewed more than 2 million times. For this I might just need a time machine.


So, there’s my first attempt at an alpha version of an Evolution Bucket List. Please send me some new ideas so we can make a definitive list. If you have actually knocked off the item, then a tiny description like those above would be great – with a video or picture, ideally one you took yourself.