Shortly after joining Patrik Nosil’s newly formed lab at the University of Colorado, making it a busy research group of two, I was coming to grips with the reality that I needed to gear up for a serious transition from pure community ecology to hard-core evolutionary genomics. This all turned around on a dime, however, after Andrew Hendry’s epic visit to Boulder during the winter of 2009. Details are fuzzy, though I vaguely recall a near-boiling hot tub, and too few beds at the end of a long night. Anyway, despite scalded feet, Andrew’s visit ended with a changed direction for my PhD and a new line of research for the Nosil Lab: eco-evolutionary dynamics!

Independent of my reorientation towards the community ecology of eco-evolutionary dynamics, we were contacted by Ilkka Hanski who, knowing Patrik’s work, was keen to use the stick insect Timema cristinae to evaluate one of his recently developed mathematical models, which makes fine-scale predictions about spatial patterns of local adaptation (Hanski et al. 2011). Timema cristinae experiences strong divergent selection from birds for crypsis on its two dominant host-plant species, Adenostoma fasiculatum and Ceanothus spinosus, causing the evolution of striped and unstriped morphs, each better camouflaged on Adenostoma and Ceanothus, respectively (see figure below, Nosil and Crespi 2006). However, the homogenizing effects of gene flow create complex spatial patterns of local adaptation throughout the landscape (Bolnick and Nosil 2007), setting up an excellent scenario to test Ilkka et al's model. It seemed as though Ilkka’s proposed research would dovetail nicely with the ecological work we were planning to do in Timema come spring, so we began a collaboration with him and his postdoc Tommi Mononen. This collaboration culminated last month with a nice publication in Current Biology (Farkas et al. 2013). 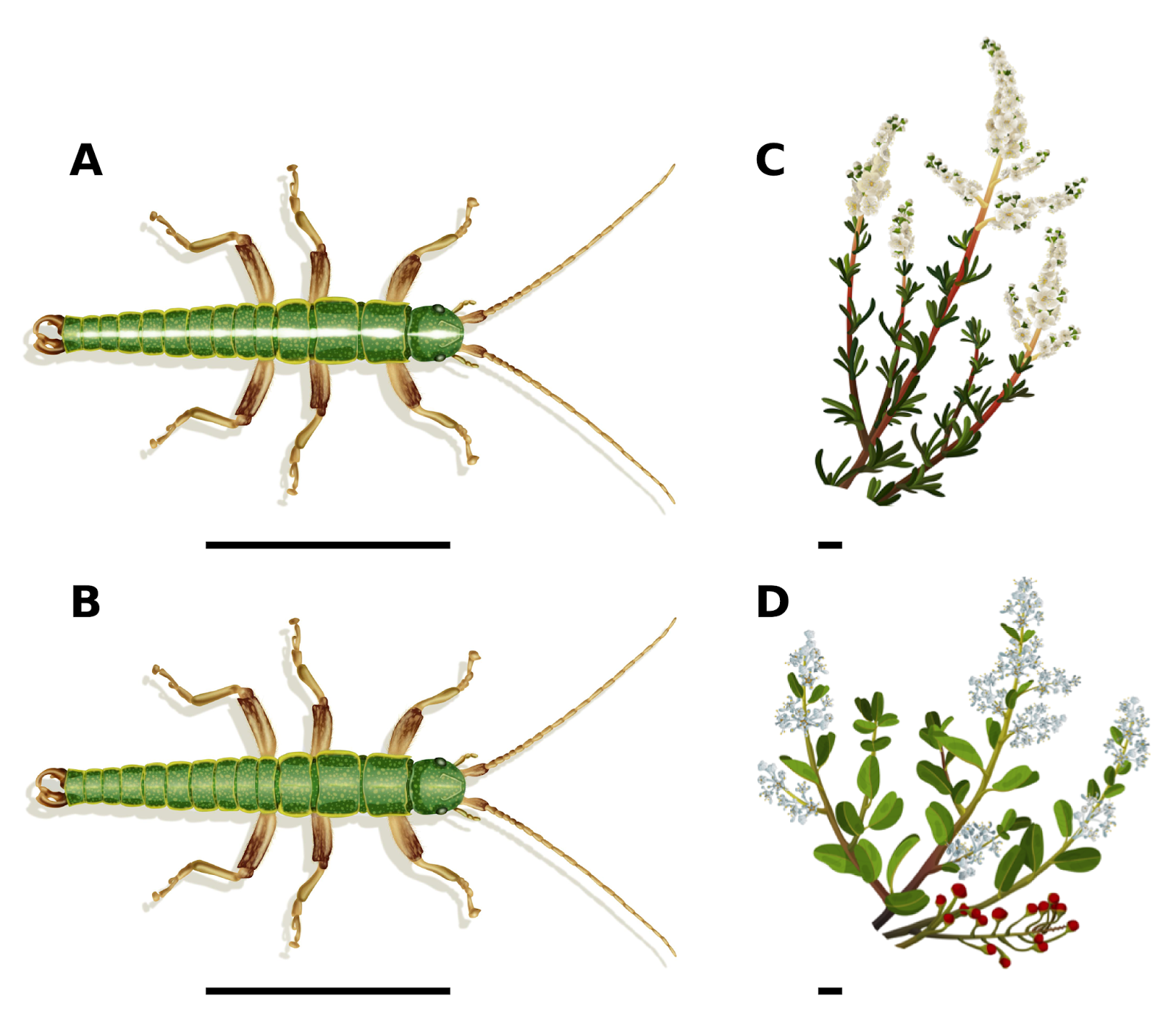 Rewind to the spring of 2011, when Tommi, Patrik, my labmate Aaron Comeault, and I shared a one-bedroom apartment in Santa Barbara, in which Patrik insisted on sleeping directly in front of the only bathroom, apparently to prevent mid-night toilet visits by the rest of us. Led by Tommi, we trekked into the Santa Ynez National Forest and began to collect data. Using steel fence stakes, flagging tape, string, and a tape measure, we manually mapped (old-school) 186 host-plant patches of Adenostoma and Ceanothus inhabited by Timema, and sampled the bushes by whacking their branches with a stick, recording the abundance of the two morphs on each bush. We also performed two field experiments, one of them in 2012, manipulating the number of striped vs. unstriped Timema on bushes of Adenostoma. After the fieldwork was done, behind the scenes in Helsinki, Tommi and Ilkka scripted away the wee hours of every morning, evaluating their model with our data, and generating new predictions for us to test.

From these studies, we found a very strong influence of evolutionary dynamics in T. cristinae on ecological patterns, both for T. cristinae populations themselves, entire cohabitating arthropod communities, and interactions between herbivores and their host plants. In the mapped metapopulation network of T. cristinae, we found significantly lower local abundances in host-plant patches harbouring populations with high proportions of the poorly camouflaged morph (unstriped on Adenostoma and striped on Ceanothus). Also, as it turns out, the mathematical model performed quite well to predict the spatial patterns of local adaptation in Timema, and made some interesting predictions about patterns of patch occupancy and modified evolutionary trajectories for the Timema. These results were corroborated by our manipulative experiments, which showed lower abundances on Adenostoma bushes stocked with the unstriped morph. Furthermore, we found lower abundance and species richness of cohabitating arthropods on those bushes, as well as lower rates of herbivory from sap-feeders. These community-level results suggested that when birds are attracted to and forage on populations of poorly camouflaged Timema, they opportunistically eat or scare away other arthropods as well, reducing herbivory. Our second experiment involved a bird-exclusion treatment, and supported this hypothesis. 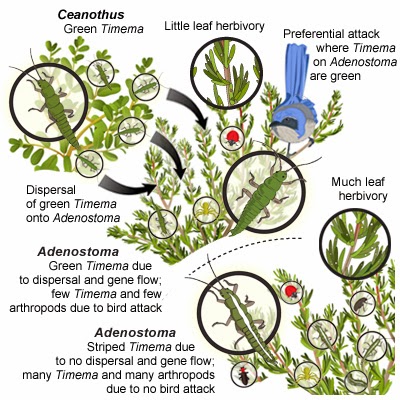 Graphical summary of the empirical results.

The various authors of our paper differ a bit in their opinions about what is most interesting about the study, but I will point to three main things. Firstly, eco-evolutionary research, and much ecological research in general I venture to claim, tends to use single types of evidence. I think one of the major strengths of our study is that it combines manipulative experiments with field observations and mathematical modelling: our experiments strongly support the notion that camouflage evolution in T. cristinae causes differences in ecological dynamics, and our observational data show that it correlates with naturally observable patterns. Second, evolutionary ecologists have little sense for how important evolution may be in driving ecological patterns relative to traditionally examined factors. In our observational study, we show that poor camouflage accounts for approximately 7% of variation in population size, comparable in magnitude to the effects of host-plant species (5%) and habitat patch size (14%). For T. cristinae populations, evolution is in this sense “important”. Lastly, our study is among few to empirically examine the ecological effects of evolutionary processes other than natural selection, since we also look at gene flow and founder effects. The consequence is that we have evidence in our system for ongoing effects of rapid evolutionary processes on ecology: year after year, natural selection rapidly increases local adaptation, and gene flow breaks it down, allowing eco-evolutionary effects to persist through time.

To bring it all full circle, Andrew was asked to write a news dispatch by Current Biology (Hendry 2013) to highlight the work he set in motion over three years ago. Thanks for everything Andrew!