Back to the future IV: Michael J. Fox encounters the Red Queen

Today is October 21th 2013. This is exactly two years from October 21th 2015! If that does not ring a bell, you better continue reading...
The movie “Back to the future” tells the story of Marty McFly (played by Michael J. Fox), a teenager living in 1985 who is accidentally sent back in time to 1955. He meets his future parents in high school and accidentally attracts his mother's romantic interest. Marty must repair the damage to history by causing his parents-to-be to fall in love, and with the help of scientist Dr. Emmett "Doc" Brown, he must find a way to return to 1985.
Thanks Wikipedia. But you can tell, interesting script. The movie was a success and the producers decided to also make Back to the future II and III, making Marty running back and forth the time dimension between 1885 and 1955 and 1985 and 2015 to prevent incidents in the past or solve problems in the future.
Unfortunately, moviemakers know little about evolutionary biology and host-parasite interactions. Indeed, Michael J. Fox is travelling through time without any assessment of disease risk. What would have happened if he had a 1985 Penicillin-resistant nasty cold and contaminated his father in 1955? He might have destroyed his father and his own present. And even worse, what if he brought back the Black Death or the poxs from 1885? Would we be able to control public health and prevent a new pandemic? According to the Back to the future script, the past Michael J. Fox is taking the DeLorean time machine again to arrive in October 21th 2015... This is EXACTLY two years from now, so we better start worrying! If you need assistance with the countdown, check http://www.october212015.com. 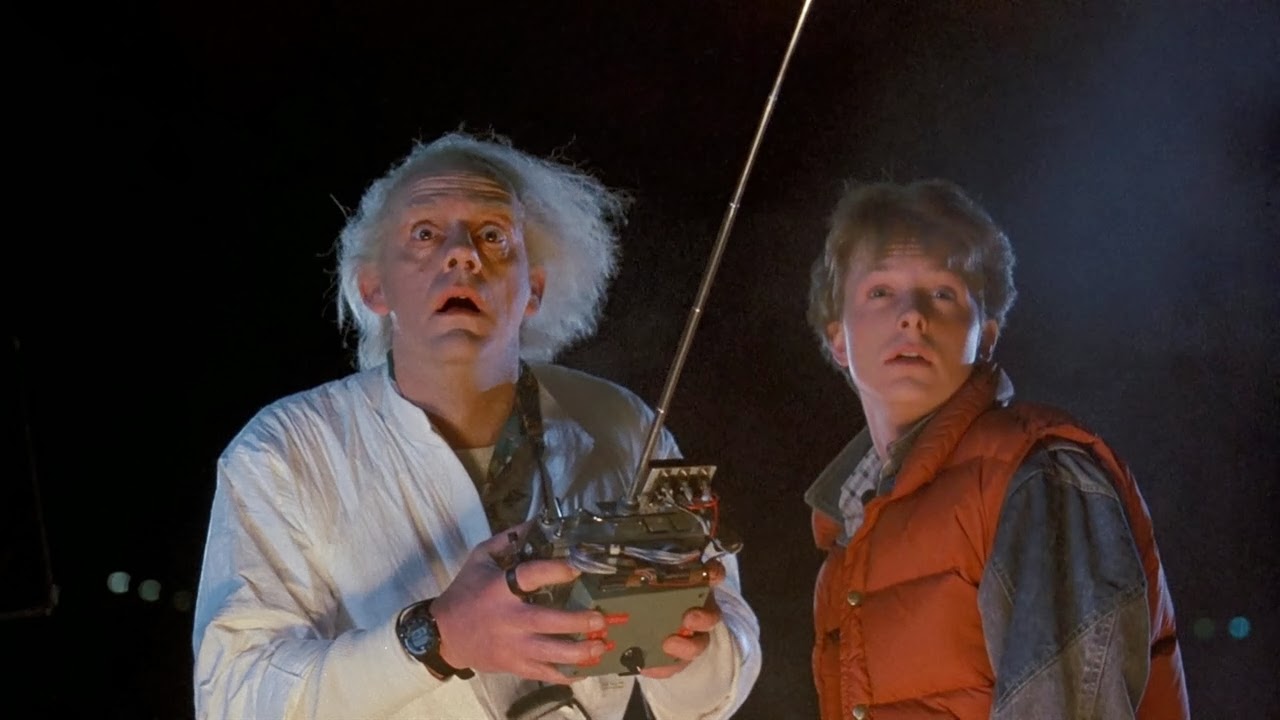 Marty and Dr. Brown trying to control the time machine in Back to the future II.
Of course we would not have written this post if we would not have started worrying already. We designed an experiment to predict the scary situation of exposure to past or future infectious diseases. And based on the results, we wrote a script for a brand new movie:
Back to the future IV!
There has always been rumors about a 4th Back to the future movie. But what probably has been lacking so far, is a good script indeed. For financial and practical constraints, we will not be casting humans for Back to the future IV, but water fleas (although this might change as soon as Steven Spielberg starts begging to collaborate). Water fleas (Daphnia magna) are small crustaceans living in ponds and lakes, where they graze phytoplankton. After the summer when food becomes scarce, they start producing eggs that sink to the bottom, where they stay until there are good conditions to hatch. This is usually the next spring. However, a large fraction of the eggs does not hatch at all, but gets trapped in the mud. Year after year layers of mud with trapped eggs accumulate at a certain sedimentation speed, with older eggs in the deepest layers and more recent eggs in the top layers. So, generation after generation, water flea eggs become archived in the sediment. Interestingly, these eggs can remain viable for a very long time. So, if you go to a lake, sample an undisturbed sediment core, put the mud of the core into slices, filter out the water flea eggs, and put them into an incubator, the eggs will hatch, even those which got trapped back in 1985. And hence, with a sediment core and an incubator you can build a time machine that allows bringing water fleas... back to the future!
Now this is not only possible for the water fleas, but also for some of their parasites, such as bacterial spores that cause infectious diseases. Simply exposing the water fleas to some of the mud can be sufficient to infect them with a nasty disease. And hence, all kind of wild scenarios of exposure of hosts to past or future parasites can be investigated by performing time-shift experiments with water fleas and their parasites. This concept is particularly interesting for the study of coevolution between hosts and parasites, i.e. the evolutionary changes that host and parasites undergo in response to each other. Back to the future IV will bring a particularly interesting scenario of host-parasite coevolution, known as the "Red Queen hypothesis". This hypothesis states that coevolution between hosts and parasites proceeds as a never-ending arms race, similar to the never-ending race between the character of Alice and the Red Queen in Alice in Wonderland. This race, which we refer to as "Red Queen dynamics", occurs at the genetic level (i.e. host genotypes against parasite genotypes), and is characterized by fluctuating cycles of infectivity: sometimes a parasite genotype performs well, but causes its preferred host genotype to go down, such that another host genotype takes over. But this also allows another parasite genotype to go up, which then facilitates the come back of the first host genotype. And so on. 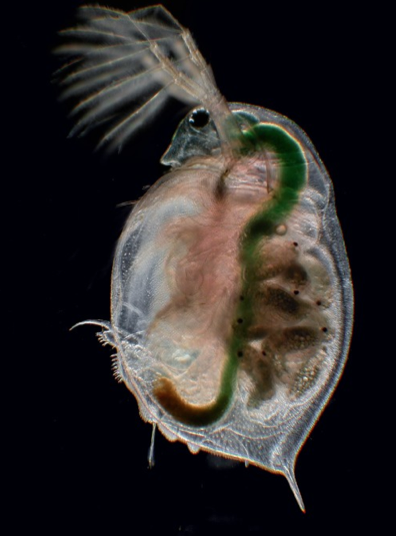 A perfectly healthy Daphnia magna (photo credit: Joachim Mergeay). Let's hope Marty's intestines look as healthy upon arrival on October 21th 2015...
The experiment we performed for Back to the future IV adds a surprising insight to this. Sending water fleas from the oldest layer of the sediment core forward in time by exposing them to parasites from all future layers, we observed very different levels of infectivity, i.e. Red Queen dynamics with strongly fluctuating cycles of infectivity. In contrast, sending water fleas from the most recent layer of the sediment core back in time by infecting them with parasites from all past layers, we observed much less variation in infectivity levels, i.e. Red Queen dynamics with dampened cycles of infectivity.

We tried to explain this asymmetry with something that no movie director has tried before to convince Hollywood - a mathematical model! We simulated a number of factors that might have been different between the water fleas from the oldest layer and the most recent layer, as this was essentially the only difference between the treatments. Crucially, the water fleas from the recent layer can be regarded as experienced hosts with respect to the parasite, while water fleas from the oldest layer are actually naive hosts. The model revealed that Red Queen dynamics most likely stabilize due to an accumulation of resistance alleles over time. The gain in experience from naive hosts in the past to experienced hosts in the present hence seems modulated by a larger arsenal of genes enhancing the host performance in its coevolution with the parasite.
So how do our findings help us to plan ahead Mr. Fox’s time travel from the past to 2015? It seems like infections with parasite strains from the past have predictable outcomes, since we are all relatively experienced hosts and we may have built molecular defences to fight the disease. So a big quarantine cage to welcome Mr. Fox would probably not be needed. In contrast, Mr. Fox might be at risk himself, as infection of human hosts from 1985 with 2015 bacteria might have very unpredictable outcomes. And of course, we have to prevent him to travel back to 1985 in a bad shape, as a 2015 disease might cause a pandemic for our parents and our younger selves.
We are now waiting anxiously for Hollywood to call us. We anticipate that they will be thrilled as our script also embraces a general principle of the importance of biological diversity in evolution and ecology. In community ecology, larger species richness leads to a greater stability of ecosystem properties. For host–parasite interactions, this is illustrated by the ‘dilution effect’: a negative correlation between host biodiversity and disease risk. Our results suggest that a similar mechanism might stabilize host–parasite dynamics at a lower level of diversity, i.e. at the level of genetic diversity within host species.
Coming soon... but hopefully before October 21th 2015!
Back to the future IV
Michael J. Fox encounters the Red Queen
based on
Ellen Decaestecker, Herbert de Gersem, Yannis Michalakis & Joost Raeymaekers (in press). Damped long-term host–parasite Red Queen coevolutionary dynamics: a reflection of dilution effects?
Ecology Letters.
For those that cannot wait, our script is available here.
By Joost Raeymaekers - October 21, 2013