In 2009-2010, I completed my sabbatical at the University of California in Davis. In reality, however, much of my time was spent on my family’s vineyard in Napa, California, where I lived for that year. (The vineyard and winery are owned by my uncle, George, and the vineyard manager is my brother, Mike.) Before arriving in California, I had pledged to myself that I would not start any new research projects but rather finish up some old ones and start a book on Eco-Evolutionary Dynamics. Here is the story of how serendipity – and perhaps a lot of fine wine – led me to break my vow.

Nearly every day, my kids (Aspen – 7 years old – and Cedar – 4 years old) and I would go for a stroll around the vineyard, taking pictures, reminiscing about old family stories back to 1939 when my grandfather bought the property, or just looking at the many critters that lived on the vineyard. A few weeks into our stay, we found ourselves walking along the creek that flows through the property. In fact, the creek does not actually flow during the summer because it dries up except for a few spring-fed pools. As we came to one of these pools, the kids got all excited about the small fish they could see rushing around in what little water remained. “Catch the fish daddy, catch the fish.” Well, it is hard to resist the kids when they want to catch fish, and so we got some small nets and set to it. To my complete surprise, it turned out that the most numerous fish in these tiny pools were threespine stickleback.

Now I was hard pressed to keep to my vow to not start a new research project given that stickleback are one of my major research topics. So I spent the next few days drinking wine and mulling over various projects that I might do, such as a study of how periodic drying into isolated pools shapes the “metapopulation” structure of a creek stickleback population. However, I eventually convinced myself that this would be forcing a new project that really wasn’t that closely related to my research. So I decided to set it aside and return to writing.

A few weeks later, one of our walks took us past the two reservoirs on the property and I happened to look in and notice some small fish swimming around. I looked closer – stickleback again! Now fate just seemed too obvious to ignore – we were literally living between a reservoir and a creek, and my stickleback research focuses on lake and stream populations. Moreover, the two reservoirs had been created in the early 1970s by pumping water from the creek – and this would have been how the stickleback colonized the reservoirs. So not only was it a lake-stream stickleback pair in our backyard but it was also a potential “rapid” evolution scenario – one of my other major research interests. How could I not study it? In particular, we decided to test if adaptive divergence had occurred between reservoir and creek stickleback in the 35 or so years since the reservoirs were created – and whether any such divergence was parallel (in the same direction) as that between the long-established lake-stream pairs I had studied in British Columbia (for example, stream stickleback essentially always have deeper bodies and fewer gill rakers than do lake stickleback). If so, we would have a particularly striking demonstration of the power, speed, and predictability of natural selection.

Aspen and Cedar set and retrieved the minnow traps, Cedar “died” the stickleback, I photographed them, and Aspen labeled and preserved them. The next year back home in Montreal, we continued the family project on rainy days and in the dead of winter. Aspen set the morphometric landmarks on the computer, Cedar took the fish out of the vials, I measured and dissected the fish (thanks to my mom donating her dissecting microscope), and Aspen recorded the data in the computer and returned the stickleback to the vials. The next year it was back to the vineyard for a second round of sampling and then came another winter of fish processing. Now, with two years of data in hand, it was time for some stats and writing, a task I will admit did not play to the kids’ expertise. Just a few weeks ago, the paper resulting from our project was published in Evolutionary Ecology Research, and so we can now spill the beans on our discoveries.

Our first major finding was no noteworthy divergence between creek and reservoir stickleback. Although this was initially disappointing, it eventually became more exciting – because it represented a dramatic exception to many other lake-stream pairs and to the frequent evidence for rapid evolution in stickleback. In short, it would be of limited value to just confirm what we already know about stickleback. Instead, the story became about solving the riddle of what makes the Hendry Vineyard stickleback situation unique. One likely possibility for the lack of creek-reservoir divergence is gene flow that prevents the populations from evolving separately in response to different selection regimes. And gene flow indeed could be high given that water continues to be pumped each year from the creek into the reservoirs (although filters are present and the pumps are probably not healthy for stickleback, some must make it through). To gain some initial insight into this possibility, Ella Bowles and Sean Rogers at the University of Calgary screen some of our samples for genetic variation at DNA microsatellites and found very low divergence – indicating high gene flow. So the story turns from one of the power, speed, and predictability of natural selection to a demonstration of constraints and limits on divergence.

Our second major finding was that morphological variation in Hendry Vineyard stickleback – in both reservoirs and in the creek – was extremely high. This was true for overall body shape and even more dramatically so for mouth shape – a key aspect of stickleback adaptation. In fact, consultation with many stickleback biologists suggests that the variation at these sites was higher than that in any other known stickleback population. So this will be our next project – to understand the origin and fate of morphological variation, which might yield insight into how new traits can arise and spread within populations. 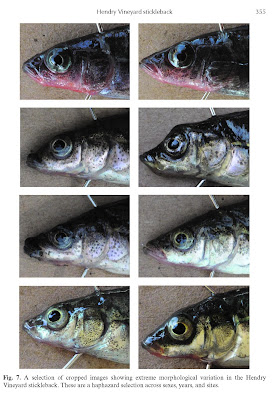 This week, we embarked on the first phase our new project during our annual visit to the vineyard. In reality, much of our time was spent building a new horse fence and exploring the Hendry wine library (thankfully a “living library” from which one periodically tests how the wines are ageing). However, we did have a full day to start the new project by collecting, photographing, and preserving 50 stickleback from one of the reservoirs. Over the next long, cold Montreal winter, we will use these fish to see if morphological variation (particularly the extremes of body and head shape) is associated with diet variation, which could be one possible reason for why such extreme morphological traits can arise and spread: that is, they are well suited for particular food types. Of course, many other questions remain, including whether these morphologies are genetically based or environmentally induced, a question we will address on my next sabbatical by setting up a stickleback breeding laboratory in a barn on the vineyard. Perhaps a stickleback library is not as good as a wine library but who says one can’t have both.

An earlier post about the Hendry Vineyard: The Kumbaya Model and the Jake Reset Effect
By Andrew Hendry - July 07, 2013