Of mites and men


Those that observe ecological dynamics have always stated that evolution plays a role, but it is only relatively recently that there has been a fever of interest in quantifying what that role might be. It is not the case that there was ever a lack of interest; it was just generally assumed that as evolution occurs on very long timescales, it will have little influence on contemporary ecological dynamics – certainly on the timescales over which ecologists would want to make predictions. But increasingly we have come to accept that phenotypic change can occur very quickly, in only a few generations, and we have a good body of evidence showing that “rapid” or “contemporary” evolutionary change in the underlying biology of species is common. (As an aside, I wonder if it should not be called “rapid” evolution, as it has recently been pointed out to me that palaeontologists see little more phenotypic change within species in thousands of generations than ecologists see in tens of generations.)

Much of the recent interest in contemporary evolutionary change was generated by the theory of harvest-induced selection, a framework in which it is thought that high trait-selective harvesting rates lead to a change in the frequency of traits in a population, diminishing the type of animal or plant that the harvester is seeking. More recently further interest has come from the question of species responses to current rates of environmental change. And so it was with these questions in mind that a project was born. What exactly is the contribution of evolution to the way in which populations respond to their environment, and how is this influenced by high (but reasonable) harvesting rates?

Our project was to compare the adaptation of populations of soil mites, taken from the wild and placed into environments differing in the form of environmental variation caused by experimental manipulation in the variance, but not the mean, of the food they received. In a recent paper (DOI: 10.1111/ele.12107) I presented the results of one of these environmental treatments: periodically varying food. The variation of the food is not so important for this blog post, so I won’t discuss it again here. Overlaid upon this, we harvested 40% of either juvenile or adult individuals each week, with an unharvested control. This harvest rate was estimated to be close to a maximum sustainable yield, based on harvesting adults. Other important information is that these soil mites have essentially three demographic stages: eggs, juveniles and adults. They are sexually dimorphic as adults and have a generation time of approximately five weeks. 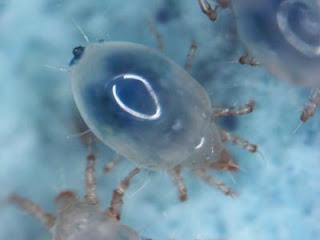 We have two main results. First, by placing mites from the wild into closed populations in the laboratory we created populations not suited to their new environment and the populations began to decline toward extinction. However, after only five generations this decline slowed and then reversed into a long-term increase. This dynamic occurred in all stages in each of the 18 tubes across all harvesting treatments. Our analysis of the life history found that there was a large delay in mite growth rates occurring during this period. Normally we think of a delay in growth to maturity as a negative response to poor conditions, but under the conditions the mites found themselves in compared to their wild ancestry, it was selected for. To understand why, we also looked at survival and fecundity. While survival was little changed, those mites that delayed their growth to maturity and spent a longer time in the juvenile stage could double their peak reproductive output. To confirm this pretty adaptive story that mites investing in increased individual reproductive output could rescue their population from extinction, we compared the population growth we would predict based on the life history of an average individual with the real population growth rates we observed in the population time series, and they were highly correlated. Indeed, if we do not use the changing life history trait values we observed throughout the experiment we cannot predict the recovery and long-term population size increase we saw in the experiment. Finally, we were able to show that this delay in age-to-maturity was linked to patterns of change in the genetic diversity in the populations, suggesting that natural selection was an important factor in the ecological dynamics even over just a few generations.

Harvesting had both an ecological and an eco-evolutionary effect on the population dynamics. Its eco-evolutionary effect was to prevent individuals from juvenile-harvested populations from reaching the optimal phenotype, as they could not stay in the juvenile stage too long or the populations would go extinct. Adult-harvested populations produced individuals that delayed maturity a little longer but matured larger, which we suggest is an adaptive response that increases fecundity early in adult life. These results are exactly what we would predict from current theory. Certainly the ecological effects of harvesting were strong, in that when we ceased harvesting the population dynamics of all treatments were more similar; but differences remained for many generations, especially in terms of population variation.

So our take-home message from our first result from this project is that ecology and evolution are not as separate as we have traditionally assumed. Even over a few generations we can see that evolution has a role to play in how populations respond to environmental change, whether biotic (e.g. harvesting) or abiotic (e.g. climate change).

There has been some criticism of microcosm studies of harvest-induced evolution that they produce trait change underpinned by selection far faster (i.e. 10% per generation) than the slow rates observed in the heavily exploited wild populations (1–2%). In our study, in which mites were simply enclosed in population tubes and exposed to strong density-dependent competition for food and then harvested near the maximum sustainable yield, we saw a 4% per generation response to environmental change and a 1.4% per generation change in response to harvesting. This clearly places the trait changes we saw in the “slow” category and suggests that even slow rates of harvest-induced evolution can have significant and long-term effects on population dynamics. Our results are therefore further evidence that evolutionary considerations should be taken into account in harvesting management. By this I do not necessarily mean the harvest rate, as I think ecological models can mostly deal with this; rather, I mean in terms of making realistic predictions regarding whether harvested populations will recover from overexploitation, and how long such recovery might take.

How important are these results of contemporary/rapid evolution? Well, the truth is we do not know. Many studies have concluded that rapid or contemporary evolution may have repercussions beyond population ecology, for example in ecosystem services and ecological community structure, resilience and function; but to date there are few (if any?) examples in which this has been demonstrated. For this reason, I would suggest that future studies of the role of evolution in ecological dynamics should turn toward community ecology.