Carnival of Evolution #58 is now up!  Although they got the name of our blog wrong, Felipe Dargent's post on mixed-species groups made it in!  A month later than it was supposed to go in, but nevertheless, it made it.  :-O  Joost Raeymaker's post on parasite-induced evolution in cichlids was supposed to be our nomination for this month, but, well, there has been a bit of confusion lately.  Perhaps it will make it into next month's Carnival.  :->  Check out Synthetic Daisies to see all the other groovy evolution-related posts up there now!

The theme this month is the future of evolution, so here's a possible future for human evolution.  Dig the threads, man. 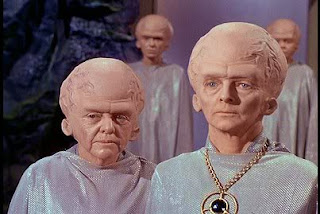