In early March I headed up to Abisko, Sweden, for a "winter school" on eco-evolutionary modeling of speciation.  The school was offered by FroSpects, which been hosting some great workshops, conferences, and schools lately, including the Speciation 2010 conference in Austria last December that Andrew wrote a post about (and by the way, videos are now posted for all the talks at Speciation 2010).

Abisko is easily the most remote place I've ever been.  It's a bit north of the Arctic circle, so when they called this a "winter school" they meant it.  We got lucky, though; the week before the school, temperatures were -35°C and the road to Abisko was closed by snow (by an avalanche, in fact, I think), but the week I was there was relatively clement, and we even got several clear nights when we could see the Aurora borealis: 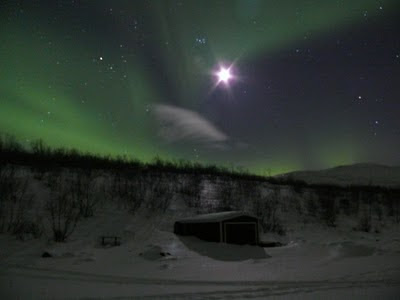 Abisko was a stunningly beautiful place, in a very stark, barren way: 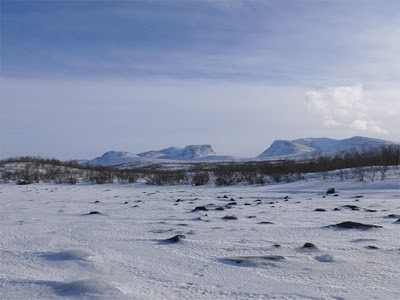 Those who want to see more photos and such can check out my travel blog, but from here on in I'll focus on the science.  We had talks by (in order of appearance) Ulf Dieckmann, Åke Brännström, Eva Kisdi, Rupert Mazzucco, Akira Sasaki, Katja Enberg, Sander van Doorn, and Ole Seehausen.  We also had some discussions and student presentations, but most of our time was spent in lectures.  I think there were twenty students in all, with about a 50-50 mix between modelers and empirical biologists; model systems particularly well-represented at the school included sticklebacks, Heliconius butterflies, and African cichlid fish, but we also had students studying phytoplankton, parasitoid wasps, mice, Wolbachia bacteria in grasshoppers, potato blight, and bacteriophage ecology, among others.  Most of us were PhD students, but we had one precocious undergrad, one postdoc, and one university lecturer, if I got my count right.


A myriad of models

For me, probably the most striking thing about the school was the breadth of modeling techniques discussed.  It was nice to see all of these in one big tent, as it the expression goes; all of these methods have their place.

Eva Kisdi and Sander van Doorn discussed mostly adaptive dynamics models.  These models handle evolutionary branching and speciation particularly well, because they go beyond a study of equilibrium to look at how a population evolves over time, and because they can accommodate a population that branches into distinct phenotypes, unlike approaches that model only the mean and variance of a population and can thus only accommodate unimodal phenotypic distributions.  This type of modeling is not my field, so I was surprised to see how broadly applicable it can be; adaptive dynamics models were discussed for sexual organisms, for example, and for genetically explicit organisms with properties such as dominance (Peischl & Schneider 2009). Åke Brännström also gave a quick talk about using an adaptive dynamics approach to model the evolution of food webs and the process of ecological diversification.

Rupert Mazzucco discussed individual-based models, mostly from a broad philosophical perspective.  These models are ideal for cases where one has reason to believe that a bottom-up approach is best, because individual variation in genetics, behavior, and so forth matter to the emergent high-level pattern of evolution, or because individual-level phenomena such as demographic stochasticity are likely to be important.  Rupert also discussed some implementation issues related to continuous-time individual-based models, such as an event-scheduling technique (Allen & Dytham 2009) that will speed up some of my models considerably.

Katja Enberg talked about "eco-genetic models," which use an individual-based approach combined with empirically parameterized ecological and life-history traits to create unusually realistic models incorporating density-dependent and frequency-dependent ecological feedbacks, phenotypic plasticity, explicit genetics, and other factors.  These models can yield realistic population dynamics and predictions of multi-trait evolutionary rates and sequences, and can even predict evolutionary responses to human influences. The models she discussed were of Atlantic cod (e.g. Enberg et al. 2009), which have been drastically overfished and have evolved (and crashed) in response to that fishing pressure; but this technique seems very promising for other systems as well.

Akira Sasaki presented traditional analytical models (i.e. based on differential equations) of species packing, beginning with the classic models of MacArthur and May from the 1970s, and then showed some of his own work that connects these concepts to spatial distributions of species and heterogeneous distributions of resources (Sasaki 1997).  The connection to speciation may not be immediately apparent, but in fact this was rather mind-blowing for me because it finally explained for me the reasons for the spatial patterns observed in classic individual-based models of competition and speciation such as Doebeli & Dieckmann (2003).  If reproductive isolation often begins with isolation by distance, then spatial patterns may be very important to speciation.

Finally, Ole Seehausen gave a broad, historical perspective on speciation, and presented some of his empirical work on speciation in African cichlids (e.g. Seehausen et al. 2008). He and Sander van Doorn discussed the sensory drive speciation model from both an empirical and a theoretical perspective, and they led a quick workshop that tried to integrate all of these ideas together to show how empirical work is related to theoretical modeling, and how each can benefit from the other.  For me, this was the most challenging part of the school; both the empirical findings and the models were quite complicated, and then the conceptual work of integrating the two perspectives together proved quite difficult!

As at Speciation 2010, one hot topic during the school was the idea of "magic traits".  There was much discussion, and little agreement, about what is or is not a magic trait, how common they are in nature, how important they are to speciation, and even whether or not it's a term that we ought to use.  It is apparent that the ideas in this area are important; but there is a pressing need for greater clarity, both terminological and conceptual, so we can avoid endless semantic tail-chasing.

Beyond that, probably the most prevalent theme of the school was the future of speciation work, both empirical and theoretical.  There certainly seems to be a growing consensus that the old paradigm of dividing speciation into allopatric and sympatric (and then categorically stating that sympatric speciation doesn't exist :->) is dead.  But what exactly is going to replace it?  There needs to be, it seems, more of a focus on the details of process.  It's highly unlikely that every speciation unfolds in the same way; instead, there appear to be many ways that it can be affected by natural selection and by sexual selection, by ecology and by the environment.  Allopatry and sympatry are limiting cases, but different degrees of parapatry may be the rule. Speciation can be talked about in both sexual and asexual organisms, but the processes are likely very different; and of course there are shades of gray here, too, with facultative selfing in plants, lateral gene transfer in bacteria, and so forth. Different forces may operate at different stages of the speciation process, and the rate of the process may vary dramatically over time — or even reverse.  Genetic details can matter a lot to all of this, as can individual-level behaviors such as mate choice and dispersal behavior.  And speciation will itself interact with other evolutionary processes; one interesting question raised during the school was whether magic traits might be selected for, and thus tend to be available to trigger later speciation.  Speciation is a bottomless cornucopia of beautiful complexity; it will keep us all busy for a long time to come.

One thing we all agreed on, though, is that if progress is to be made it will be essential for theorists and empiricists to communicate more, but it seemed difficult to elucidate concrete ideas to promote this.  One idea that someone proposed is a sort of theorist/empiricist "dating service," a website, presumably, where theoreticians looking for particular sorts of empirical systems to model could get matched up with empiricists looking for modelers with particular skill sets and interests.  Anybody out there want to set this up?  For me, though, the simplest way forward was exemplified by the school itself: get theorists and empiricists together in one room, and let them talk to each other.

I'll leave you with a group photo of (most of) the students and instructors at the school: 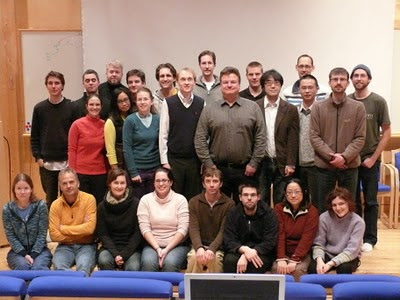 Thanks to FroSpects, and more specifically to Ulf and Åke, for organizing this school, and thanks to the instructors, who volunteered their time and their enthusiasm.  Thanks also to my fellow students, who were both brilliant and fun to hang with.  This school embodied, for me, the best of the spirit of science.  I'm already looking forward to the next FroSpects event I'm going to attend, the Niche Theory and Speciation workshop in Hungary this fall, and they've got many more upcoming events that you might want to keep your eye on.