Adding sheep to the mountain

When I teach wildlife management, I start by saying that wildlife got along very nicely, thank you, long before people wanted to manage it.  As with most of conservation biology, wildlife management usually involves minimizing the negative impacts of people.  That often includes remnant populations that are so small that their chances of persistence are tiny.  Enter wildlife management, through translocations.

Translocations are very popular: they make it look like you're doing something.  You can take pictures of animals being released! But do they work, and are they justified? Supplementations are appropriate when population recovery appears limited by genetic factors, or simply by small numbers.  If habitat is available and the population is not limited by disease, predation, poaching or other persisting threats, then if you release additional animals you should increase genetic variability, diminish the risk of inbreeding and see a faster increase in numbers. A well-known and apparently successful recent example is the supplementation of 'Florida panthers' with 'Texas cougars' (sometime we'll need a blog about local names of the same animal...).  Another case that is much discussed and may or may not happen is the supplementation of the last 1-2 wolves left in Isle Royale National Park.

Supplementations are not risk-free. They could break local adaptations or introduce pathogens.  When remaining numbers are very low, however, inbreeding becomes nearly inevitable and transplants are a reasonable option, provided a suitable source population exists.

But what happens after the photo-op is over and transplanted animals are left to their own devices? Few studies have examined the social integration of individuals.  In many species, social integration is essential, for example to ensure that transplanted individuals learn the location of seasonal food sources or integrate groups to participate in antipredator vigilance.  We took advantage of a supplementation of the Ram Mountain population of bighorn sheep to explore this topic.

First, a bit of history.  Bighorn sheep at Ram Mountain have been monitored since 1971.  After several years of experimental ewe removals, the population was allowed to increase and more than doubled, from 105 in 1980 to 232 in 1991.  It then began to decline. Perhaps overly confident that density-dependence is all that matters with ungulate populations, in 1997 we removed 14 of 83 ewes, expecting a positive response in population growth.  Little did we know...  Partly because of cougar predation, the population plummeted, from 189 in 1996 to 40 in 2002. It then stagnated for 5 years, and inbreeding limited lamb survival. The cougar predation episode ended in 2000.  To attempt a demographic and genetic rescue, we transplanted 12 adult sheep in 2005, from an abundant source population about 130 km to the north-west. Near-total failure: only 1 of 6 ewes and 2 of 6 rams remained to reproduce, the others disappeared.  The ones that remained were young, so we thought age may be a factor in transplant success. We tried again: in March 2007 we released 12 yearlings.  Partial success: 2 ewes and 3 rams reproduced on Ram Mountain, but not until 3 years later. Things started to look good: genes from the transplanted sheep spread in the population and lambs with 'introduced' genes seemed to have better survival than 'resident' lambs. The population increased to 74 by 2012. Then, a setback: another cougar started preying on sheep, 10 of 28 adult ewes disappeared over a year, and by 2014 we were back to 46 sheep. A cougar was shot during the hunting season and predation appeared to stop, so in 2015 we conducted a third transplant.  By then, the source population had had a few years of poor recruitment and did not include many young sheep, so we could not be too choosy.  Our colleagues in the field caught 9 sheep: one male yearling and 8 ewes aged 1 to 3 years.  They were flown to Ram Mountain in March and April, and we observed them from late May to late September that year and the following year.

Initially, the 'new' sheep were mostly on their own and spent a lot of time alert.  They seemed to avoid the residents, as confirmed by social network analyses. So much for the idea that all sheep are equal and just follow each other.  This was not good, as we had just published results suggesting that sociality increases fitness: there are reasons why sheep behave like sheep!  As the summer progressed, the transplanted sheep spent more time with the residents, but both residents and transplants spent more time alert when in 'mixed' groups, appearing nervous about each other.  The transplanted sheep also received three times more aggressive behaviors, mostly horn butts, than residents of the same age.  Slow social integration appeared to have negative consequences: transplanted sheep gained 20% less mass during the summer than residents of the same age.  That was possibly because they were recovering from the stress of capture and transplant, but we suspect that the difficult social integration and lack of local knowledge about where to forage also played a role.

One year later, the transplanted sheep seemed fully integrated in the local population and their mass gain was similar to that of residents.  They all survived to 2017, when 6 of the 8 ewes produced lambs, contributing to a population increase of 27% from 2016, the highest we have ever seen and close to the theoretical maximum for the species.

So, what did we learn?  Social integration is important, and genetic rescue is possible but not easy.  The population of 88 sheep in September 2017 is more than double what it was in 2006, but considering that we moved 33 sheep over 10 years, this does not look like a resounding conservation success. Less than half of transplanted sheep contributed genes to the Ram Mountain population. Eleven were still on Ram Mountain in September 2017.  Yet, projections based on vital rates from the last 14 years suggest that without the transplant the population had a high risk of extinction. The transplant was justified, but it was not cheap: it required helicopters and help from wildlife biologists, veterinarians and volunteers.  It was only possible through the initiative and support of Alberta Fish & Wildlife biologists and the Alberta Section of the Wild Sheep Society, hunter-conservationists that contributed both financially and logistically to this exercise.

Ours is not the first well-documented genetic and demographic rescue of a bighorn sheep population: a similar successful experiment was undertaken by Jack Hogg at the National Bison Range in Montana.  Similarly to what we found at Ram Mountain, Jack had documented inbreeding and loss of genetic diversity, while habitat availability and predation did not appear to be limiting factors.  Transplants are expensive and involve risks. They should not be used unless the need is well documented and the chance of success substantial. 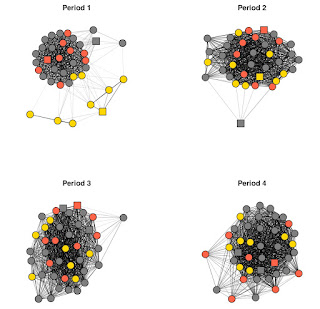 The social network of bighorn sheep females and yearling rams at Ram Mountain. Period 1 is from late May to July 2015, period 2 is from August to late September 2015.  Periods 3 and 4 are at the same dates for 2016.  Translocated sheep are yellow, the orange symbols are 9 resident sheep of the same sex-age class as the transplants and grey symbols are other resident sheep.  Circles are females, squares are yearling males.  From Poirier and Festa-Bianchet 2018. 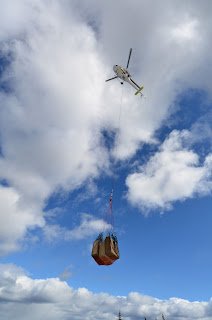 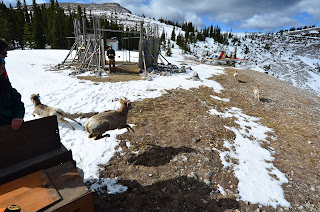 The photo op!  Transplanted sheep released near the sheep trap, April 2015.  All nine sheep released in 2015 were still on the mountain in September 2017.  Photo credit Jon Jorgenson.
By Marco Festa-Bianchet - January 05, 2018