25 years later – Alaska on my mind

Several years ago, I wrote a blog post called “Trinidad on my mind”, for which I extracted a number of journal entries from my years of research in Trinidad. Today I am on a plane on my way to Haida Gwaii, British Columbia, for field work and I was debating what would be a post I would enjoy writing. I started digging through old journals on my computer – dating back to 1992, when I got my first computer. Among these were notes I had written from my pre-MSc work in Alaska – I ended up spending parts of 10 consecutive summers in Alaska. Much of the writing is a bit too flowery to put on this blog but reading it was fun enough to make me want to extract and compile some for a post “Alaska on my mind.” My edits are minimal – this is pretty much what I wrote at the time. I will presumably follow this post at some future date with other entries from field work.

It was the summer of 1992 and I had a job as a deck hand on a tender converted to a gill-netter.  I was employed by the University of Washington to participate in a test fishery which was used to predict the size and timing of each year's Bristol Bay sockeye salmon run.*

It was 4:00 P.M. on June 27th.  It was miserable.  The sea was rough and the wind chill, blowing at 25 knots.  Flying spray stung cheeks, eyes smarted from the salt.  Waves broke over the back of the boat immersing us continually as we worked to strip salmon from the dripping gill net coming over the stern.  We were on our fourth set of the day.  Each of the earlier sets had broken records for numbers of salmon taken this year so far.  We were cold, wet, tired and hungry all at the same time.  I loved it.

There was something aesthetically pleasing about wading ankle deep in salmon while racing the other crew members to see who could remove the most fish from the net without breaking the mesh.  Every so often an unexpected bonus would come along in the form of a 30 pound king salmon. 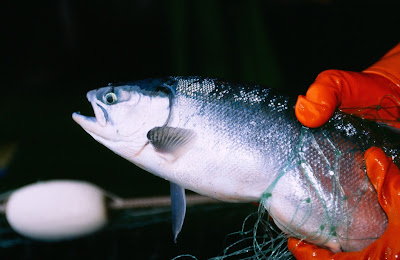 On seeing the big grey form in the net a hundred feet away, my first thought was that we had an even bigger king.  A second look however, and I realized that this was much larger than any king I had ever seen. "Dolphin!"  It was an exclamation of pure horror from the entire crew when we realized what was in the net.  We had all heard stories of the horrors of drift nets but this was striking much too close to home.  Almost instantly, everyone was galvanized into frenzied action.

Mike quickly reeled the net and the surprisingly placid harbor porpoise to the back of the boat.  Chris and I leaned out and began to frantically break the mesh around the porpoise.  Blake manned the boat controls giving us as much stability as possible to work.  Initially, the porpoise was so calm, I feared it was already dead but when we had it beside the boat we could see it was moving slightly.  It didn't appear to be badly injured. and the only sign of damage was blood from a cut on the dorsal fin.  Was it drowning?

From our position at the extreme stern of the boat, we were still 4 or 5 feet from the porpoise but the holes we were ripping in the net were getting us closer.  I was leaning out so far and pulling so hard on the mesh that my legs lifted 2 feet off the deck before Mike grabbed them and held me from going overboard.  The following sea continued to wash waves through the stern opening threatening to wash everything away.  I continued to pull on the mesh until it felt like my fingers were going to be amputated.  A last convulsive heave on the net and the porpoise's body fell free.  Realizing now it was close to freedom, it began to try and swim with only its tail still caught in the mesh.  Then in a frenzy it ripped free.  As it swam slowly off, we all watched in physical and emotional exhaustion.

The Russians Have Landed

Scholarship is a great way to cross national and international boundaries.  Scholarship brings people together where national policy and human kindness fail.  The  Bering Sea has a western coast line as well as its better known eastern shore in Alaska.  Not surprisingly, the rivers of the Kamchatka and Siberia also welcome the return of the salmon each summer.

Four Russian fisheries biologists visited us at our camp on Porcupine Island, Illiamna.  They had a translator with them and during their visit discussed common problems, ongoing studies, and issues in fisheries management with the professors from the University of Washington.  Apparently, this trip was also the first for the translator and we could usually communicate as well without her help as with it.  She did spend a long time teaching me some survival words in Russian.  Basically, "I am hungry, feed me now."  This brought my command of that phrase to a total of five languages.

What I remember most though was that these two particular Russians were musical and, in the evening, provided rare entertainment.  One played the accordion and the other the guitar.  Picture this.  Two Russians who spoke virtually no English entertaining a bunch of American graduate students and professors in Alaska with classic American cowboy songs, sung in English.  It was great.  Their favorite, and mine, was "Ghost Riders in the Sky."    Someday, I may want to study fisheries in Kamchatka, go fishing on the other side of the Bering sea or simply to listen to a Russian concert of cowboy songs or a Beatles medley.

Research at Iliamna was really fun because most of it was in the water.  Although I had not brought my dry suit and had no initial research project, I managed to weasel my way into an average of an hour in the water each day.  It was quite cold (8-10 degrees C) considering the old wet suit I had, which was too large.  After a 1/2 hour or so I would be chilly, cold at 45 minutes and shivering by an hour.  I took to wearing socks, long underwear and two T-shirts to reduce water flow through my suit.

I had several jobs.  One was to collect sculpins.  To do this, I would simply kick my feet on the rocks in a salmon spawning area.  When the sculpins swam out I would dive down and catch them in an aquarium net.  After I had a few in the net, I would swim to shore and put them in a floating cage.  While I quite enjoyed it, several times I had to collect 100 of the little devils after I had already been in the water for over an hour at one stretch.  During these episodes, I was always amazed at how many sculpin sized crevices could for refuges for my diminutive prey. A second job was to count sculpins in a series of quadrants.  This was rather mundane and consisted of digging through all the rocks in 14, 1m2 quadrants and tallying the sculpins in four size classes. 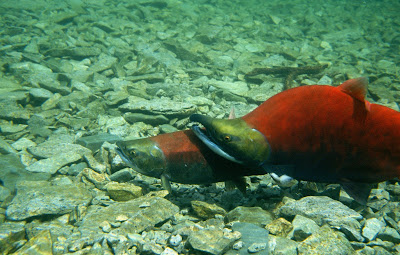 I also had my own study, designed to determine how separate two adjacent spawning populations actually were.  Every day I would swim a 100m transect which ran across both populations and record the condition of each female and the number of attendant males in each 2.5m section.  The second part was more fun.  I used a 'Hawaiian sling', with a sharpened tube loaded with a barbed tag, to tag the right side of 22 males at one site and the left side of 22 males at the other site.  I did this twice, the second time using 1/2 sized tags.  Then, each day I would record the numbers of males of each tag type at each site along the transect.  It was a blast but occasionally I would make three or four dives in a row where every male had its wrong side toward me.  Twice, I was able to tag two fish on a single dive.** 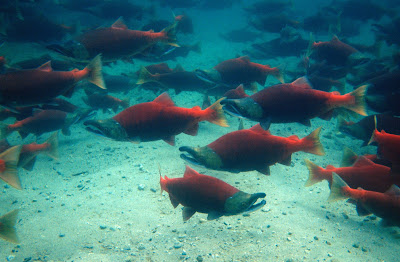 That's all for now. I will revisit some field notes again at some future date.

* I also worked on this test fishery in 1993. Later that summer, our boat – the 69’ Nettie H – sank with all hands lost, including our captain for my two years on the test fishery, Blake Grinstein.

** I later published this as my first first-authored paper.