Rapid evolution and ecosystem services. What have you done for me lately?


Be honest now. How often does a cross-building collaboration between two grad students get launched? Our paper, now available on early view in TREE, is the result of a couple PhD students from different departments at UBC learning through the grapevine that they were thinking about the same idea: recent evolutionary processes that lead to ecosystem services. Seth (Zoology) already had a manuscript when Maayan (Resources, Environment, and Sustainability) heard about him through a mutual friend and they joined forces. We both had a remarkably similar take on the idea that rapid evolution could generate not just costs, but also services that benefit people. Though writing a paper that’s accessible for both conservation scientists and evolutionary biologists was a bit challenging, we had good representation of the two ‘sides’ between the two of us (as well as Kai and Dolph) so the battles were balanced and we ended up understanding more about each other’s disciplinary quirks and anxieties: Maayan now knows the fine differences between evolutionary and genetic rescue; Seth knows never to conflate ecosystem service supply with benefit. After 15 months of deciding on examples, wrangling terms, and creating and destroying framing categories, the paper is done, and it’s pretty much what we had in mind: an ‘idea’ piece squarely aimed at both conservation scientists and evolutionary ecologists exploring how sometimes rapidly evolving species can benefit people. 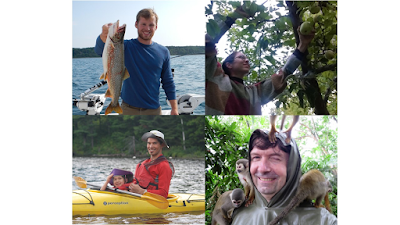 The authors benefitting from eco- and evo-system services. Clockwise from top left: Seth Rudman holding a beautiful and delicious Lake Michigan Lake Trout (Salvelinus namaycush), the abundance of which may have been buoyed by character displacement between alewife and bloater chub. Maayan Kreitzman picking an apple that was probably not too badly infested with the Apple Maggot (Rhagoletis pommonella) due to the cascading speciation of R. pomonella predators. Dolph Schluter clearly enjoying the sense of place imparted by getting close to squirrel monkeys on the Amazon River near Leticia, Colombia. Kai Chan glowing from the cultural and social cohesion generated with his daughter while kayaking on Campbell Lake near Parry Sound, Ontario.

Eco-evolutionary dynamics and people
Rapid evolution can alter ecological process, but how best to quantify this alteration?  Previous work has used measures of the effect size of intraspecific variation on the abundances of interacting species, metrics of community composition, and measures of ecosystem functions (a fantastic early example is [1]).  Yet, as biologists who are keenly aware of the goods and services that nature provides for human health and well-being, perhaps measuring or calculating the contribution of rapid evolution to ecosystem services is more informative in some cases.  The ecosystem services concept links the functioning of ecosystems and the material or nonmaterial benefits that humans derive from them. (As such, ecosystem services is an unabashedly anthropocentric concept - though not necessarily an exclusively materialistic one. So when we talk about benefits and costs, we’re doing so in the ecosystem services context, ie from a human perspective, not from the perspective of other species.) By assessing the way that rapid evolutionary change alters ecosystem services we could focus our efforts on measuring how evolution alters the components of communities and ecosystems we humans rely upon the most, thereby translating the importance of rapid evolution into units often used for conservation and management decisions.  In our TREE paper (freshly available on early view [2]), we hope to provide a foundation for such work by providing a framework for rapid evolution and ecosystem services, and describing some promising examples.

A history of the term ‘evosystem services’
This previous work, while it recognized the potentially beneficial role of rapid evolution, had a different focus and orientation: the aim of Faith et al. 2010 and Hendry et al. 2010 was to use the increasingly popular language of ecosystem services to draw attention to the importance of preserving biodiversity. In our initial submission we roundly criticized this term as being too meta-scale to be informative and we considered repurposing the term evosystem services to refer only to the contemporary contribution of evolution to ecosystem services. We came to our sense when we paid greater attention to the history of the term.  In part, this was due to the interesting history the proprietor of this blog (Andrew Hendry) shared with us  on his review for TREE of our second submission (reproduced with permission and a few small tweaks by Hendry, emphasis ours):


There’s no conceptual conflict between the inclusive definition of evosystem services, as forwarded by Faith and Hendry, and our definition of contemporary evosystem services as a nested subset within that. But, there is perhaps a legitimate tension in the values encoded by these two terms - which has resulted in some debate and even misunderstanding as we’ve attempted to get this work published. The group that Hendry refers to was concerned that conservation science and policy was heading in a direction that put too much value on particular services that might be provided by low-diversity or otherwise artificial types of systems (for example carbon sequestration using fast-growing alien species) at the expense of a more traditional conservation approach based on the preservation of biodiversity and the intrinsic value of nature. We on the other hand wanted to lay the foundation to study particular cases where a specific evolutionary processes might be providing specific ecosystem service in order to better understand and manage those systems. Therefore, it might be fair to characterize the two approaches as supportive of macro-management vs micromanagement. The thing is, we think both are important. We are far from presuming that it’s possible or even desireable to micromanage all the places where rapid evolution is occurring in order to maximize units of service. But neither do we think that general insight about the potential value of biodiversity over the long term can replace system specific knowledge in management scenarios. There is a middle ground between the arrogant micromanaging of nature, and the too-general assertion that diversity is a good thing to conserve.

Gene flow could also provide contemporary evosystem services.  For example, several recent models [9,10] suggest that sufficient influx of susceptible genes from oceanic sea lice to salmon aquaculture net-pens delays or prevents the evolution of insecticide resistance on farms. The observation that insecticide-resistant sea lice are absent from salmon aquaculture located in the North Pacific (where large populations of wild salmon exist) compared to the prevalence of insecticide resistance in the South Pacific and Atlantic (where there are small or no wild salmon populations) seems to support this.  Other examples of putative contemporary evosystem services from gene flow are 1) cases of genetic rescue, when migration from another population provides an influx of genes that restores positive population growth to a population that would otherwise perish from inbreeding depression, and 2) mitigation of fishery size selection through gene flow from a marine protected area.


Environmental change necessitates that evolutionary biology and conservation be integrated and tremendous progress has been made in the past decade.  Our opinion is that measuring and understanding contemporary evosystem services could further contribute to this integration. Our end-goal is to spur research that comprehensively assesses how evolution alters ecosystem services (e.g. the services and the dis-services from rapid evolution), which we feel will yield an improved understanding of ecosystem services today and in the future.