Special Issues: What are they good for?

I have helped to edit nine journal special issues and another two are in preparation. The published issues include 133 papers. I have spent a lot of time editing these special issues – and writing the introductory papers for them, and so it might be reasonable to ask: Is it worth it?

The main reasons I edit special issues are two-fold. First, I am usually asked to do so by a journal editor, a friend, or a colleague (sometimes all three being the same) – and I am a sucker for a personal invitation to help with something. Second, special issues have all the fun parts and none of the painful parts of editing: you get to structure the special issue the way you want, you get to invite the people you want to invite, acceptance rates are high, the papers tend to well cited, and it is generally a low-pressure exercise. However, to what extent can these personal assertions be supported by hard data?

Special issues come in two general forms: those associated with a particular symposium or those collecting papers by invitation outside of a symposium. The latter are perhaps more obviously beneficial in all the above respects. For instance, the 8 papers in the 2007 special issue of Functional Ecology that I helped to edit have been cited a 2048 times (Web of Science). However, conference special issues are perhaps less obviously beneficial and so warrant a formal analysis. In the most recent special issue that Katie Peichel and I helped to edit – the proceedings of the 8th International Conference onStickleback Behavior and Evolution – we decided to attempt such an analysis in our introductory paper. The rest of this post repeats parts of that paper, with permission from the journal (Evolutionary Ecology Research). If you are interested, more can be found in the paper itself.

Special issues resulting from conferences are often published in peer-reviewed journals, yet it might not be clear to what extent those issues are beneficial for journals, authors, or editors. To address this ambiguity, we here use citation statistics from the first seven stickleback special issues to quantitatively address two questions: (1) Should journals publish special issues? and (2) Should researchers publish their work in special issues? … Finally, we comment from personal experience how special issues are useful for the editors that shepherd them through the process. 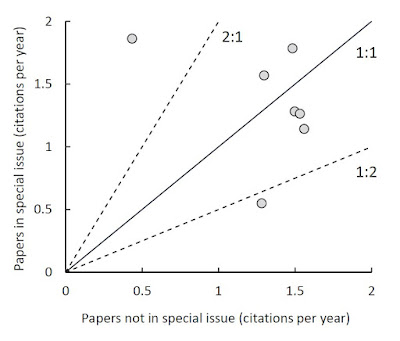 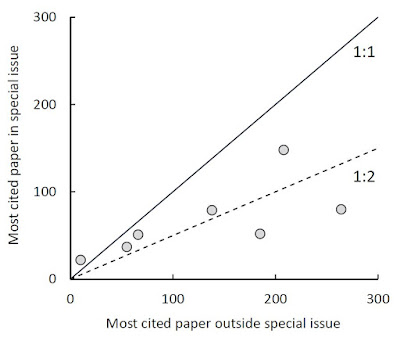 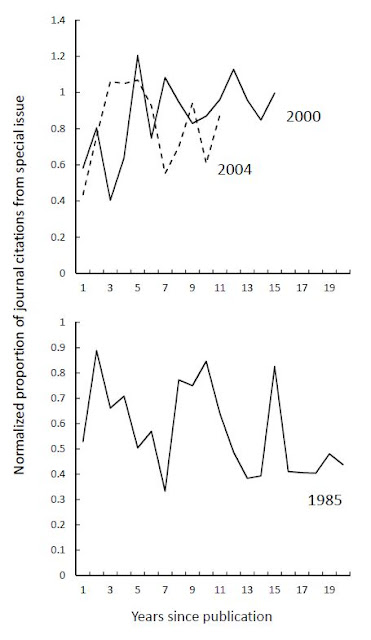 We conclude that papers inside special issues are doing nearly as well, and sometimes better, than papers outside special issues in a given journal/year. More importantly, conference special issues mean that journals are supporting a collective scientific endeavor that brings researchers together in a shared arena to exchange ideas, which benefits the field even if it doesn’t directly benefit the journal. Surely this service to the scientific community is something that all journals should promote.

Should you publish in a special issue?

Authors typically select journals for submission according to some perceived optimal combination of exposure (and hence citation rates), prestige (and therefore hiring prospects), cost (depending on resources), accessibility (depending on philosophy), and probably of acceptance (depending on haste). These factors trade off with each other and even the optimal strategy might not pay off owing to inherent stochasticity in the system. How should special issues factor into an author’s decision? Typical benefits of such issues can include exposure (at least to people in the same field), cost (usually non-existent), and probability of acceptance (generally high). Typical – or at least perceived – detriments include prestige (sometimes assumed to be low) and exposure (to people outside the field). We can consider how some of these factors play out by examining citation rates. 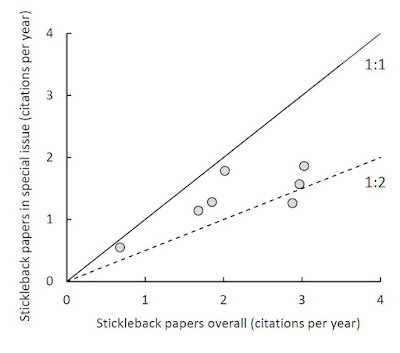 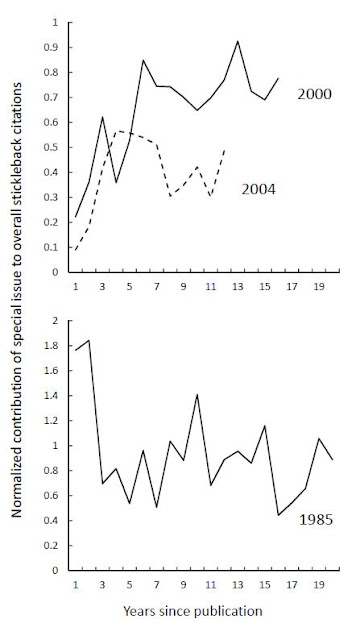 We suggest that – if only from the perspective of citation rates – authors will probably want to target their very best empirical work to journals with a higher impact than those typically publishing conference special issues. However, it could be a better decision to target other solid work for special issues, where exposure to people in the same field will be higher, where citation rates can be as high as elsewhere, and where acceptance is more likely.

Should you edit a special issue?

First, editing a conference special issue affords an opportunity to read a diverse set of interesting papers – in essence, an editor gets a contemporary cross-section of work in a given field from a diversity of authors.

Third, making editorial decisions is usually much more enjoyable. Although not every paper submitted to a special issue is published there, acceptance rates are generally very high. With much of the anxiety about acceptance versus rejection out of the way, editing becomes a rewarding process of working with reviewers and authors to make the papers as good as they can be.

Fourth, conference special issues are important for the field, the community, and the continuance of the conference. For instance, they greatly facilitate scientific interactions by pointing authors to opportunities for cross-citation within the special issue, which can lead to new collaborations.


Yet we are stickleback biologists – so what would an editor not working with stickleback get out of a special issue? So let’s turn to Evolutionary Ecology Research Editor-In-Chief Mike Rosenzweig for his thoughts, which were sent to us when he reviewed this paper in manuscript form. “I would have added one important item to your list. Virtually all biological investigations gravitate towards a focus on one or a very few model systems. Each of these will be pursued with a doggedness and an encyclopedic comprehensiveness that cannot be accomplished without the focus. But how do we settle upon which systems will be our model systems? I believe special issues are likely to be part of the answer. For example, in my own case, I was well aware of investigations dealing with sticklebacks. But the special issues brought that awareness to a new level. I began to see more and more of the interlocking, fascinating and general problems that the stickleback crowd manages to engulf. Beautiful. I have no doubt that I would have failed to understand this without the special issues to focus my attention.”
By Andrew Hendry - July 04, 2016