Conflict of Interest: Hilborn vs. Greenpeace and beyond

Conflict of Interest is a critical concept in science. The reason is that science is supposed to be objective and not overtly influenced by outside groups or personal interests – at least not beyond the choice of WHAT to study, which is quite reasonably influenced by both. That is, the type of research done is acceptably subject to personal and outside influence but the conclusions drawn from the research should be independent of both. Thus, whenever funding is provided by a particular interest group, one must disclose that funding source. 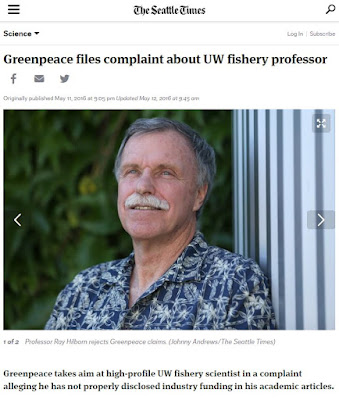 I am motivated to discuss this topic owing to the recent dust-up between Greenpeace and Ray Hilborn, a professor in the University of Washington’s School of Aquatic and Fishery Sciences. Hilborn is a renowned fisheries scientist who has been very influential at all levels across a broad swath of the globe. A recurring theme in Hilborn’s writing is that frequent claims about over-fishing being pervasive and dramatic are exaggerated. He feels – and his research has often shown – that many fisheries around the world are sustainable, with fish populations often even growing, partly because of sound fisheries management. This picture of fisheries is considerably rosier than the one often painted by some other fisheries scientists by the press and by a variety of environmental groups. Moreover, Hilborn does not pull his punches (the expression “he doesn’t suffer fools” comes to mind) when criticizing the doom-and-gloom perspective espoused by many.

Greenpeace feels that overfishing is rampant and that the science supports that conclusion, leading them be at odds with much of Hilborn’s writing. Recently, Greenpeace used the Freedom of Information Act to obtain, from the University of Washington, records of all of Hilborn’s research funding. In a recent online posting, they took Hilborn to task for receiving funding from the fisheries industry but for not always reporting these contributions in his writings about fisheries. They provided some specific examples of papers published in a range of journals – and of articles in the popular press – where Hilborn came to the conclusion (or expressed the opinion) that overfishing concerns were exaggerated; but in which funding from the fisheries industry was not acknowledged. The implication of their article was that Hilborn was somehow influenced by the industry to paint a rosier picture of fishing than was actually the case.

Hilborn defended his record in several ways. First, he provided a pie chart of all of his funding over the period in question, which shows a diversity of sources, including the fishing industry (13% of the total). He suggested it was unclear what sort of bias he was supposed to have given that his research has been supported by government, environmental NGOs, community groups, foundations, the fishing industry, and others. Second, he noted that the accepted practice in science is to report funding sources for the specific work being reported in a given paper, not all sources of funding one has ever received. The latter scenario would obviously be unrealistic as the list of sponsors would be longer than some of the papers. Third, he pointed out that the actual data are not really be questioned, nor are his research methods and approaches. 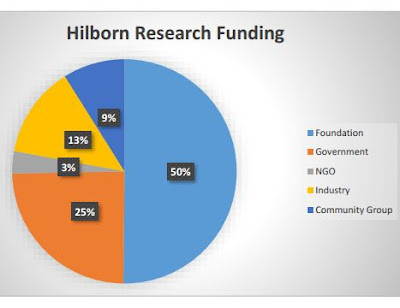 I took a personal interest in this story because I did my PhD and MSc at the University of Washington in their School of Aquatic and Fishery Sciences (then the School of Fisheries). I worked in Alaska for the school’s Alaska Salmon Program, which received some funding from the fisheries industry. More directly, I worked for several summers at a remote field camp in Alaska with Ray Hilborn and his family. Finally, I published two papers with Hilborn based on work done by students with who we both collaborated (Gende et al. 2004 – Oikos; Carlson et al. 2007 – PLoS ONE). Throughout all of this, my experiences with Ray have always been positive, I have the utmost respect for his science, and I have never had any thought that he might be influenced by industry when conduct his science or expressing his opinion. In short, like many other scientists, I am fully in support of Hilborn and his science.

Consider the generally accepted practice of only disclosing funding sources in a paper that are specific to the work being reported in that paper. Now imagine an extreme situation where a particular industry (let’s say tobacco) funds nine out of ten of your papers. The tenth paper is also relevant to that industry (it shows that a particular chemical found in tobacco does not have negative health effects) but it was based on research not directly funded by that industry (perhaps NIH funded it.)  I suspect that a number of people would quite reasonably worry that your tenth paper was influenced by the tobacco industry even if it wasn’t directly funded by it. Thus, I suppose an outsider who doesn’t know Hilborn and his work might feel that not disclosing, in every paper he writes about fishing, that he has received considerable funding from the fishing industry is misleading. Similarly, others might think it misleading if he doesn’t disclose his considerable funding from environmental groups or from government.

Of course, every paper one writes can’t list every specific funding source that one has ever received – it would indeed be too cumbersome. However, it would certainly be easy (and short) to simply list the broad classes of funding sources that one has received, perhaps even overall amounts for each of those sources. Indeed, Hilborn’s pie chart makes clear that he isn’t “in the pocket” of industry or anyone else for that matter – and Hilborn and his colleagues have been using this to great effect. Combine broad-brush historical reporting like this with a listing of the specific funding sources for the research in the specific paper, and you should be covered.

In closing, I doubt very much that Ray Hilborn is influenced by the fishing industry in the conclusions he draws about fishing. I also think that his research is likely to be the most defensible of any out there. At the same time, I can see how outsiders might PERCEIVE a conflict of interest, which might cause some people to think a bias exists. Thus, I suggest that in any situation where people might worry about a conflict of interest in your work, that a sentence be added to the end of your acknowledgements that simply says something like: “Our research programs have been funded by a diversity of sources, including governments, foundations, NGOs, community groups, and industry.”

1. Both of the papers I published with Ray Hilborn acknowledged industry funding. However, none of those papers had anything to do with fishing, and so I doubt anyone would care regardless.

2. I have a long personal and professional relationship with Hilborn, as detailed above. We have also repeatedly talked about working on grants for future work in Alaska. And - perhaps most importantly - I follow his daughter, Anne, on twitter.

3. I have, occasionally, been a dues-paying member of Greenpeace, which I think has done some great (and some not-so-great) work in raising the public’s consciousness about environmental issues.

4. Conflict of Interest is also important to discuss in other aspects of science, such as reviewing and editing - but I do not touch on those aspects here.
By Andrew Hendry - May 17, 2016