Sometimes it’s better to be lucky than good

Identifying the genomic basis of complex, ecologically important phenotypes has become a major obsession among many evolutionary geneticists. Recently, some of the best successes in finding them have been in systems in which strong divergent selection has driven genetic changes at a few significant loci. These situations in the wild are analogous to the strong artificial selection imposed in plant and animal breeding. Certain traits selected for during the domestication process in dogs, for example, are determined by just a few genes of major effect rather than having the more polygenic architecture previously assumed. Similarly, examples of complex phenotypes with simple genetic architectures have been found in studies of wild organisms undergoing recent strong selection, such as those driven by anthropogenic impacts.

One such trait is smoltification, the process through which anadromous fishes mature from their freshwater juvenile rearing habitats into an ocean-going phase to grow to adulthood. This transformation is the epitome of a complex phenotype, involving changes in physiological, morphological, and behavioral traits preceding downstream migration to the ocean. And in some species, including the enigmatic salmonid species Oncorhynchus mykiss, undergoing this transformation is optional—individuals that smolt become ocean-going steelhead, while other individuals remain in freshwater to mature as rainbow trout. Not surprisingly, efforts to use genomic techniques such as GWAS and QTL mapping have identified numerous significant associations, but different studies have produced highly variable results, often identifying completely different chromosomal regions as important in determining individual expression of anadromy.


This brings us to the subject of this post, recent studies in which my colleagues and I took a different approach (Martinez et al. 2011; Pearse et al. 2014). Taking advantage of pairs of wild populations above and below barriers to migration, we reasoned that, from the perspective of the above-barrier populations, selection would be extremely strong to stay above the falls—fish that migrate downstream can’t come back, so any gene that increases the probability of smoltification would rapidly remove itself from the above-barrier populations, never to return. Using a simple Fst-outlier approach, we detected parallel adaptive changes in the allele frequencies at multiple loci in multiple populations, many of which had been isolated above-barrier for just a few decades following introduction or dam construction. These patterns demonstrated that a large genomic region on chromosome Omy5 plays a key role in the evolution and expression of smoltification in nature, and that repeated evolution of the resident freshwater phenotype above-barriers has resulted in a parallel evolutionary genetic response in this region. 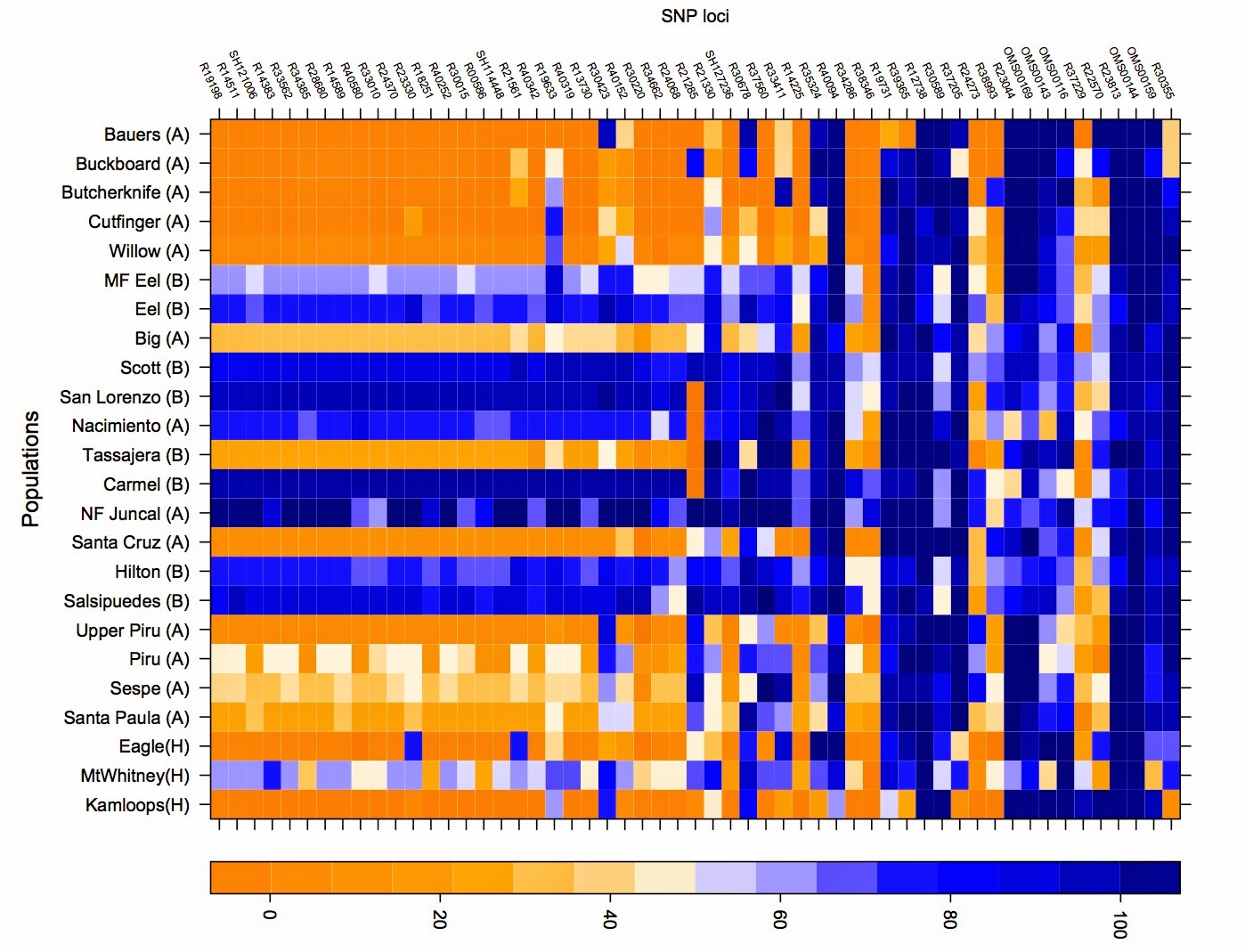 Allele frequencies of 55 SNP loci located on Omy5 in populations above and below barriers to migration. Orange and blue indicate frequencies of alleles associated with resident and anadromous populations, respectively. Loci are ordered left to right based on the strength of linkage disequilibrium between them. (from Pearse et al. 2014).


Given the hard selection in these above-barrier populations against alleles associated with downstream migration, how strong of an effect is required to create these population differences? A simple simulation study illustrates this, and shows that given reasonable population parameters, a fitness differential as small as 5-10% could explain the observed patterns of parallel evolution. Thus, the population-level allele frequency changes we detected, even though they occurred over extremely rapid evolutionary timescales, could be the result of fairly small shifts in individual probability of smoltification. 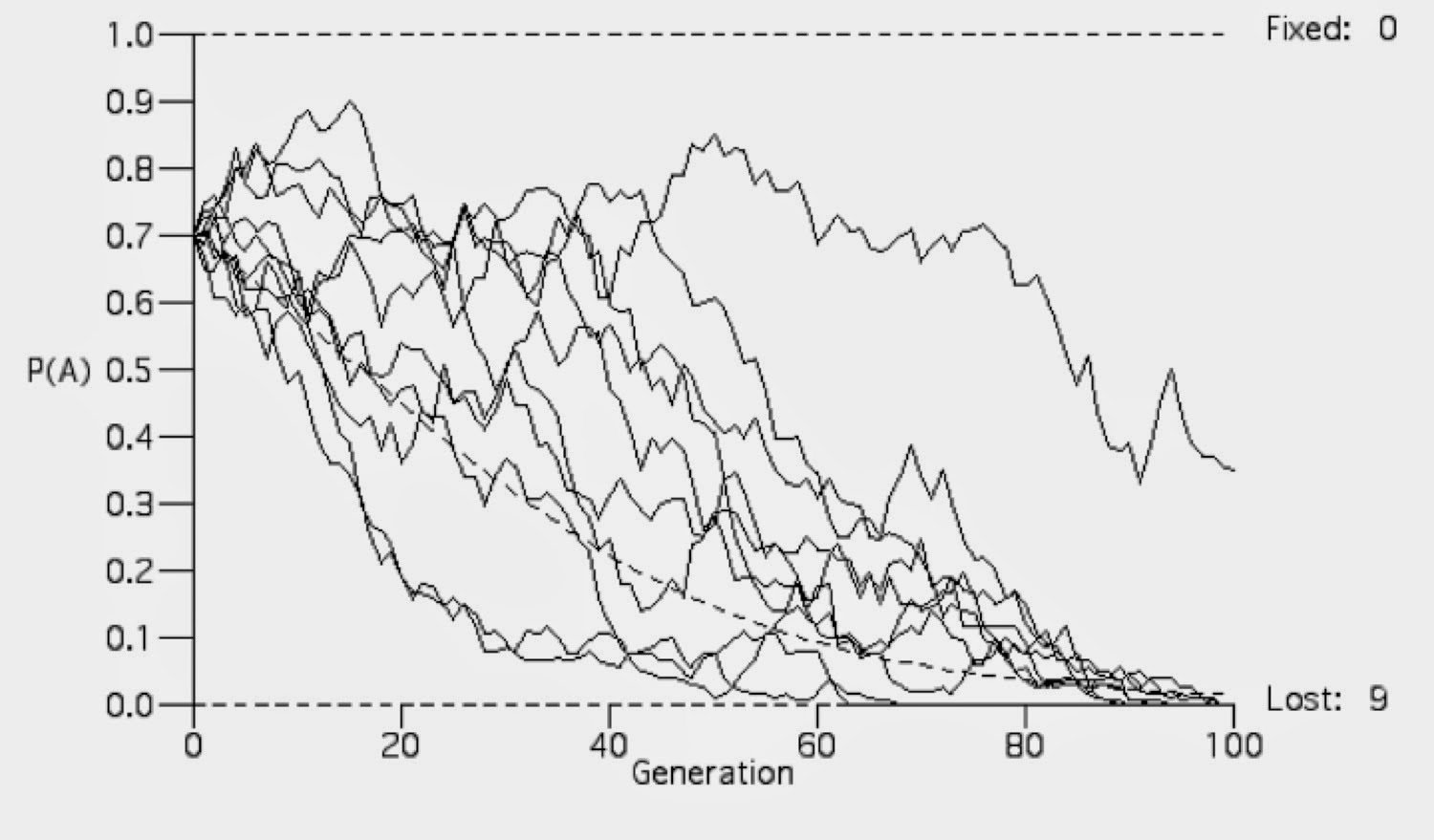 
Regardless of the apparent strength of the association between the Omy5 region and life-history variation in O. mykiss, it is important to remember the fundamental truth of complex phenotypes—they are complex. To use the analogy of playing cards, the hand that is dealt may represent an individual’s genetic makeup, but how it is played has a huge influence on the outcome (phenotype). And, unlike card games, the genetic hand that each individual human, fish, or other organism is dealt is spread across tens of chromosomes, with potentially 100s or 1000s of genes and segregating genomic regions, so it is hardly surprising that such variable associations between phenotype and genotype have been described. Some cards may be more influential than others (an ace might greatly increase an individual’s probability of ‘winning’), while the influence of other cards may depend on the combination of cards dealt—a three of hearts could be very important in a hand with two other 3s or a run of hearts! Finally, evolution may link important genes together through chromosomal inversions or other mechanisms; skewing the odds like a set of aces that are always dealt together, these ‘supergenes’ may combine to exert much greater influence on the phenotype. The long-awaited publication of a genome sequence for O. mykiss (Berthelot et al. 2014, Nature Communications) will greatly facilitate further exploration into the genomic architecture that maintains the linkage block on Omy5.


Moving forward, the challenge is now to determine the extent to which variation in genes associated with phenotypes at the population level influence individual phenotypic expression in nature. Even for single, large-effect regions, such as the one on Omy5, phenotypic plasticity and ecological interactions will have a strong influence on trait expression, much like human genetic information that provides a ‘risk factor’ for an individual patient’s likelihood of developing a given disease. And, as in humans, there may be huge differences in genetic architecture among populations across the range of diverse species in nature. Understanding this variability will be critical to improving both our understanding of the evolutionary genetic basis of complex phenotypes and to efforts to conserve this variation.

(And a tip o’ the hat to Robin Waples for an insightful chat a few years back that greatly encouraged me to pursue this work)
By Ben Haller - July 07, 2014