Darwin jumped on a bandwagon


I was surfing the web and noticed something interesting on Jonathan Davies' home page - rare, I know. I repeat it here with Jonathan's permission.

Darwin jumped on a bandwagon, Mendelian genetics retarded the expansion of evolutionary theory, and the recent resurgence of interest in fruit.

Google’s Ngram viewer (http://books.google.com/ngrams/) provides a fascinating insight into the changing frequency of occurrence of keywords through time, mining the vast information database that is Google Books.

As someone with an interest in ecology and evolution, I thought it might be fun to map their trends. Because I was not sure what biases might exist in the database, I also included what I thought would be a neutral keyword ‘fruit’. 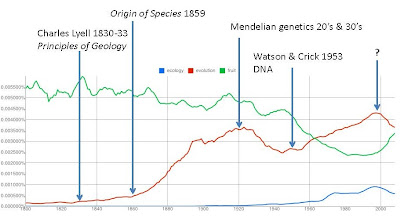 Here is my very non-scientific interpretation of what I found. Evolution is much more popular than ecology, and even overtook fruit in the 1960’s. The rise of evolution predates publication of the Origin of Species, suggesting Darwin jumped on the evolution bandwagon. Mendelian genetics and a better understanding of inheritance temporarily stalled evolution’s growth, which only recovered after Watson & Crick’s publication on the structure of DNA. Evolution continued to gain in popularity up until around 2000, at which point both ecology and evolution decline but there is a resurgence of interest in fruit – just a coincidence?