Darwin in the genome 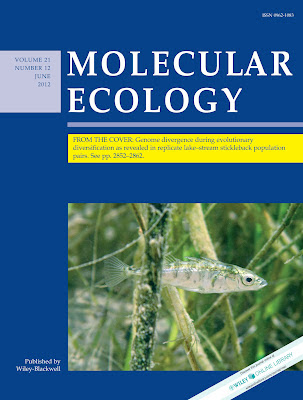 (I am posting a press release from McGill related to a paper that has just officially come out.)

A current controversy raging in evolutionary biology is whether adaptation to new environments is the result of many genes, each of relatively small effect, or just a few genes of large effect. A new study published in Molecular Ecology strongly supports the first "many-small" hypothesis. McGill University professor Andrew Hendry, from the Department of Biology and the Redpath Museum, and evolutionary geneticists at Basel University in Switzerland, studied how threespine stickleback fish adapted to lake and stream environments in British Columbia, Canada.

By examining four independently evolved lake-stream population pairs, the researchers were further able to show that increasing divergence between the populations involved genetic differences that were larger and present at more and more loci.

As these results were obtained using new high-resolution genetic methods, it is conceivable that previous perceptions of adaptation as being a genetically simple process are simply the result of a bias resulting from previous lower-resolution genomic methods.

"I suspect that as more and more studies use these methods, the tide of opinion will swerve strongly to the view that adaptation is a complex process that involves many genes spread across diverse places in the genome," says Prof. Hendry.

A News and Views about the article: