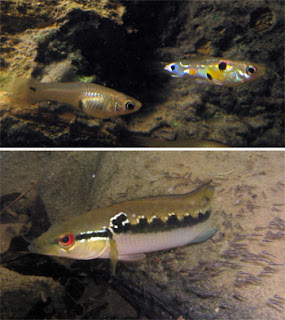 The following is a press release from The American Naturalist.
Darwin argued that the origin of new species is driven by adaptation to different environments and recent research has confirmed his intuition and given the process its current name "ecological speciation". At the same time, it has become increasingly apparent that different environments do not always cause ecological speciation. Some other forces must therefore constrain the evolution of reproductive barriers that irrevocably sunder one species into several. Jacques Labonne of INRA in France and Andrew Hendry of McGill University in Canada investigate one of these constraining forces by developing simulation models of population divergence in Trinidadian guppies.
Trinidadian guppies are caught up in a perpetual tug of war between sex and death. Colorful males are often favored by females during mating (top image), whereas those same males are thought to be more susceptible to predators (bottom image). As a result, guppy populations above waterfalls, which evolve without dangerous predators, often have more colorful males than those below waterfalls evolving with dangerous predators. Given this evidence of adaptation to different environments, the theory of ecological speciation would predict that the two types of guppies (low-predation and high-predation) should be on their way to speciation, which is not the case. Hendry suggests that "maybe colorful low-predation males moving into high-predation populations pay the price of imminent death, but until then, reap the benefits of more sex." The authors' simulation models confirm that the end result of this conflict between sex and death can be little progress toward ecological speciation. This study illustrates the importance of considering multiple factors that promote and constrain progress toward speciation.
For more details see: Labonne, J., and A.P. Hendry. Natural selection can giveth and taketh away reproductive barriers: models of population divergence in guppies. American Naturalist. To be published in July issue.
By Andrew Hendry - May 14, 2010