A Tale of Two Thousand Cities - by Charles Darwin


Cities change everything for the organisms that live in them. Temperature changes. Noise changes. Available habitat changes. Prey changes. Predators change. Food changes. Pollution. Eutrophication. Invasion species. For years, the temptation was simply to write these areas off from the perspective of biodiversity and nature; but – over many years – a shift has occurred to establish a vigorous field of “urban ecology”. The idea is that cities are ecosystems too and we should manage them and their biodiversity as such. And where ecology goes, evolution follows. That is, any sort of environmental change is expected to impose selection on the organisms that remain in that environment, which should lead to evolutionary adaptation to urban environments. This post is about how urbanization dramatically shapes the evolution of many species. I might have called it “Darwin Comes To Town” but Menno Schlithuizen’s forthcoming book has already appropriated that wonderful title.

The past few decades saw a smattering of studies demonstrating evolution in response to urban environments. Byrne et al. (1999) showed that a new form (species?) of mosquitoes had evolved in the London Underground. Cheptou et al. (2008) showed that plants evolved reduced dispersal in cities because dispersers were likely to end up in the in hospitable “concrete matrix.” Following from these earlier, somewhat sparse demonstrations, studies of urban evolution have really heated up recently: cool new papers are coming out, books are being written, grants are under review, symposia are being organized, and working groups are being convened. Inspired by this recent enthusiasm, I want to highlight some of my own work in this area, some of the exciting new work that has come out this year, and some attempts to tie it altogether through meta-analysis.

My own foray into urban evolution started with coincidental discoveries in Darwin’s finches of Galapagos. Up to the 1970s, medium ground finches (Geospiza fortis) at Academy Bay, beside the small town of Puerto Ayora on Santa Cruz Island, were bimodal in beak size: many large or small birds with relatively few intermediates. By the time we started working there in the 2000s, Puerto Ayora had grown dramatically, and the collection of new beak size data did not reveal the same bimodality as in the past. Yet at the same time, we uncovered bimodality at a site (El Garrapatero) well removed from the town where finches were not exposed to urban conditions. Compiling data from 1964 to 2005, we confirmed that beak size bimodality was lost the finches living in and around Puerto Ayora coincident with the dramatic human population increase. We then showed in later work that this collapse of diversity was associated with a degradation of the diet differences that normally differentiate the species. In short, all the finches are now feeding on human foods, which has removed the selection pressures formerly favoring diversification in this group. Indeed, additional work we currently have in review shows that urban finches are actively attracted to humans and their foods, whereas finches outside of the city are not.


Acorn ant colonies are entirely contained within acorns, which is pretty darn cool – and makes for a wonderful experimental system. One can pick up an acorn and move it to a new site, or to the lab, and thereby test for thermal tolerances and local adaptation. And – conveniently for the question at hand – oak trees producing lots of acorns are found both inside and outside cities. Sarah Diamond and colleagues tested whether urban acorn ants had different temperature tolerances than rural ants. Consistent with the “urban heat island” effect (temperatures are higher inside cities than outside), the authors found that city acorn ants had higher thermal tolerances, and that this difference could be attributed to a complementary combination of plasticity (warmer rearing temperatures increased thermal tolerance) and genetic differences (city ants had higher tolerances for a given rearing temperature). But the temperature effects of cities might not always be so straightforward.


One of the most ubiquitous plants in urban environments is clover – as a kid, I spent many hours searching for 4-leafed versions. Clover is also abundant outside cities, and so might be a good model for understanding how evolution proceeds in response to urban conditions. Marc Johnson, Ken Thompson, and colleagues hypothesized that the urban heat island effect should lead to the evolution of reduced freeze tolerance in clover, which is controlled by a known genetic polymorphism for hydrogen cynanide. Surprisingly, they found exactly the opposite – freeze tolerance genotypes were more common inside Toronto than outside. The same result was obtained for New York and for Boston, whereas no pattern was evident for Montreal. After a long trip down the rabbit hole, the authors showed that, because snow cover is less common in cities than without, some cities are actually “urban cold islands” in winter that favor the evolution increased – rather than decreased – cold tolerance in plants. (Montreal has so much snow both in and out of the city than it doesn’t matter.)

The use of multiple urban-nonurban gradients, as above, allows greater insight than only a single gradient. Also this year, Liam Revell, Kristin Winchell, and their collaborators studied Anolis lizards on Puerto Rico, comparing those in three cities to those just outside the cities. In forests, these lizards are commonly found on branches that can be quite narrow, whereas in cities they tend to occur on the much broader substrates of walls. Previous work showed that hindlimb length tends to evolve according to substrate size – being longer on broader substrates. That was just what the authors found here: city lizards have longer legs and a common-garden rearing environment confirmed that at least some of this difference was genetic.


The above examples are just a few studies from this year. Many other studies are also demonstrating trait responses to urbanization, although, in some cases, it isn’t yet clear if the change is genetically based. City birds sing different songs, appear smarter, have different behaviors and stress responses, sometimes have different clutch sizes, and so on. City mice differ in key genes that might reflect adaptation, Daphnia evolve to be smaller in urban ponds, and so on. These wonderful examples of phenotypic changes (at least some evolutionary) in urban environments raise the question: are they exceptional? Humans influence evolution in all sorts of contexts apart from cities (hunting/harvesting, fragmentation, climate change, pollution, eutrophication, invasive species, etc.), as we recently reviewed in a special issue of PTRSB. Are urban environments any different, such as by driving faster rates of change than in other contexts? 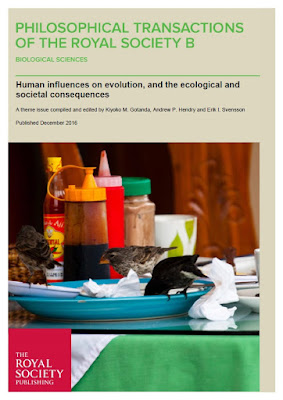 Marina Alberti has led the recent charge in reviewing work on urban evolution and contacted me with an idea to use our database of rates of phenotypic change to quantitatively ask if changes were greater in cities than in “natural” or other human-disturbance contexts. The same database had previously been used to show that – among other things – human disturbances accelerated rates of change, that the most dramatic effects were evident when humans acted as predators, but that evolution was not exceptionally rapid in the context of invasive species. Georeferencing all the observations in this database and linking them to urbanization estimates, the study – a collaboration among many people – showed that adding information on urbanization substantially improved the ability to predict rates of change – a number of which are confirmed to be genetically based. I speculate that the main reason is that urbanization is associated with many forms of environmental change occurring all together (a subset are listed at the outset of this post), which should impose particularly strong and diverse selection on the organisms that persist.


The next time you walk through a city, take a look past the steel, glass, and concrete, to see the plants and animals that live there. (And, of course, to not see all the microbes.) Each of these organisms is experiencing selective pressures that simply didn’t exist in most places until relatively recently. Selection is the engine of evolution and – indeed – many of these organisms have evolved to better suite them for urban conditions. Indeed, some of those organisms might not exist in cities were it not for adaptive evolution keeping pace with increasing urbanization.