Yes, humans influence evolution. Yes, that has consequences for humans!

Well, what might this greatest evolutionary force be? For better or for worse, it's humans. For most of us living in our privileged world with a roof over our heads and food in our stomach, it is easy to become ensconced in our little bubble of consumables and disposables while hiding behind some electronic device, and not think about how we, humans, are affecting evolutionary processes. For example, when something is domesticated for human consumption, be it crops or pets, what happens when those domesticated individuals intermix with wild individuals? What happens when we put antibiotics into the wild? What happens when we want to put taxidermy heads on our walls? What happens when we move something from one place to another, intentionally or by accident (does it matter?)? So, perhaps it's time to come out from behind your screen to think about these questions.

All of these questions are important, but it is not enough to just ask how we are influencing evolution, but to also ask what are the consequences of this? How is this feeding back on to humans and our societies? Well, in working with Andrew Hendry from McGill University and Erik Svensson from Lund University, we set out to agglomerate a special issue of Philosophical Transactions of the Royal Society - B focusing on just this question. We came up with the unimaginative, but descriptive title of "Human Influences on evolution, and the ecological and societal consequences". 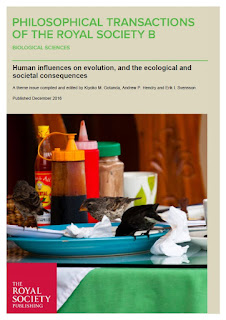 We structured this issue in a slightly different way where we considered individual contexts of human influence as a 'topic'. These topics include things such as domestication, habitat fragmentation, hunting, urbanization, medicine, disease, and more. For most of the topics, we opted to have two manuscripts related to the topic: a review type article, focusing on a particular context, how that affects evolution, and then in turn, how this might affect humans, and an empirical paper that set out to test some of the ideas laid out in the review.

We considered everything within two theoretical frameworks. The first is the phenotypic adaptive landscape, where a three dimensional surface is pictured with the peaks representing high fitness phenotypes and the valleys representing low fitness phenotypes. Selection would then be acting to push a population up the adaptive peak. If that landscape is altered (say by humans introducing a novel predator), however, then the landscape, and thus selection will shift. Eco-evolutionary dynamics would then consider that change in a distribution of phenotypes and how that would affect the ecology of that population, including changes at the community and ecosystem level. 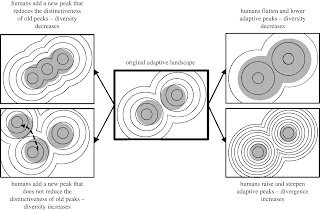 As you can imagine, trying to understand how everything is connected can be rather confusing, so we modified the "traditional" eco-evolutionary framework to incorporate all the different parts together. 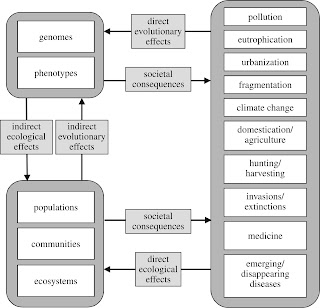 Using this, we then set out to try and predict which human influence might have the strongest effects on evolutionary and ecological processes. By no means is what we've done comprehensive, it's merely a tiny stepping stone to fully comprehending the impacts that we humans are having on evolution and how that is feeding back to human society. One of the reasons making predictions is so difficult is because evolution can be influenced by a myriad of factors. For instance, predicting how invasive organisms will respond, as well as how the native populations will respond, are dependent on so many biotic and abiotic interactions, it's extremely difficult to predict if the invasion will succeed, and if so, what will the consequences of it be and then how that would subsequently affect human populations.

Let's take a look at one of our thoughts about human influences on evolutionary processes. Depending on the context, specific components can affect selection itself, or other components of evolution such as standing genetic variation or as we put it, evolutionary potential. In some contexts,  a strong effect is quite obvious - hunting and harvesting are usually size specific, which will result in evolutionary changes in size. However, the hunting can not persist forever at high rates as the population would eventually go extinct. Perhaps more important is our efforts to control for pests or perceived "enemies" because it will result in increased tolerance and resistance, which then means we need stronger/better ways to control the enemies, and then they will again evolve increased tolerance. This perpetual "arms race" could, and has, led to things like superbugs that cannot be controlled with any current medicine.

What about potential ecological consequences as a result of this human induced evolutionary change? If we again consider hunting and harvesting, perhaps we are reducing the population size of or even removing a keystone species. If certain species are targeted, where individuals have a strong role in the community structure, their removal will have obvious cascading effects. For example, otters are essential in maintaining the giant kelp ecosystem in the Pacific Ocean, and the loss of otters in this ecosystem, perhaps due to pollution, then cascades into human society as important fisheries and a carbon sequestration source are subsequently lost.

In our introductory article, we actually ask a total of eight questions relating to human influences on evolution and the consequences they have on human society. We know you will have opinion and agree or disagree with us, so we would love to hear from you in the comments. In a nutshell, we hope this issue make you realize just how much humans are influencing evolution, and that these human induced shifts in evolution have societal consequences. Unfortunately, a large number of those consequences are detrimental to humans. And we're not alone on this planet, so those negative consequences are also affecting everything else!!