Maladaptation to chemical exposure – what may be happening and where do we go from here?

Industrial, residential, commercial, and agricultural development greatly benefit human populations, but with the unintended and widespread consequence of increasing the release and availability of chemical pollution.  Surface runoff and atmospheric deposition introduce a complex mixture of heavy metals, pesticides, pharmaceuticals, and other contaminants into our water bodies. While some pollutants are regulated in an effort to protect human and environmental health, we have very little knowledge of how pollution exposure affects organisms over the long-term. To effectively manage pollution risk, we need to have a better understanding of these consequences.

Exposure to chemical pollution can have a host of negative effects on organisms, including reduced reproductive output, and at high enough doses, death. Individuals in the wild have been found to vary in their sensitivity to pollution exposure, both within and among populations. Based on these negative effects on individuals and the variation in sensitivity, most evolutionary biologists would likely predict that pollution exposure should select for more tolerant individuals. In other words, populations should be able to adapt to exposure.

This was my hypothesis when I set out to investigate the evolutionary consequences of long-term exposure to heavy metals in Daphnia populations in New England lakes (Rogalski 2017). Daphnia (aka “water fleas”) are tiny crustacean zooplankton that are extremely efficient at grazing algae in lakes but are also pretty sensitive to contaminant exposure. To my surprise, I found the opposite of my predicted trend. Daphnia had evolved to become more sensitive to metal exposure over decades of increasing contamination.

When I first started to see this result, I thought there must be some mistake. However, the pattern was repeated. I saw the same increase in sensitivity to copper following increasing historic exposure in two different populations, and also in response to cadmium in a third population.  In one lake, thirty years after peak copper levels, the sensitivity remained. 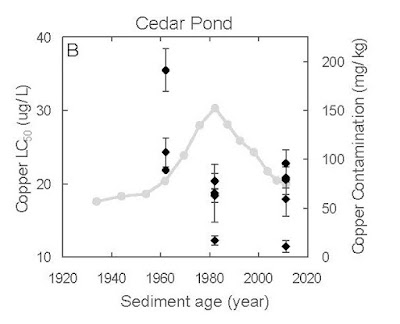 I tried to think of what could explain my unexpected result. Surely adaptation must really be happening here, right? But my study is clearly showing the opposite trend. Perhaps there’s an evolutionary trade off at play? Or some other reason why the populations have not only failed to adapt to metal exposure but also became more sensitive?


While the evolutionary pattern is striking and repeated, at this point I just don’t have enough information to understand the mechanism underlying the pattern. I certainly wouldn’t rule out the possibility that these Daphnia populations are adapting to their changing environmental conditions but just happen to be getting more sensitive to acute copper and cadmium exposure. In particular, I am curious to know if the acute and chronic toxicity responses might be inversely correlated. My assays measured acute toxicity – is it possible that being good at chronic chemical exposure makes a Daphnia worse at dealing with acute exposure? At least one study looked at this question in Daphnia with mixed results, finding no evidence of such a trade-off in response to cadmium, and no obvious pattern in response to copper (Barata et al. 2000).

Yet after having spent a lot of time reflecting on my results, I no longer find the trend so unexpected.
First of all, while maladaptation has received relatively little attention by evolutionary biologists, a metaanalysis by Hereford (2009) suggests that maladaptation happens fairly frequently. Of all reciprocal transplant studies examined in this metaanalysis, Hereford found that local maladaptation (defined as foreign population advantage) happened in 29% of cases. If we see evidence of maladaptation when we expect to see local adaptation nearly a third of the time, my result of increasing sensitivity to metals seems much less unexpected.

My study is not the first evidence of maladaptation to pollution conditions in wild animal populations. Researchers found that barnacles (Balanus amphitrite) in polluted estuarine environments were more sensitive to exposure to an antifouling biocide, copper pyrithione, compared with animals from less polluted conditions (Romano et al. 2010).  Rolshausen et al. (2015) found that Trinidadian guppy (Poecilia reticulate) populations have failed to adapt to crude oil pollution, despite devastating effects of exposure to oil. Also, a PhD student in the lab where I did my dissertation work, Steve Brady, found that wood frog (Rana sylvatica) populations in Connecticut ponds were more sensitive to road side environments in general, and road salt in particular compared with salamanders from forested ponds (Brady 2013). Steve found that there were also some overall fitness consequences of this increasing sensitivity to roadside environments. Interestingly, he found the opposite trend of adaptation to roads and road salt in another amphibian species, spotted salamanders (Ambystoma maculatum), inhabiting the exact same ponds (Brady 2012).

In addition, just because pollution can have fitness consequences, I don’t think we should expect chemical exposure to act like other forces of selection such as predation, parasitism, or changing temperatures. Pollution exposure can also lead to increasing rates of developmental malformations, cause changes in sex ratios, and cause cancer. Some pollutants can bioaccumulate in tissues, including those of offspring. When the cadmium chloride that I had ordered for my toxicity trials arrived in the mail, the hazards listed on the safety sheet sounded pretty scary. In particular, cadmium exposure “may cause heritable genetic damage”. The other metal I studied, copper, has been linked with increasing mutation rates in exposed Daphnia populations. It’s not hard to imagine how some of these toxicological impacts could have accumulating consequences over the course of many generations of exposure.

One thing that is valuable about my study is that it tracks evolution through time. While local adaptation studies have provided valuable insight into how populations have evolved in response to contaminant exposure, we are missing three critical pieces of information. 1) We don’t know how pollution conditions have changed in the past in a given habitat. We can only compare organisms in polluted and unpolluted conditions; 2) we don’t know what the historical evolutionary trajectories of these populations look like; and, 3) in most cases the phenotypic responses that we observe may include genetic, plastic, epigenetic, and/or maternal effects.

In my study, I was able to address these issues. I used lake sediment archives to track both environmental and evolutionary trajectories over time. I measured metal contaminants in dated sediments to put together the history of exposure experienced by these populations over the past century. I hatched Daphnia from resting egg banks buried in sediments from high and low metal time periods. I then tested these Daphnia for sensitivity to copper or cadmium to see if the populations had evolved in their tolerance for these stressors. Since we can raise Daphnia clonally in the lab I was able to minimize any maternal effects that might have been present.


In closing, I’ve come away with two key points from this study. First, maladaptation appears to be fairly common but our theoretical understanding of why it happens is pretty limited. This leaves us trying to explain seemingly counterintuitive results with a bit of hand waving and throwing around terms like “genetic drift”, “trade offs”, and “dispersal rates”. As evolutionary biologists we need to do more to understand what drivers may lead to maladaptation to improve our ability to both explain and predict evolutionary trends. Second, if species as different as Daphnia, barnacles, and wood frogs are becoming maladapted to pollution, we should think critically about the risk associated with multi-generational pollution exposure. How common is maladaptation to pollution exposure, and how does this affect the ability of organisms to adapt to other stressors? In what contexts might we expect to see adaptation vs. maladaptation to a contaminant? Could pollution exposure be having long-term damaging impacts on human populations? Those who oppose pollution regulation focus on the financial costs today, but the cost of inadequate pollution control for humans and other species could be much greater over the long-term.