A few years back, Marius Roesti and I started to work extensively on the genomics of adaptive divergence between lake and stream stickleback population pairs from Canada, using genome-wide marker data sets generated by restriction site-associated DNA sequencing (RADseq). Based on this first genomics experience (see http://onlinelibrary.wiley.com/doi/10.1111/j.1365-294X.2012.05509.x/abstract), we agreed that there were two main aspects we wanted to improve in subsequent population genomic investigations. First, we felt that higher marker resolution was needed, because our initial RADseq resolution (based on the standard Sbf1 restriction enzyme) seemed to capture the molecular consequences of divergent selection only on a relatively crude scale. Second, we imagined that insights into parallelism in the genomic basis of adaptive divergence would be easier to obtain by investigating a study system exhibiting parallel evolution at a smaller and thus more clear-cut geographic scale. With these ideas in mind, we decided to start an investigation on lake and stream stickleback within a single watershed, the Lake Constance basin in Central Europe (Fig. A), using higher-resolution RAD methodology. We considered three populations from well-separated inlet creeks to Lake Constance (one of Europe's largest lakes), as well as the lake population itself sampled at two distant sites. The latter proved to be panmictic, so in the end we believed we were dealing with three stream populations, each diverged independently and in parallel from a shared lake ancestor. 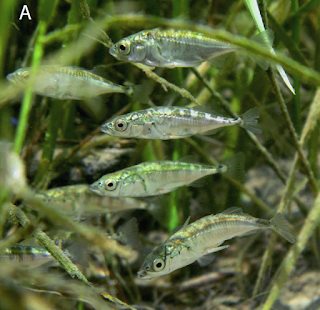 Fig. B. Ecological vicariance leading to apparent parallel evolution. This process is initiated by multiple habitats becoming colonized by a shared ancestor (in our case a stream-adapted population) (top panel). Next, the connectivity among populations becomes constrained as the core population adapts to its ecologically distinct habitat (in our case the lake; the peripheral circles are stream habitats) (middle). Nevertheless, this ecologically-based reproductive isolation is not complete, allowing for introgression across habitat boundaries (bottom). Depending on asymmetries in population sizes, this introgression might primarily affect the peripheral populations. In our case, the result is variation among multiple stream populations in the magnitude of erosion of the ancestral state (shown by gray shades), mimicking variable progress in parallel evolution among the stream populations.


Hence, the Lake Constance system is appropriate for investigating divergent selection, but inappropriate for studying parallel evolution, because the stream fish (initially considered derived) reflect, to a greater or lesser extent, an ancestral state pre-dating the emergence of the derived lake population. What we learned from this work is that caution is warranted when developing evolutionary narratives in genomics; assumptions should be tested, requiring the combination of extensive analyses including those of haplotype structure around selected loci. If you are interested (there is additional stuff on adaptive chromosomal inversions), check out The genomics of ecological vicariance in threespine stickleback fish.