I have been marching through “How To” posts in a somewhat sequential (by career state) order, and I intended to next write a third one on “How To Get a Faculty Position.” However, events have conspired to cause me to write an out-of-order post that I had been planning to get to eventually.

This year, at the request of the Awards Committee in our Biology Department, I applied for McGill University’s Principal’s Prize for Excellence in Teaching. Having been chair of the awards committee in the past, I knew how hard it was to convince people to apply for awards, and so I agreed to do so even though I had little expectation of success. I prepared an extensive dossier, collated quantitative and qualitative student comments and ratings, requested letters from past students, and so on. Then, some six months ago, I sent the application off to the university and promptly forgot about it. Amazingly, just a month or so ago, I started to get emails congratulating me on receiving the award. I was quite surprised to have gotten the award as I know that many other professors at McGill are excellent teachers.

Then came invitations from a number of offices at McGill to attend the Fall graduation ceremonies at which the award would be given. As I am on sabbatical in California, however, I had to decline. Just this last Friday, however, I got another request from The McGill Reporter to provide information for an article about the award winners. The request was for me to answer by email a series of questions including the following:

How would you describe your teaching style?
What are your strengths as a teacher? Weaknesses?
What are the biggest challenges of teaching? And the greatest rewards?
What are the most important qualities a teacher should have?
Any advice for students thinking about becoming teachers?

Rather than doing a quick and inefficient job of answering the questions, it made more sense to simply write the post about “How To Teach” that I had intended to do anyway. So here we go – a bit out of order in the “How To” series but suitably timed in other respects (the award is to be presented tomorrow, Nov. 10). For the below points, I have borrowed heavily from the teaching dossier that I originally submitted as my application for the award, which is why it is even more self-referential than previous post.

My approach to teaching is centered on the integration of two goals: to challenge students and to inspire their interest in the subject. Perhaps we could call this “inspiration-based teaching” so as to starkly contrast it with classical “information-based” teaching. Information-based teaching fails because most students quickly forget detailed information, no matter how good the teacher. Little long term value thus results from cramming students full of facts, formulae, and figures. This information is, after all, freely available online all the time. (Of course, CONCEPTS can be critical.) It is much more important to challenge and inspire students with an engaging and inspiring narrative. I implement this inspiration-based teaching model through several key elements.

Hands-on learning even in huge classes. Instead of using only images and text on slides to illustrate concepts, I bring the REAL THINGS to every class no matter its size – the examples below come mainly from Introductory Biology, which can have over 600 students. Every lecture is accompanied by multiple physical objects. In one lecture, I brought in a gorilla and human skeleton – no small feat as the former is very heavy. In another, I brought in a measuring tape and spread it out across the entire width of the room to illustrate in a concrete way just how big an 18 m whale shark really is. I even brought in two live snakes, which the students loved (the image shows students clustered at the front of the room after class to see the snakes). In student comments, appreciation of these hands-on opportunities was repeatedly expressed, and here are some edited examples.

I really enjoy seeing some tangible objects, ie skulls of polar bears, snakes, etc.
In the first lecture he actually pulled out a tape measure and showed us how long a shark was, which was really interesting! Also he has this stuffed animal that's a fish, and he used it to explain the different parts of the fish which was really cool.
In addition, in today's lecture he brought out two skeletons of different species of primates. The Gorilla, and the homo sapien. We were able to see first hand the structural differences between the two, and how they affected the way of life of both species.
I loved that he always had something to add to the lecture. He brought in snakes for the reptile section, a fake penguin for the birds lecture and did the drunk dance for the evolution section. Terrific!
love the in-class demos
I love how he bring in objects to show the class (eg. Platypus, gorilla skeleton.
I really appreciated all the material he brought to the lectures.
i enjoyed how he brought in other props for his lectures.

Teaching as performance. I try to make my lectures into performances, perhaps a legacy of my interest in performing arts as a high school student. As the most overt and concrete example, I use a tongue-in-cheek “interpretive dance” to weave all of the evolutionary mechanisms into a single metaphor based on the “Drunkard’s Walk.” If only a single item could be used to encapsulate my teaching, this video would be it. I did the performance in multiple classes for more than 10 years before finally videotaping it and posting it on youtube November last year (2014). In less than a year, it has been viewed 1653 times and a number of other profs had said they either show the video in class or do their own version (of course, the latter is much more fun for students to watch). Numerous students have said to me years later that this was the most memorable lecture of their entire university experience.

Integrate with research. It is sometimes argued that, at universities, teaching and research are two solitudes, or simply that time invested in one trades-off with  time that can be invested in the other. To some extent these sentiments are true. However, at the least, integrating your own research into lectures helps students see how the material you are discussing is directly relevant to current research at the university. And, of course, lecturers tend to be more passionate and excited when talking about their own research, which the students can really tell. In addition to this approach, I suggest two other routes. First, integrate the published research of other undergraduates at your university into your lectures. I think undergrads are inspired toward both teaching and research when they see the research that has been conducted by the undergrads who came before them. That is, people sitting in the very room where they are now sitting conducted research that is now being used to educate students only a few years later. Second, try when possible to incorporate a research project into the class and, when feasible, encourage students to work toward publishing the projects. For instance, I teach an upper level undergrad-graduate class that has, as one its core elements, the preparation of a meta-analysis (or other project) with an eye toward publication. I have taught the course five times and students (including some undergrads) have thus far (Nov. 8, 2015) published a total of 11 papers that have been cited a total of 693 times. Perhaps it is a bit absurd for a class to have an H-index but so far it would be 9. The point isn’t that this is a great class, merely that teaching and research can work together to mutual gain.

Engage social media. The current generation of university students gets much of its information through social media and professors would do well to embrace this technology. Before and after lectures, I tweet relevant topics (#biol111: see examples above) for students, and at least 50 students in the class were immediate “followers.” I have also generated educational videos, including The Adaptive Radiation of Darwin’s Finches (6,793 views this year) and Wooly Bear Caterpillar Cocoon Time Lapse (10,306 views this year). In comments, students repeatedly pointed to these activities as enhancing their appreciation of the course and their “connectivity” with the professor. I have yet to make any social media activities compulsory or testable, and instead use them to connect with the students who are really genuinely interested in the topic.

Those are the main elements that I use to form a reasonably successful and useful teaching approach, and I think they will work well in most disciplines and at most universities. However, I don’t assert that this is the only good way to teach, or that even that it is the best way to teach. I am merely outlining one way to teach that students do respond well to in many instances. In reality, I think the key is to be excited and passionate about what you teach, regardless of the specifics of how you teach. Students can tell when you think what you are discussing is cool and they respond well to it. Thus, I guess the key bit of advice that is universally helpful might be, at its essence: HAVE FUN!


Previous "How to" posts

The Spine of the Stickleback

How an first-year undergrad drove more than 15,000 km to brave mosquitoes and forest fires en route to photographing, fin clipping, and rele... 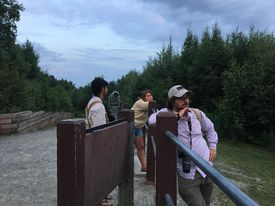