Retracing the legacy of guppy introductions past: local differentiation maintained despite high and rapid gene flow

When populations adapted to different environments come into contact through range expansions, invasions, or by human-assisted migration, the outcome is often unknown. How will immigrant individuals fare in the new environment and will they hybridize with native populations? If so, what impact does gene flow with non-native individuals have on the local populations? The question of whether gene flow between adaptively divergent populations promotes or constrains local adaptation is a long-standing puzzle in evolutionary biology and is increasingly relevant for designing effective conservation strategies.

In our recent study (Fitzpatrick et al., 2015) published in Ecology Letters, we turned to Trinidadian guppies, a model system for studying evolution in the wild, to ask questions about how gene flow affects fitness and local adaptation. The guppy system has proved powerful for understanding a diverse set of questions in ecology and evolution, but these rapidly evolving freshwater fish are perhaps most famous for the series of transplant experiments conducted in the streams of Trinidad. Caryl Haskins initiated the first introduction experiment in 1957, moving guppies from an environment where they experienced high mortality from predation to a site in a separate drainage where waterfall barriers limited the upstream colonization of most fish, including predators and native guppies. The introduction site thus represents a release from predation. John Endler and David Reznick and his colleagues have since repeated this transplant scenario in multiple independent drainages, and their studies of rapid adaptation and eco-evo feedbacks focusing on the introduced populations are iconic in evolutionary ecology.

In each of these introduction streams, native guppies existed downstream from introduction sites, and although the introduced populations were initially maladapted to their new environment, gene flow is expected because adaptive divergence has not led to reproductive isolation in guppies (Crispo et al., 2006). In fact, we expected much higher levels of downstream gene flow from introduction sites than what is observed in natural streams due to the fast life history of the introduced fish and female preference for novel males (Fig. 1; click to see at larger size). 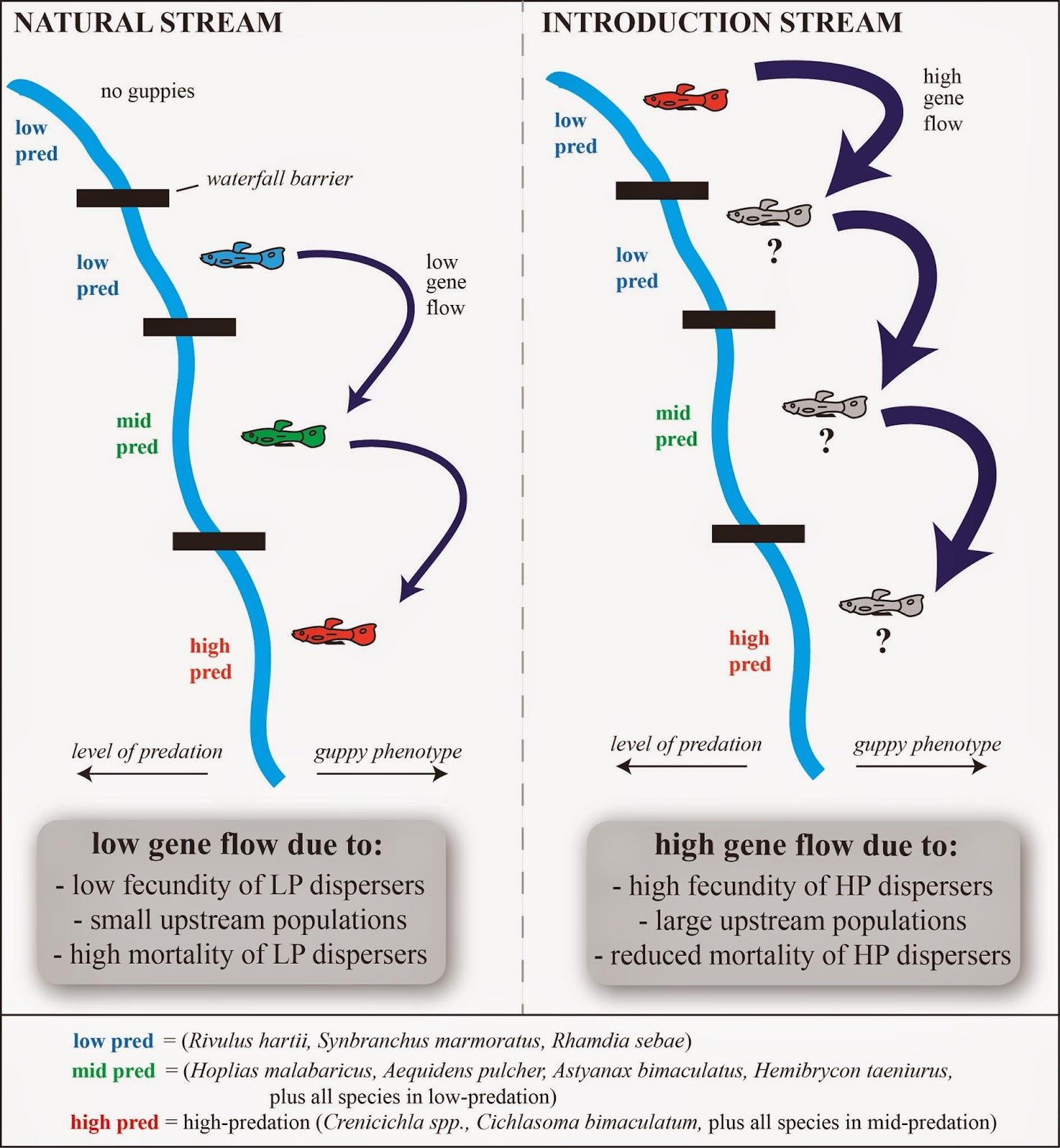 Figure 1. Conceptual diagram illustrating the expected differences in amount of gene flow between natural streams and streams with introduced populations. In both hypothetical streams, predation level is colour-coded based on the species listed in the bottom key, and increases in the downstream direction. Black rectangles indicate waterfall barriers that limit upstream fish dispersal. The colour of fish indicates traits matched to a certain level of predation (e.g., the blue fish has traits that are adaptive in a low-predation environment). In the hypothetical natural stream, fish are perfectly matched to their level of predation and gene flow among populations is low, based on biological factors listed in the grey box. In the hypothetical introduction stream, guppies from high-predation (HP) environments were translocated upstream of naturally occurring low-predation (LP) populations. Gene flow is expected to increase relative to natural levels for the reasons listed in the grey box, and the effect of elevated gene flow on locally adapted traits remains unknown (indicated by grey fish and question marks).

Our team, from Colorado State University, asked what the effects of elevated levels of gene flow from an initially phenotypically divergent population would be on locally adapted phenotypes in downstream populations. Following the footsteps of Haskins, Endler, and Reznick, we sampled guppies from six historic introduction sites, from each of their source populations, and from multiple sites downstream from each introduction. We genotyped all individuals at ten microsatellite loci and quantified a suite of known fitness-related traits, such as male color, body shape, and some female life-history traits that tend to differ based on the level of predation experienced. We also included individuals from two native populations prior to the onset of gene flow, providing a powerful opportunity to compare pre- versus post-gene flow phenotypes and allele frequencies. At each site we classified the predator community as either low, medium, or high based on the complexity of the fish community observed. 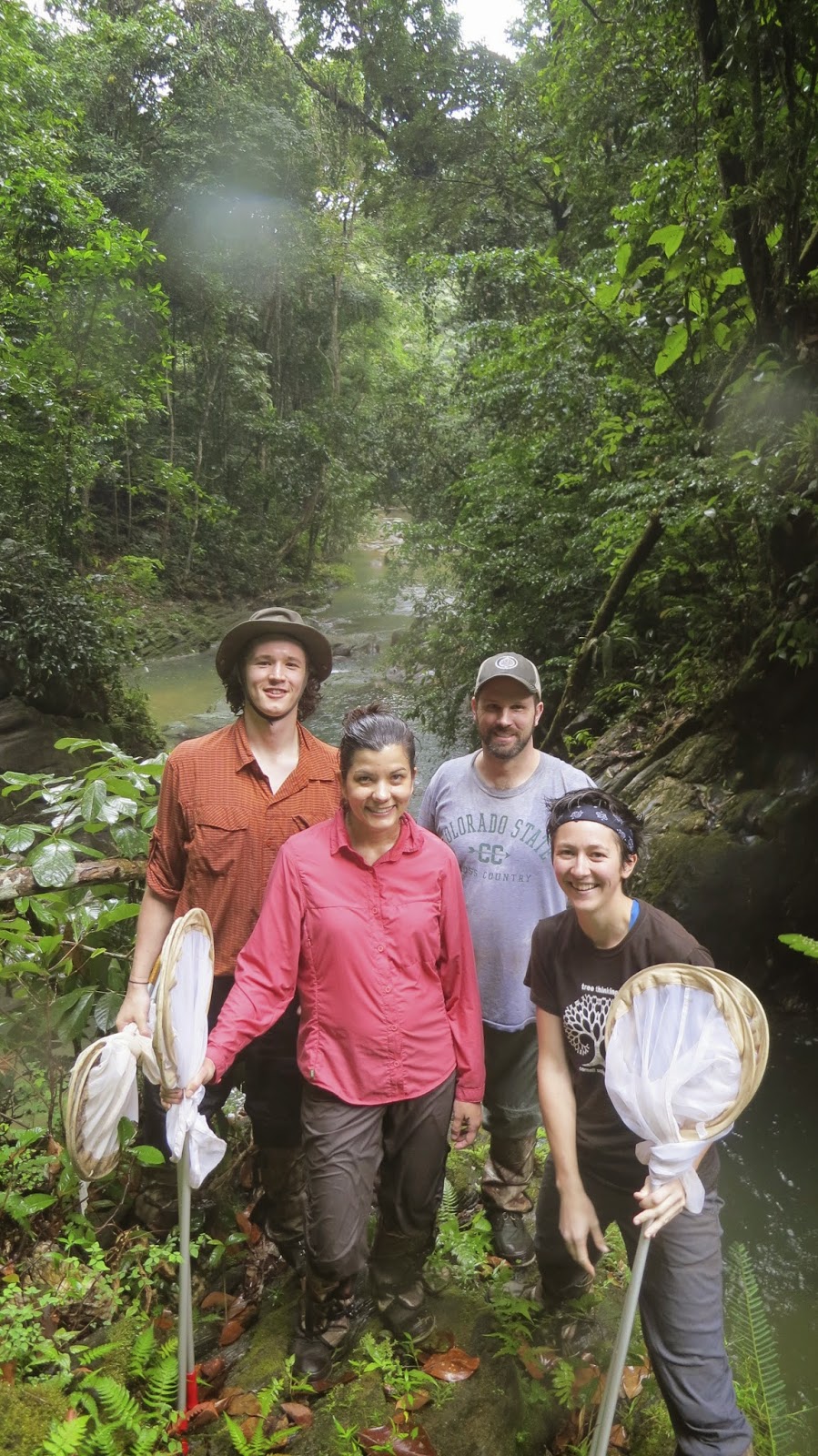 
We found that the genetic signature of introduced guppies swept throughout all downstream distances, indicating high levels of gene flow downstream from all introduction sites on a rapid timescale (Fig. 3a; click to see at larger size). However, despite genetic uniformity caused by introductions, guppies sampled from different predation communities along the streams maintained phenotypic traits that best allowed them to survive and reproduce, given the local predator community. In other words, genetic homogenization did not cause the loss of locally adapted phenotypes. 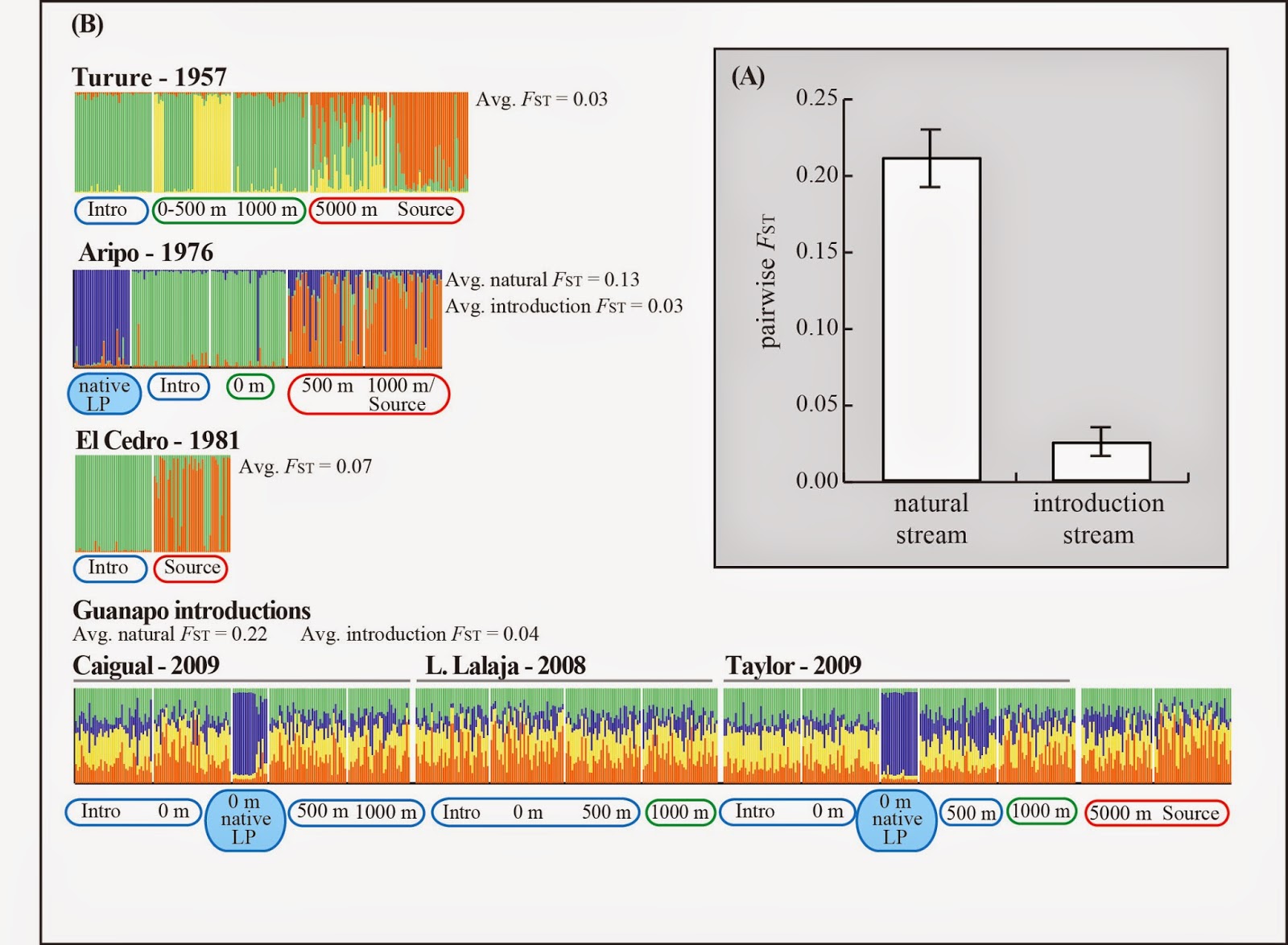 Figure 3. (a) Comparison of genetic differentiation (pairwise-FST) among all sites in natural streams vs. among all sites in streams after introductions took place. (b) Within-stream STRUCTURE plots and average pairwise-FST values for all six streams that experienced an upstream introduction. Each line in the plots corresponds to an individual with colours representing the proportion of an individual’s genotype assigned to a given genetic cluster. Old introductions show fine-scale genetic structure despite low genetic divergence (low FST). All sites from the three recent introductions conducted in the Guanapo drainage were included in the same analysis because they share the 5000 m and source sites. These recent introductions are more genetically homogeneous, with the exception of pre-introduction 0 m sites in Taylor and Caigual (shaded in blue) that are very distinct and genetically divergent (high FST) from the rest of the sites. Colored circles on the x axes indicate the predation level at each site: blue = low, green = mid, red = high, as defined in Fig. 1. All plots represent the (k) number of genetic clusters with the highest support (see Appendix S1).


We used the exchangeability analysis described in Hendry et al. 2013 to compare neutral genetic and phenotypic exchangeability among the common source site and two native low-predation sites that were sampled before and approximately 12 generations after gene flow. A major take-home message from our study can be gained from the results of this analysis. Namely, we found phenotypic divergence associated with the local predation regime despite neutral genetic homogeneity with the source of the introductions (Fig. 5; click to see at larger size). 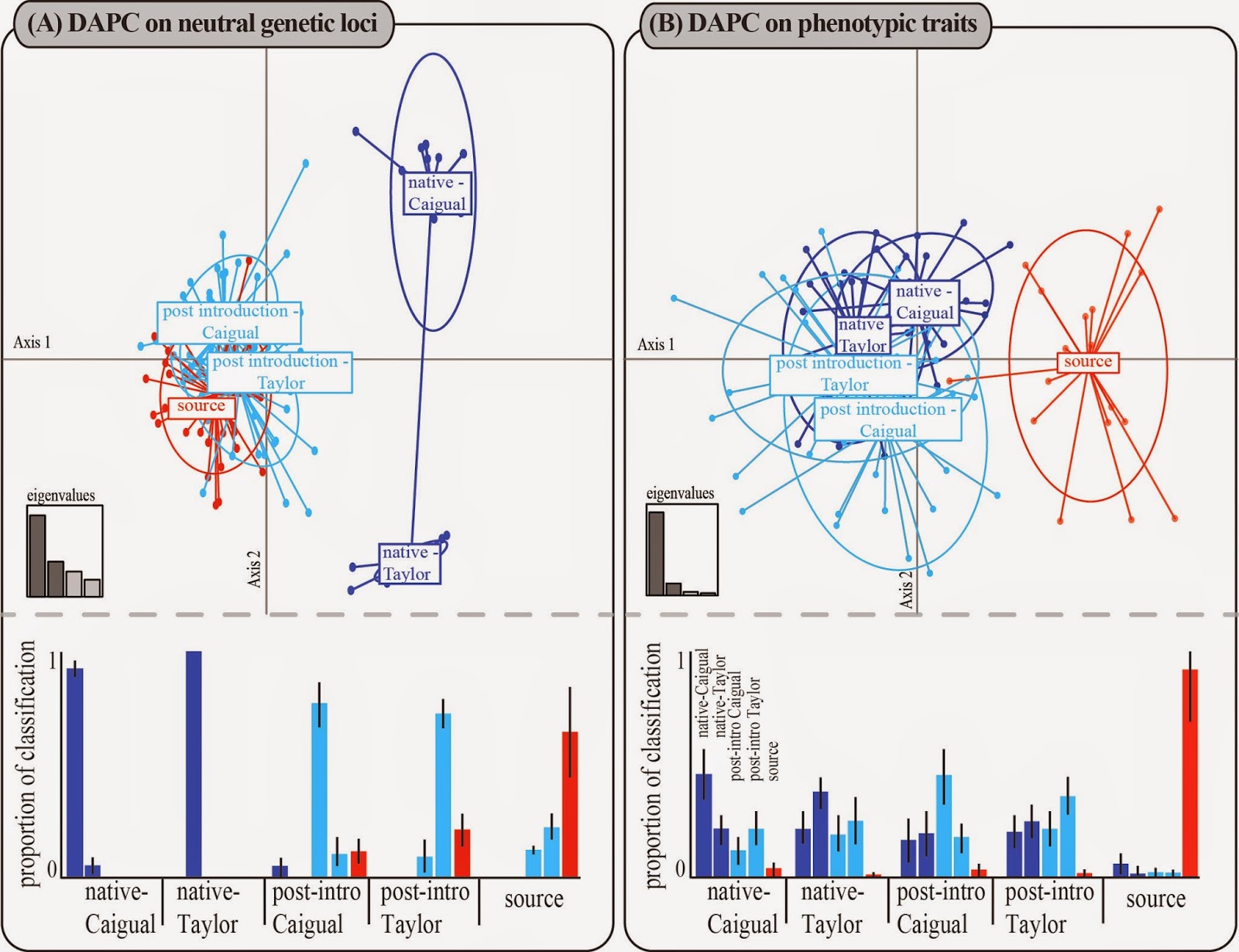 Figure 5. Ordination plots and group classification based on discriminant analysis of principal components (DAPC) for neutral genetic loci (a) and phenotypic traits (b). Colours correspond to a priori groups based on population origin: native low-predation in purple, the same sites post-introduction in blue, and introduction source in red. Bar graphs below the dashed line show the mean (and 95% CIs) proportion of individuals from each population classified into each population. Each bar represents the classification of the population on the x axis, as labelled for one set of bars in (b). The bottom-left insets show eigenvalues of the four principal components in relative magnitude.

Phenotypes were measured from wild fish, so we are unable to separate the relative roles that phenotypic plasticity and adaptive evolution play in causing the observed phenotypic divergence, but we argue that both processes are likely involved. Ongoing work that includes common garden assays conducted before and several generations after the onset of gene flow, and wild pedigree reconstruction throughout the initial pulse and longer-term wave of gene flow, will add to our understanding of the mechanisms by which gene flow impacts adaptive evolution and population growth.

Although we expected to find high gene flow from the introduced populations, we were surprised by the near-extinction of native alleles, especially downstream from the set of recent introductions. However, differential rates of introgression across the genome may result in homogenizing effects of gene flow at neutral loci, while locally adapted native loci or genomic regions are maintained by selection.

Whether the loss of native genetic signatures at neutral loci represents a true detriment is an intriguing philosophical debate. The costs of gene flow between populations of the same species may be outweighed by the benefits in cases where selection for a local ecotype is strong, or where recipient populations are inbred. This study reveals how model systems that can be manipulated in the wild have the potential to inform smart management decisions for threatened populations.

Indeed, we have pioneers of model systems like Haskins, Endler, and Reznick to thank for building foundations that continue to generate creative questions and provide a deeper understanding of nature.

Figures are cited based on the numbering in the manuscript.
By Ben Haller - December 11, 2014