Alaska contains roughly half of the wilderness in the United States. That’s over 230,000 square kilometers of pristine habitat – a place where ecosystem processes disrupted almost everywhere else can be observed in a natural state. Of course, that also means a large proportion of the state isn’t accessible by road, a fact I could barely comprehend as a brand-new grad student stepping off a plane from the East Coast. I soon found myself getting used to travelling exclusively by boat, keeping an eye peeled for bears and moose, and tying a decent bowline (that last trick learned only after the shameful loss of a Secchi disk to the deep). What I’ll never get used to is the thing that brought me there in the first place: gravelly streams full of bright red, desperately spawning salmon. 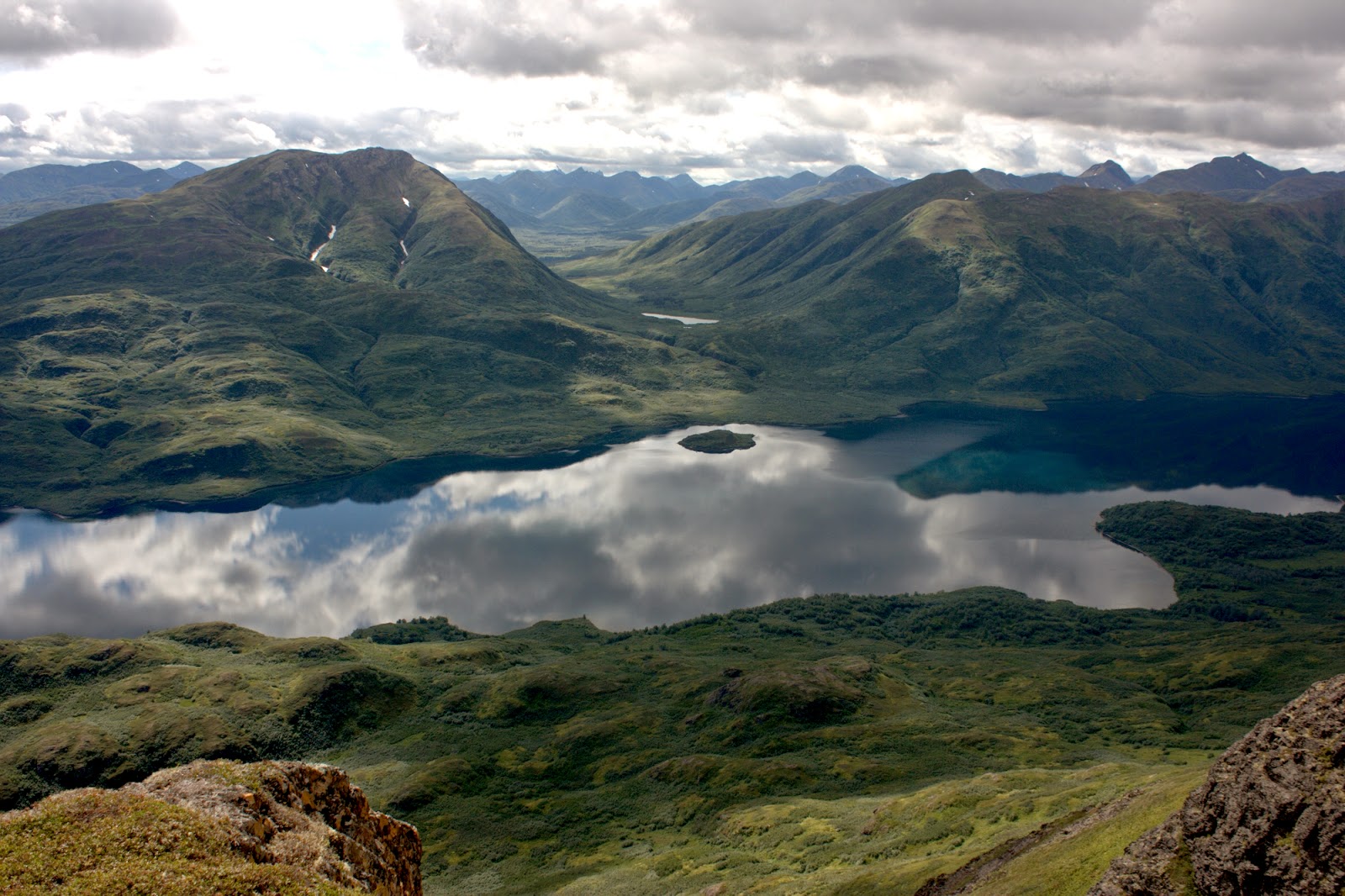 
The Alaska Salmon Program at the University of Washington has been doing research in the Bristol Bay region since 1946, well before Alaska became a state. One major focus of our work has been understanding the ecological effects of habitat diversity on Alaskan salmon stocks, now one of the world’s best examples of a productive and sustainable fishery. Hilborn et al. 2003 showed that the Bristol Bay sockeye salmon (Oncorhynchus nerka) are relatively stable in abundance and resilient to shifts in climate conditions because they are not one gigantic, panmictic population, but instead a metapopulation of independent breeding aggregations adapted to unique spawning habitat types (streams, rivers, and lake beaches). But how do these populations that are adapted to different habitats interact with each other on an evolutionary time scale? Are they on the road to speciation or does gene flow limit their divergence and possibly their adaptation to local conditions?

Despite the famous ability of pacific salmon to home to their natal spawning grounds after years in the ocean, dispersal rates among nearby populations have been measured to be 2–10%, potentially high enough to swamp the effects of ecologically divergent selection. However, even in the presence of considerable dispersal, gene flow may be limited if dispersers have low reproductive success in already-occupied habitats. Where local adaptation has arisen, dispersers between populations occupying distinct habitat types might be maladapted to their new habitat compared to philopatric (non-dispersing) individuals and dispersers between similar habitats, reducing gene flow and reinforcing local adaptation.

We set out to empirically assess the effect of local adaptation on the reproductive success of dispersers between beach- and stream-adapted populations. Beach-spawning fish, especially males, tend to be large and deep-bodied, while stream-spawning fish are more slender. Differences between these ecotypes have also been observed in other ecologically important traits such as egg size and migration timing. In order to isolate the fitness effects of local adaptation from those of dispersal itself, we compared the reproductive success of dispersers between populations that shared the same spawning habitat type with dispersers between ecologically distinct spawning habitat types. 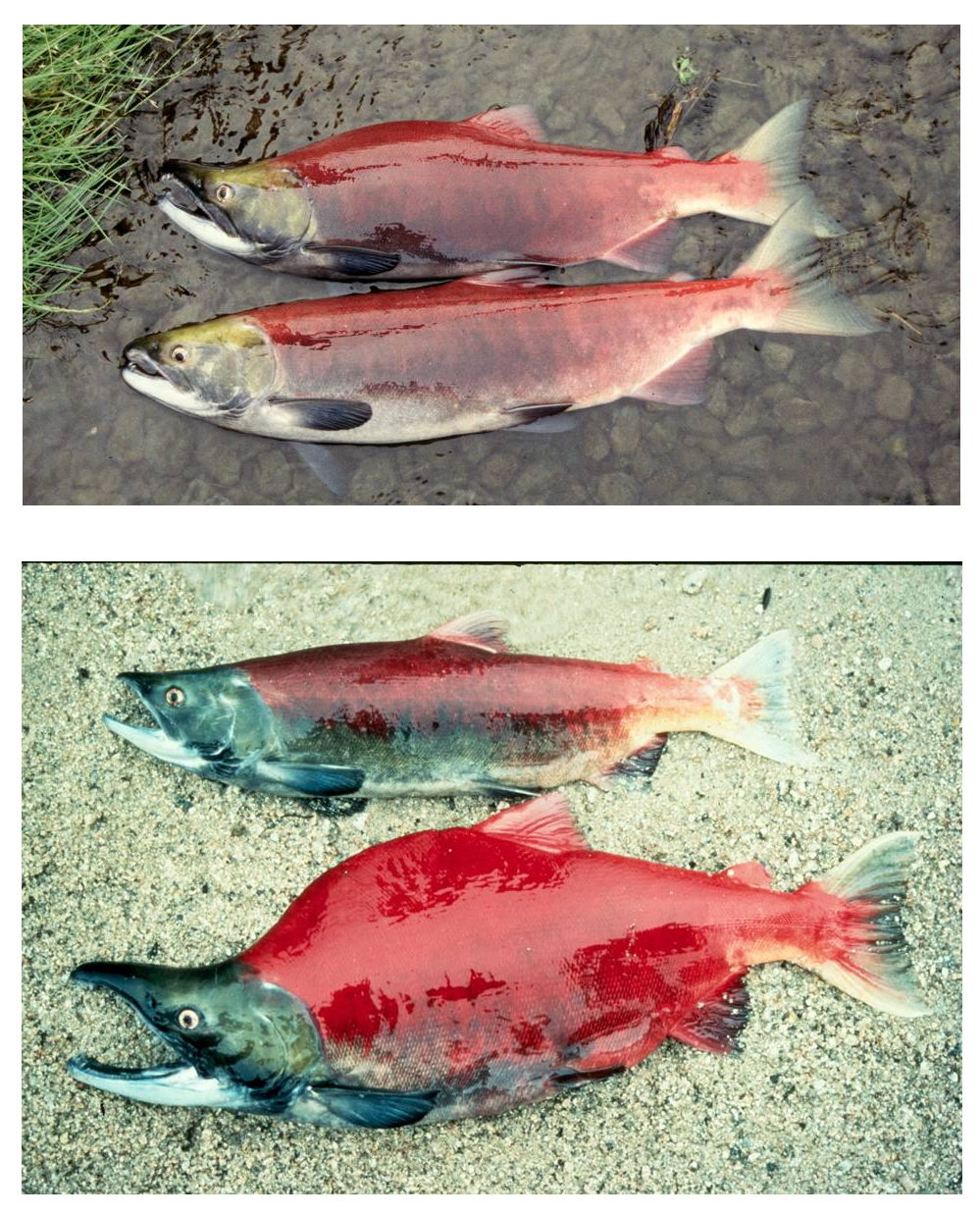 
To get direct measurements of individual dispersal and reproduction, we conducted exhaustive sampling of adults in two stream-spawning populations (A and C Creeks) every year from 2004 through 2010. We walked the full length of both streams every day during the spawning season (late July through late August), tagging any newly observed fish with unique IDs and noting the location of each previously tagged fish. We observed and fin-clipped a total of 4473 individuals in A Creek and C Creek in 2004 and 2005 (the parent years) and 2008, 2009, and 2010 (the years their offspring returned), plus 166 individuals that settled on the beach habitat in 2004 and 2005 (as a genetic baseline with which to identify dispersers from the beach to the streams). In the two parent years, 12% of sampled fish were immigrants (fish genetically assigned to a population other than the one in which they were sampled). C Creek had more immigrants from the other stream as well as from the beach than A Creek, but there was no clear sex bias in dispersing individuals. The number of individuals immigrating to the streams from the beach-spawning populations (N=108) was greater than the number of dispersers between stream-spawning populations (N=85). 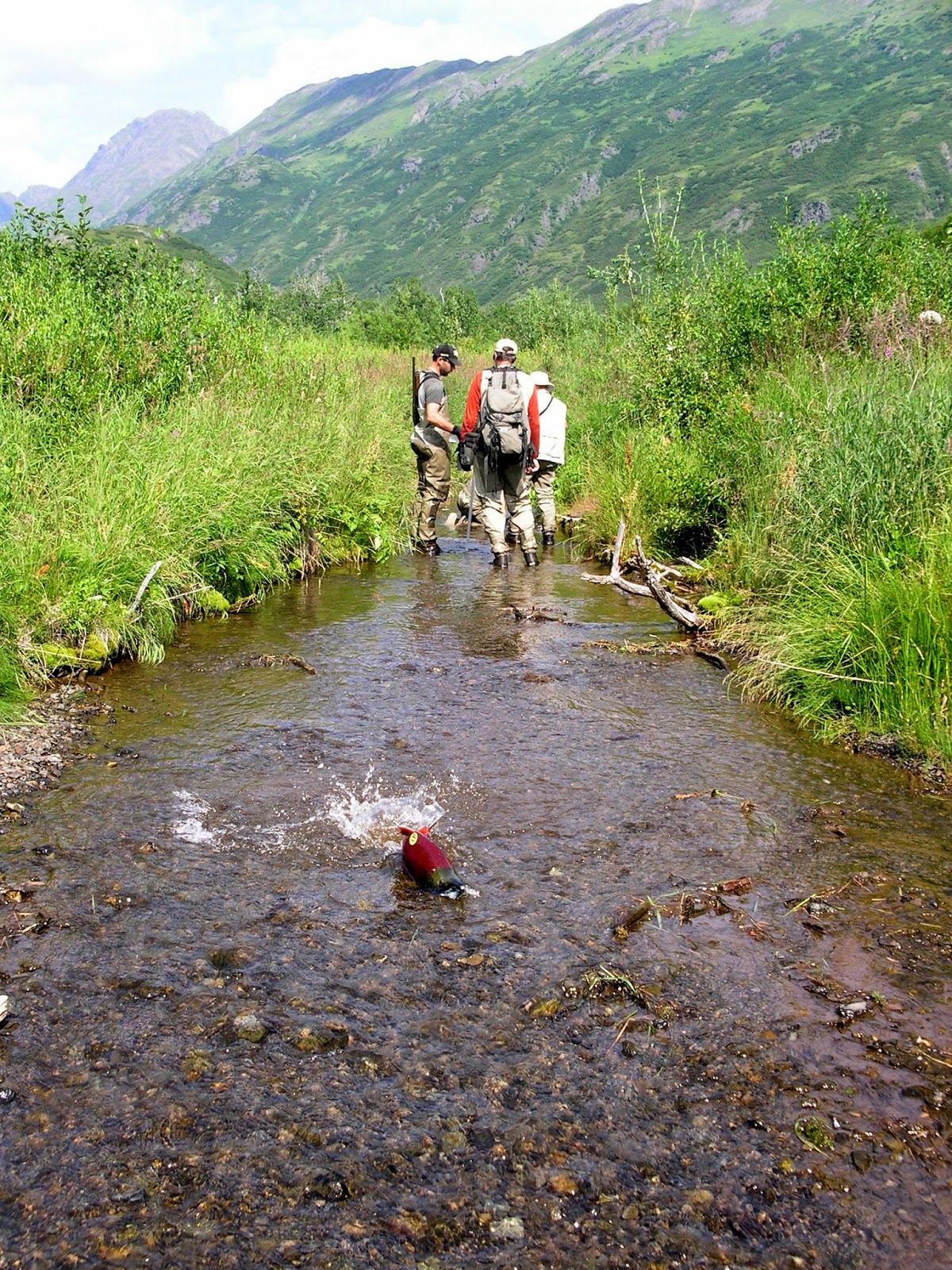 We don’t know the mechanistic reasons why dispersers from the beach produced fewer offspring. Morphological maladaptation to the stream environment could have limited the reproductive success of beach-adapted immigrants by reducing adult lifespan during the spawning period through selective bear predation or stranding in shallow water. Previous studies have shown that the abundant brown and black bears preferentially kill larger salmon (thereby selecting against them), but we found that dispersers from the beach were less likely to be found dead after being killed by bears and more likely to disappear without a trace. Recent PIT tagging work by Bentley et al. has shown that stream-spawning sockeye salmon show a wide variety of movement strategies, with many fish moving between stream and lake on a daily basis. It may be that the mere presence of bears indirectly affects the reproductive success of large-bodied dispersers by eliciting predator avoidance behavior and thereby limiting reproductive opportunity. Alternatively, reduced physical access to shallower areas of the stream could limit access to mates and spawning sites, encouraging the departure of larger individuals. Either way, adaptive behavioral differences between ecotypes may influence the conversion of dispersal into gene flow. 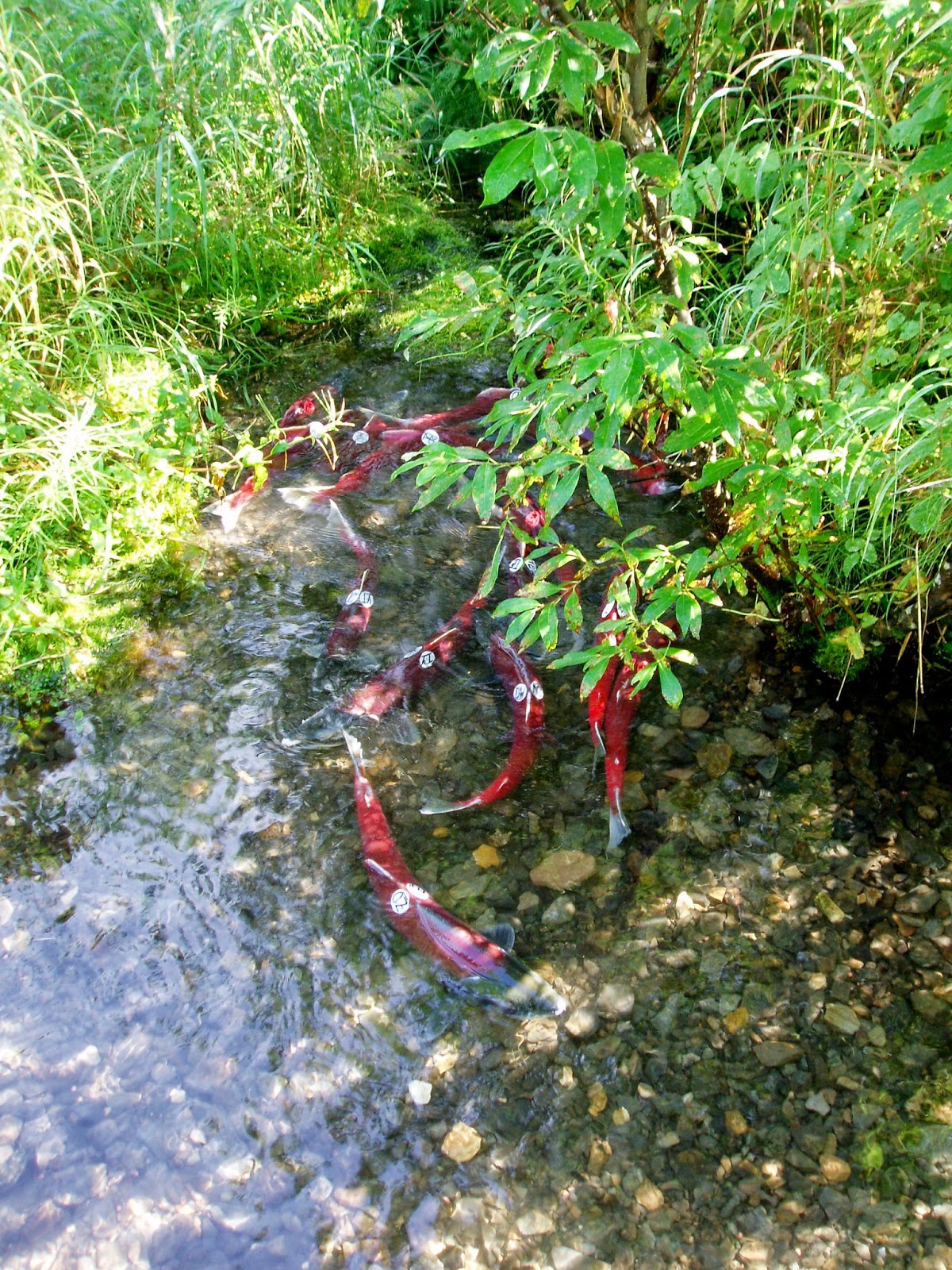 We usually expect that genetic differentiation, adaptive or otherwise, will only develop when diverging populations are insulated from gene flow by barriers to dispersal (either intrinsic or extrinsic). In our study, beach-to-stream dispersers were more prevalent than between-stream dispersers, suggesting that barriers to dispersal between habitat types are not strong in this system. The high fitness cost to dispersers that move between habitats might therefore be crucial to the maintenance of these morphologically and genetically recognizable stream- and beach-spawning ecotypes.

In the long term, we might expect that when dispersers have low reproductive success, selection will drive the evolution of intrinsic barriers to dispersal. However, additional factors might select against such barriers. For example, in dynamic metapopulations, rare subpopulation recolonization events might substantially bolster the long-term fitness of dispersal alleles even if dispersers have limited reproductive success in occupied subpopulations. Moreover, flexible behavior patterns in systems that allow for reversal of dispersal decisions could minimize the fitness cost of dispersal in unfavorable conditions. Thus, in many metapopulations, reduced immigrant reproductive success might be more important than barriers to dispersal for the maintenance of intraspecific biodiversity.