A small mammal with an outsized impact

When we think of species having large and disproportionate impacts on communities, animals like sea otters come to mind. By eating and depleting sea urchins, sea otters prevent urchins from eating and depleting kelp. The huge difference between having kelp forests and their diverse community of fishes, sea lions, and eagles, versus largely kelp-less barrens arises simply from contemporary ecological processes; otters directly eating urchins and indirectly facilitating the increase in kelp. Such cascading effects are thought to be widespread both on land and in sea where you have strongly interacting species like mammals. Remove the mammals and the world is different. Unfortunately, we humans are very good at that.

Although less appreciated, strongly interacting predators and herbivores potentially have strong evolutionary effects on their prey. And, in the case in which the prey dominate a landscape, such evolutionary effects could be just as profound as those found for the more commonly studied trophic cascades of otters and their like. Our research indicates that Rocky Mountain lodgepole pine (Pinus contorta ssp. latifolia), which dominates tens of millions of hectares across the northern Rocky Mountains, is one such dominant species. The evolutionary effect is the result of differential seed predation by the aptly named pine squirrel (Tamiasciurus hudsonicus, also referred to as the American red squirrel; Talluto and Benkman 2014 Proceedings of the National Academy of Sciences USA 111:9543-9548; see also our 2013 paper in Ecology 94:1307-1316). 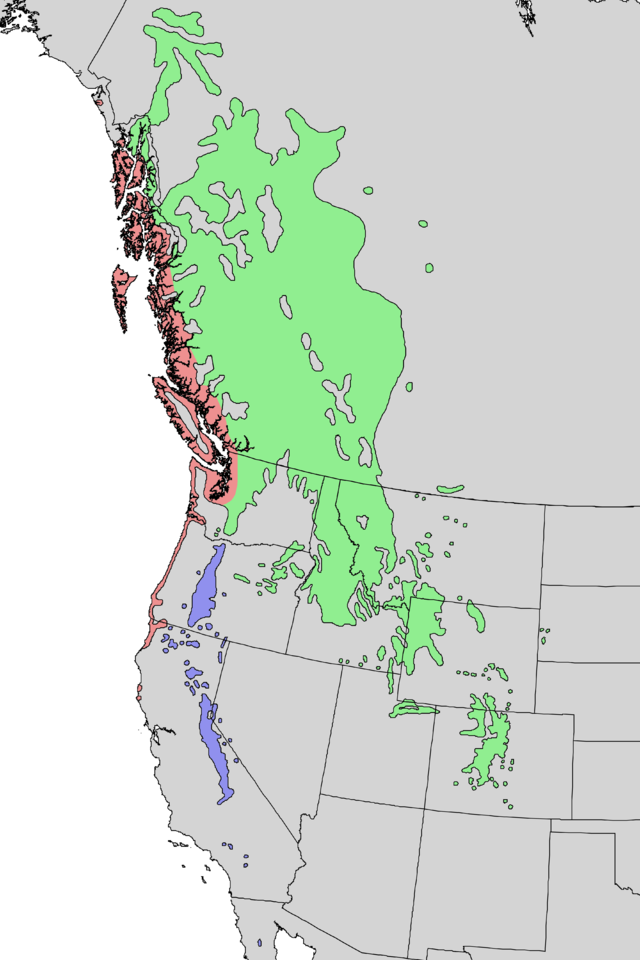 
Driving across Yellowstone and other Rocky Mountain locales, one is struck by the variation in lodgepole pine seedling and sapling densities in areas recovering from fire. This variation has obvious consequences for the structure of plant communities varying from sparse pine seedlings and domination by various grasses and forbs to dense growth of pines with little else. Other components of the communities such as the various animal communities (e.g., birds, mammals, and invertebrate pollinators) must also vary accordingly. 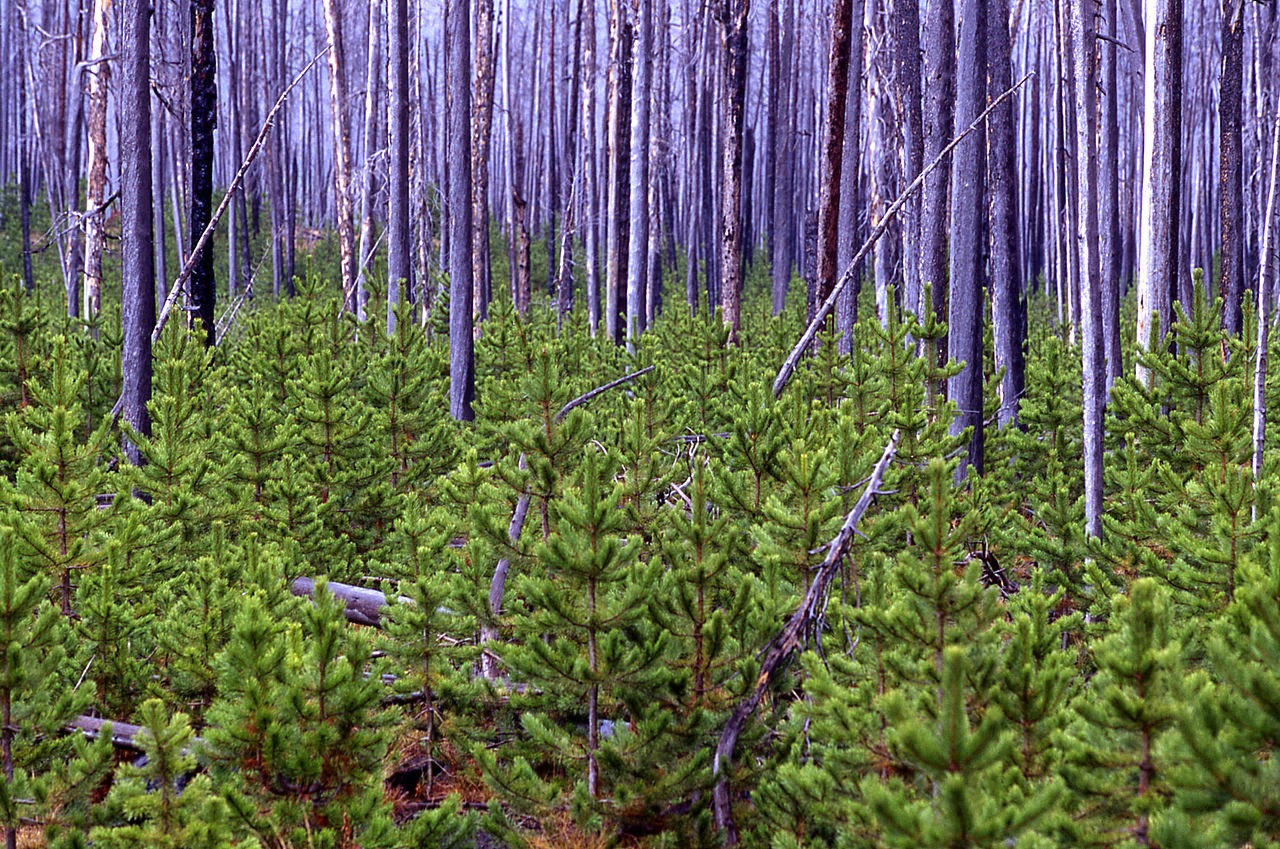 A dense carpet of lodgepole pine saplings several years after a fire. (Photo from Wikipedia)


The key question is what causes the variation in the initial pine seedling density following fire. Ecosystem and landscape ecologists Monica Turner, Dan Tinker, and their colleagues found that the best predictor of seedling density after the 1988 Yellowstone fires was the frequency of serotiny in the pre-fire forest (Turner et al. 2003, Frontiers in Ecology and the Environment 1:351-358). Serotiny occurs when woody plants in fire-prone habitat encase their seeds for multiple years in woody structures (hard woody cones in lodgepole pine) creating an arboreal seed bank that is released soon after a stand-replacing fire. When the frequency of serotiny among the pines is high, large numbers of seeds are released from serotinous cones after fire sweeps through, resulting in large numbers of seedlings. Lower frequencies of serotiny result in fewer seeds available after the fire and many fewer seedlings. Turner, Tinker and colleagues found that the density of seedlings per hectare ranged from 600 when less than one percent of the trees were serotinous to 211,000 when 65% of the trees were serotinous. These remarkable differences resulted in dramatic differences in nutrient flows and how the communities developed after a fire. 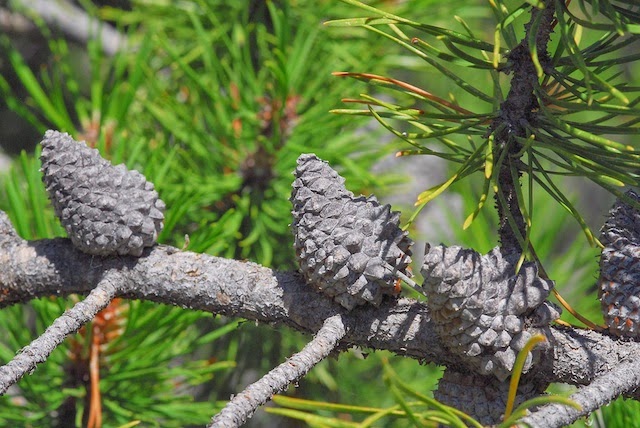 Serotinous lodgepole pine cones remain closed with seeds secured inside for years until the heat from a fire causes the scales to open and shed their seeds. These cones are over 5 years old. (C. Benkman photo) 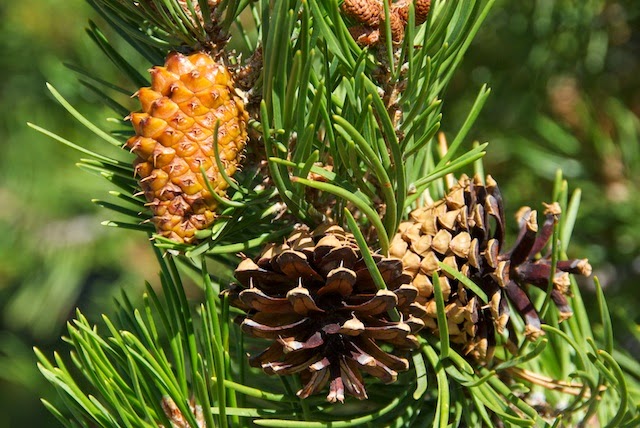 
Traditionally, forest ecologists have focused on variation in the frequency of fire to account for variation in the occurrence of serotiny. More frequent fires favor higher frequencies of serotiny, and observations, including those contrasting low and high elevations in Yellowstone, support such a relationship. However, the variation in serotiny mentioned above occurs in the lower-elevation lodgepole pine forests of Yellowstone where fire frequency is rather high and where one might expect the frequency of serotiny to be uniformly high if fire alone was the main selective agent driving the occurrence of serotiny.

This is where pine squirrels come in. Theoretically, a seed predator could select against serotiny by preferentially preying on seeds in the serotinous cones and thereby depleting the arboreal seed bank. Pine squirrels are such a predator. Both females and males defend separate territories year-round where they harvest, cache, and defend thousands of closed cones with seeds secured within. Because serotinous cones remain closed and hold their seeds for years if not decades, seeds in serotinous cones remain vulnerable to squirrels for years. In contrast, squirrels harvest non-serotinous cones almost exclusively during the several weeks between seed maturation and scale opening and seed shedding in autumn. Consequently, the overall probability of a squirrel harvesting a given serotinous cone is about 100 times higher than that for a non-serotinous cone. Depending on the density of squirrels, this can result in extremely strong selection against serotiny. Indeed, our models taking into account the life histories of the pines, differential seed predation, and fire frequency show that when squirrel densities exceed one and a half squirrels per hectare, selection by squirrels against serotiny overwhelms countering selection by fire favoring serotiny. At lower squirrel densities the balance between selection by squirrels and fire should set the frequency of serotiny. 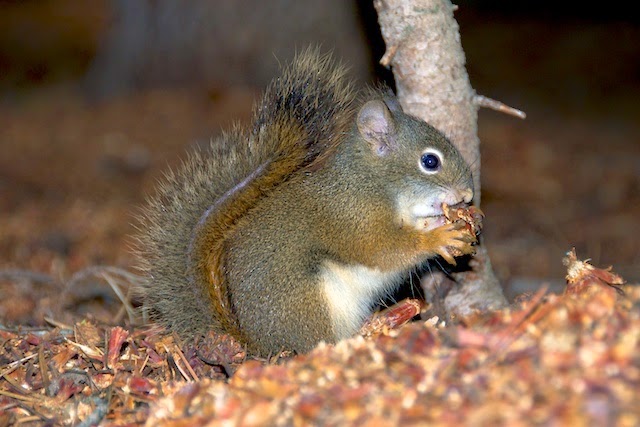 Pine squirrel biting off the overlapping scales of a lodgepole pine cone to reach the underlying seeds. (C. Benkman photo)

Much of the variation in the frequency of serotiny, therefore, represents the outcome of two conflicting selection agents, one abiotic, fire, and one biotic, differential seed predation by pine squirrels. Importantly, at high enough squirrel densities the selection they exert overwhelms selection from even high frequencies of fire favoring serotiny. The balance of these conflicting selective agents in turn influences the density of seedlings after a fire with huge community and ecosystem consequences. Because serotiny is a genetically based trait with 11 “loci” accounting for over 50 percent of the variation in the trait (Parchman et al. 2012 Molecular Ecology 21:2991-3005), we can begin to link “genes” to ecosystems over vast expanses of the Rocky Mountains where lodgepole pine dominates the landscape, all mediated by the two main conflicting selection agents. In short, a small squirrel has an evolutionary impact with outsized ecological consequences.
By Ben Haller - July 10, 2014