Typically, when considering patterns of selection, we estimate selection by considering a trait under selection and a fitness measure. However, there are logistical problems with this. For example, what’s the best way to measure fitness? Survival? Sure, but if you don’t reproduce, is survival then a good estimate of fitness? Fecundity? Great, but what if none of your offspring make it to maturity – is fecundity then a good estimate of fitness? As you can see, quantifying fitness can be difficult, especially in nature.

So what’s an evolutionary biologist to do? How about considering the consequences of selection? If selection is ‘doing its job,’ then we should see changes in the trait under selection, right? If there is selection for larger body size within a population, then we would expect that population to evolve toward an increased mean body size. So, instead of trying to estimate selection, what if we looked at the phenotypic trait that is purportedly under selection? This might be handy because (1) quantifying a phenotypic trait through time is easier than trying to accurately estimate fitness in natural populations, (2) we can consider the importance of temporal variation in selection, because if selection is acting on a trait, and that selection is varying, then it’s reasonable to think that the trait would also vary through time, and (3) compare temporal variation to spatial variation to get a sense of the relative importance of variation in time and space. Thus, we decided to go out and measure spatiotemporal variation in an adaptive phenotypic trait.

First, we needed a system where we have some a priori knowledge about selection and adaptive traits. If we wandered into a random system and quantify a phenotypic trait, we would have no idea if that particular trait was an adaptive trait, nor if and where selection was acting, etc. We’re pretty lucky that there are now several systems we can choose from in which we know that adaptive traits are under selection; the system we chose is male colouration in the Trinidadian guppy system. For those unfamiliar with the guppy system, I refer you to our previous posts here, here, here, and here.

So we trudged through the gorgeous rainforests of northern Trinidad, caught guppies, and photographed them. We sampled ~20 male guppies annually for six years at six different sites within two rivers. Within the Marianne River, we selected two high-predation (HP) sites and two low-predation (LP) sites, and within the Paria River, we selected two sites, both LP. Male guppies were photographed, and then I (with the help of several audiobooks) quantified their colour patterns from the digital photographs.

So what did we find? Not surprisingly, LP sites had more colour than HP sites. I know, you can stifle your yawns: no surprise there. Are you surprised? Here's some background information on why it's not a surprise. Two things about this were interesting, though. First, everyone assumed guppy colour was relatively temporally stable since the HP/LP colour divergence has been demonstrated many times. However, nobody has actually assessed colour annually for several years! If you take a quick peak below, there was some temporal variation, but the LP sites, with two exceptions, basically had more colour than HP sites for six years. The second thing to consider is that there are many potential sources of temporal variation in male guppy colour such as seasonal flooding, variation in parasite loads, and variation in predator composition and density. We don't see any evidence of that here, but this might be due to sampling at the annual level. If we sampled several times a year, we might find a different story. This is a perfect excuse for more trips to Trinidad! 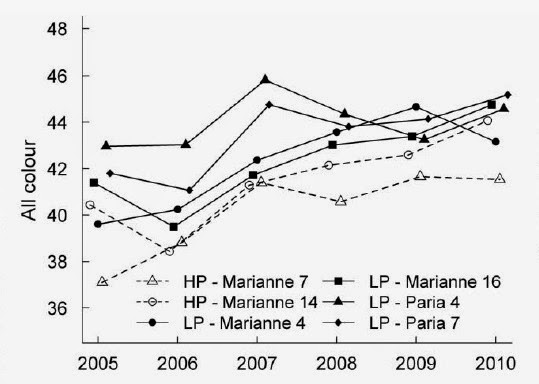 Second, one of the LP sites achieved high colour differently than other sites, and that pattern is relatively consistent through time. Take a look above. The solid, black lines are LP sites, and the dashed lines are HP sites. So, above, you see most of the solid lines above the dashed lines, meaning all the LP sites generally have more colour (carotenoid, structural and melanins) than the HP sites. Now take a look below at graph only showing carotenoid (orange and yellows) colours. You can see one set of the solid, black lines hanging out with  two dashed lines.you've for an LP site hanging out with the HP sites in terms of carotenoid colours.  In other words, one of these LP sites (which happens to be called M16) and HP fish do not have a lot of orange colouration compared to the three other LP sites. 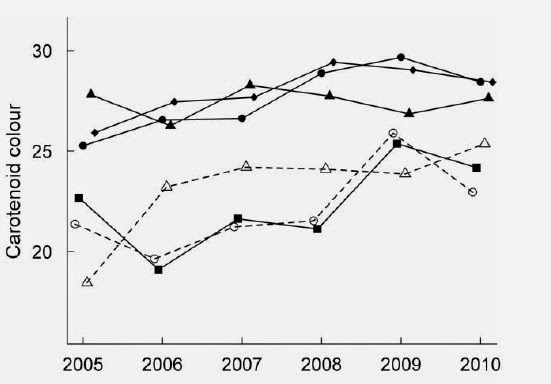 Now check out the structural (violet, silver, and blue) colour graph below. Again, one of the solid black lines seems to be hanging with the dashed line. That solid line happens to be M16 (legend in first graph above) again!  So one LP site (M16) and HP fish have more structural colouration than three other LP sites. So this one LP site (M16) has lots of colour, but unlike the other LP sites, achieved more total colour with more structural colouration and less carotenoid colouration. This pattern holds over six years, so it seems like whatever is happening at M16 isn’t going to be changing anytime soon… 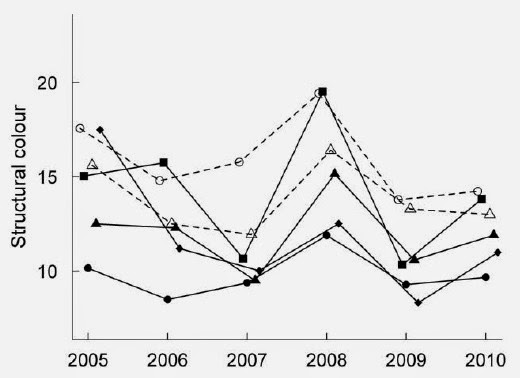