We all love to propose and debate “rules”, “laws”, and “conjectures” in ecology and evolution, although Andrew might have a particular love for this pastime.  Such ideas help us to describe and understand the regularities we observe in the natural world – and the exceptions to them can reveal deeper levels of complexity and open up new avenues for research.

One rule that hasn’t been explored yet in this blog is Baker’s Rule (also called Baker’s Law).  H. G. Baker observed, in 1955, that the flora of remote islands is typically composed of self-compatible species (much more so than continental flora), and explained this as a consequence of a negative interaction between self-incompatibility (SI, hereafter) and the process of colonization.  A self-compatible species can found a new population through the dispersal of a single seed.  However, SI species have a harder time of it for several reasons:
According to Baker’s Rule, then, SI species require the concerted dispersal of multiple seeds to colonize new sites.  This might not be difficult for nearby sites, but for long-distance colonizations it apparently presents a substantial hurdle that leads to the observed under-representation of SI species at sites such as remote islands.  Baker’s Rule has been investigated extensively since it was proposed, and it seems to be broadly true, although there are a number of exceptions to it as well.

Mike Nowak, myself, and Anne Yoder recently had a paper published in JEB about an exception that is of particular interest because it concerns Coffea, the beloved genus that provides us with the coffee bean.  Julia Child once quipped that “it is difficult to imagine a civilization without onions”, but I would submit that it is even more difficult to imagine modern civilization without coffee.  More scientifically, the exception we studied is of particular interest because of the very long distance over which dispersal and colonization was achieved: from Madagascar or even mainland Africa (which one is not known), all the way to the remote Pacific island of Mauritius.  The several Coffea species involved here are apparently self-incompatible, which makes this very long-distance colonization a notable exception to Baker’s Rule.

Let’s review the geography a bit: 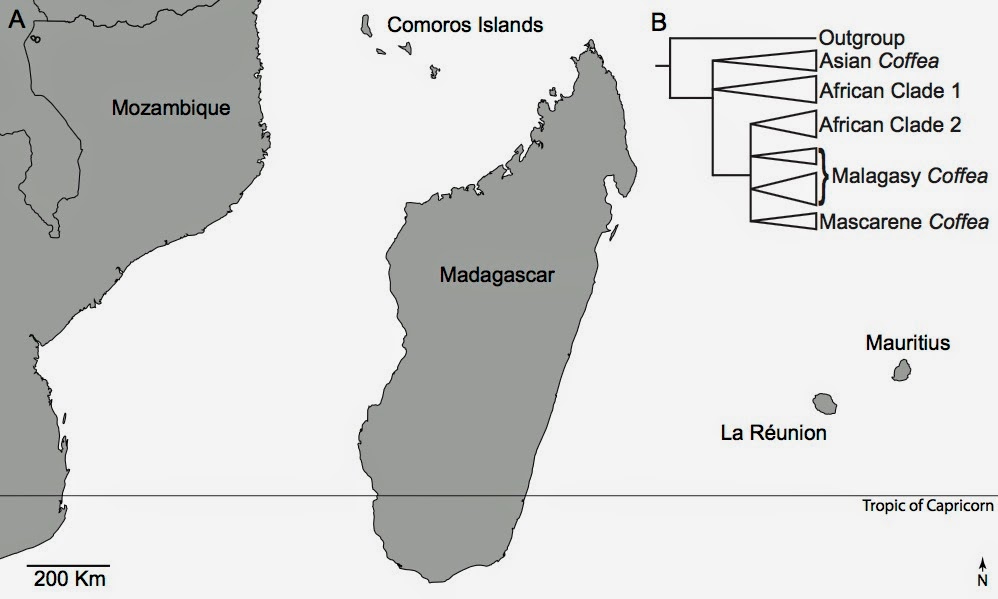 On the left is the southeastern coast of Africa, with Madagascar, the fourth-largest island in the world, to its right.  Over on the right-hand edge is Mauritius, about 2000 km from the African mainland and more than 1000 km from the east coast of Madagascar.  Mauritius is a volcanic island that formed about 8 million years ago, and is best known as the home of the now-extinct dodo (itself an interesting case study in long-distance dispersal and colonization).  Africa, Madagascar, and Mauritius all have their own Coffea species, and the little phylogenetic tree at the upper right shows their relationships, which remain poorly resolved.  (There is also Coffea on La Réunion, the other member of the Mascarene Island group shown here, but that Coffea almost certainly arrived later, from Mauritius, so I won’t discuss it here.)  Mauritius is a very small island, just over 2000 km2 in size, so it presents an inviting but difficult-to-hit target for seeds from Madagascar or the mainland: 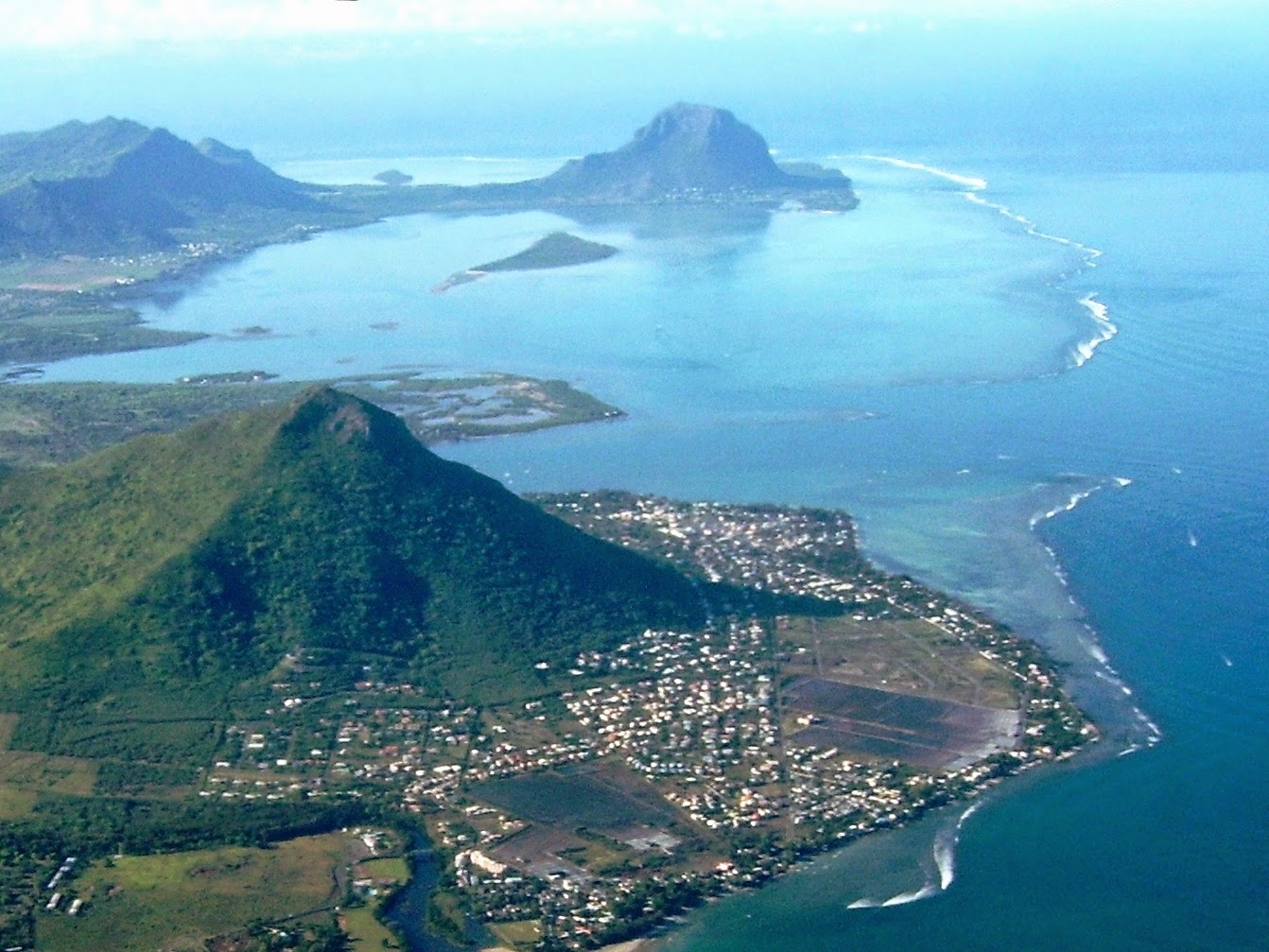 Mike has been doing a lot of hard work in this system for some years now.  Mike provided me with a photo from his time there; let us all take a moment to pity the life of the tropical field biologist. 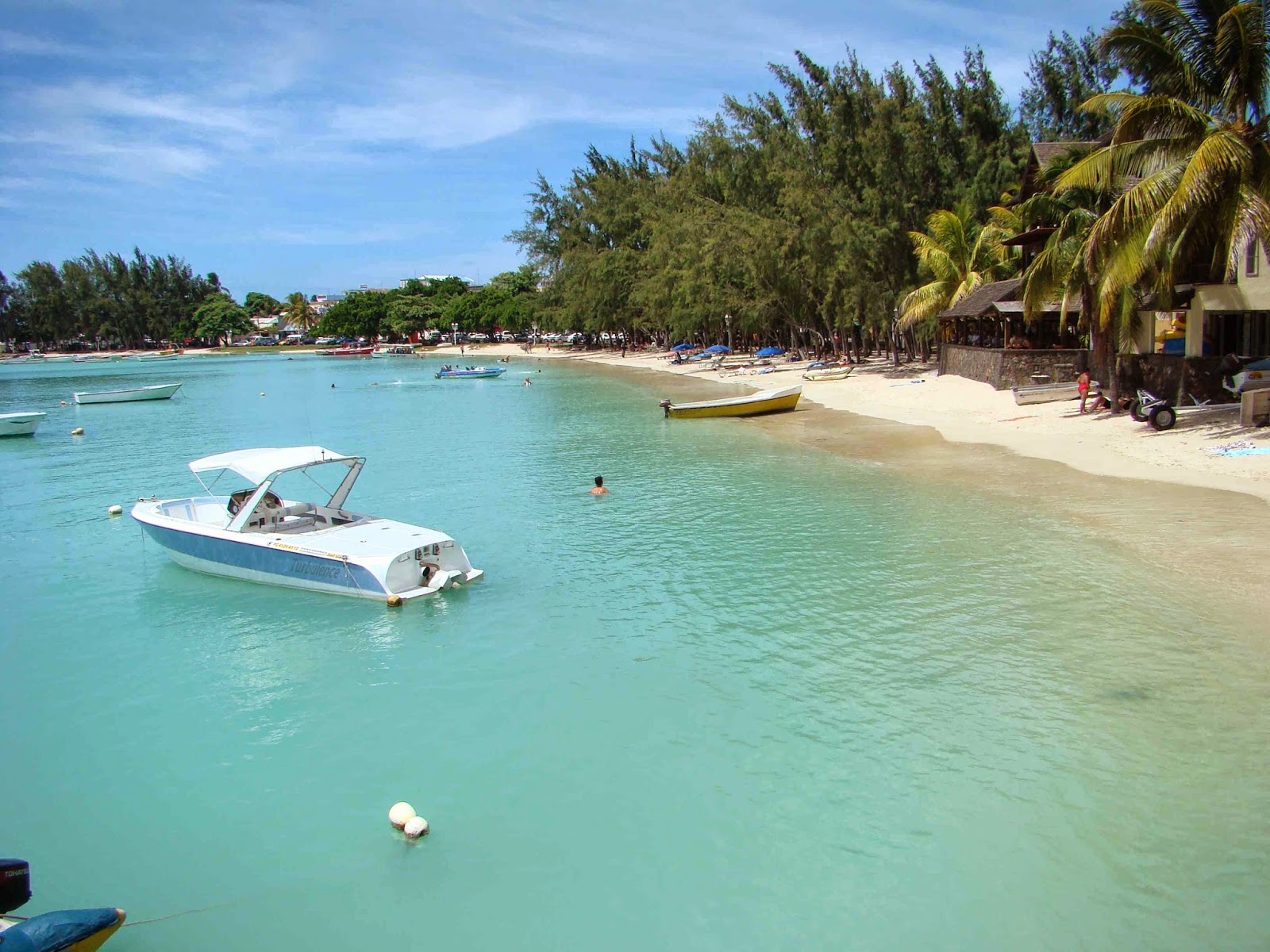 These sorts of pursuits keep Mike very busy (plus, less tongue-in-cheek, he has just started a new job at the University of Oslo; I imagine he’ll be working hard to get funding to go back to Mauritius next winter!), which is why I’m writing up our paper for the blog.  That means I’m going to skim over a good deal of the amazing work that Mike has done in the system:

These results lay the foundation for what I’m going to talk about for the rest of this post: estimating the size of the founding population.  Mike’s results above establish that the colonization of Mauritius occurred too long ago for neutral genetic markers to be useful in estimating the founding population size. However, because these Coffea species are self-incompatible, their SI alleles are subject to negative frequency-dependent selection (NFDS): rare SI alleles are favored because plants possessing them can cross widely, whereas very common SI alleles are disfavored because the crossing of plants possessing them is hindered.  These dynamics mean that SI alleles (like alleles at other loci subject to NFDS, such as MHC alleles) tend to be preserved over very long periods of time – indeed, so long that essentially the same SI alleles are observed in various Coffea species that diverged millions of years ago.  This leads to a pattern called trans-specific polymorphism: polymorphism at a locus that is sustained even across speciation events.  The gene tree Mike obtained, shown above, displays a clear pattern of trans-specific polymorphism: SI alleles drawn from across African, Malagasy, and Mascarene species are often more closely related to each other (because they share the same ancestral allele) than are SI alleles drawn from just one of those groups.  A more visual way of saying this is that the red, blue and green colors (representing alleles from the African, Malagasy, and Mascarene groups) are sprinkled across the gene tree, and often co-occur within a single subclade – very different from the more typical pattern of intraspecific polymorphism that would lead to one cluster of red alleles, one cluster of blue alleles, and one cluster of green alleles in the gene tree.  Once you wrap your brain around this fact, it is very cool, because it means that as far as the SI alleles are concerned, the colonization of Mauritius might as well have happened quite recently; 100 years ago, say.  Apart from the possible early loss of SI alleles due to drift when the founding population was still very small, the SI allelic diversity in Mauritius today is likely the same as it was at the time of colonization.  It can therefore be used to determine the size of the founding population.

How?  Well, suppose you know the number of distinct SI allelic lineages in the source population; a likely estimate for this system is 30 (see the paper for supporting citations).  Now pick a founding population size; 10 seeds, let’s say.  The SI allelic diversity at the moment of founding is easy to calculate, based simply on sampling the source population.  Now you just need to run time forward a bit, with reasonable estimates of the population growth rate and such, to allow drift to cause the loss of some alleles early on.  Once the population reaches a sufficient size (we used N=5000, which is extremely conservative), SI alleles will essentially never be lost due to drift, even over millions of years, because of the NFDS acting on them.  Once your simulation reaches that point, then, you have one estimate of how much SI allelic diversity would be expected today, based on a colonization event millions of years ago involving the parameter values you chose (here, 10 seeds from a source population with 30 distinct SI alleles).  You can run this stochastic simulation many times with the same parameters, to get a full distribution of the expected number of SI alleles – and then you can vary the parameters, to see how that distribution changes.  Inspired by a similar study in Darwin’s finches (Vincek et al. 1997), that’s what I did, in my contribution to the paper:

This is our key result (again, click to see it larger).  Panel A shows the distribution obtained for 30 SI alleles in the source population, given a number of founders (Nf) ranging from 1 to 50.  Now the question becomes very simple: what values of Nf produce a distribution that overlaps well with the observed number of SI alleles in Mauritian Coffea today (seven)?  If you start with three or fewer founders, you never get seven or more SI alleles at the end, because it is mathematically impossible for the founders to carry that many different alleles.  If you start with ten or fewer founders, it is somewhat unlikely that you will end up with as many as seven SI alleles, although it does happen sometimes.  If you start with more than 25 or so founders, on the other hand, it is unlikely that you will end up with as few as seven SI alleles.  There is a “sweet spot” of about 11–24 founders that is most likely to result in the allelic diversity observed today; with 15 founders, seven SI alleles at the end is the median result, and so perhaps it is a “best estimate” of the founding population size.

How much does this conclusion depend upon the allelic diversity of the source population, As?  Not very much, as it turns out.  Panel B shows a summary of the same results for different values of As from 10 to 34 (34 being about the maximum plausible value); now only the mean (not the median) of the distribution is shown, for simplicity.  It can be seen that the results for different values of As are quite similar until the number of founders gets quite large; regardless of As, then, the founding population looks likely to have been roughly 11–24 individuals in size.

Now, this is somewhat of an oversimplification.  Results are somewhat sensitive to the rate of population growth (slower growth leads to more generations in which drift plays a substantial role in the process), and Coffea disperses in fruits that actually contain two seeds (coffee “beans”) which complicates things somewhat, and so forth (see the paper for details).  But the upshot is clear: at least five seeds (and thus three fruits) were likely required for colonization to succeed and produce the present-day population, whereas it is very unlikely that more than 31 seeds were involved.  The fact that a synchronous dispersal of several-to-many seeds apparently managed to arrive at Mauritius over more than 1000 km of open ocean and establish a new population there is quite remarkable, and demonstrates that Baker’s Rule, while a useful rule of thumb, is far from ironclad.  Furthermore, the fact that it took only a few million years from the formation of Mauritius to its colonization by Coffea, despite Baker’s Rule, suggests that such long-distance dispersal events might not be as unlikely as is commonly assumed.