This story is at the confluence of two beginnings. The first beginning was the purchase – in 1975 – by my uncle, Paul Hooker, of the Corral Creek cabins on the Kispiox River north of Hazelton (BC), the most northerly town on highway 16 (the Yellowhead Trail), about 75 km northwest of Smithers. It is a truly picturesque place, with cabins situated on a raised narrow tongue of land that the river flows up to, then around, and the away from. Look west from the cabin window and you can see the river coming directly toward you from the northwest in a long stretch maybe 50 m directly below. Then walk out behind the cabin to the outhouse, just 10 m away, and you can see the long stretch of river flowing away to the southeast. 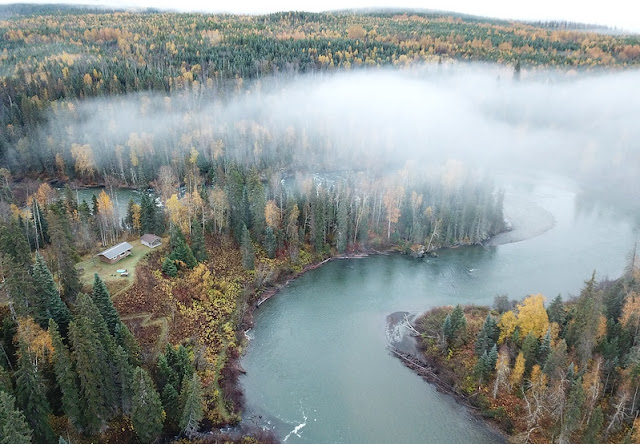 For the subsequent 50 years, we have used the cabin for rest, relaxation, nature watching, adventure, and – above all – for fishing. First we fished for salmon and then (and now) for their close relative the steelhead, of which the Kispiox River is justifiably famous. We come every year – often multiple times – and ownership has transitioned over the years from Paul, to Paul and my father (Andy), and then to their various children – including my brother Mike and I. It was Mike that introduced the use of camera traps.

The idea behind camera traps is that you can observe animals year-round without actually being present to see them “in the flesh.” You simply set up your camera and walk away. The camera is then triggered by infrared light (heat) moving across a sensor array and it turns on to record an image or video. Then, maybe a year later, you can come back, download the camera, and scan the videos and photos on your computer.

The first cameras that Mike deployed did not really impress me. The quality of the images was just so poor that, while I could see a bear was there (or not), I couldn’t really get excited about it from a nature photography perspective. But, as the years passed, Mike got better and better cameras and the potential became more apparent – especially for videos, where low image quality is smoothed over by the excitement of action. So I decided to get into the act, buying a high-quality (for the time) Browning camera that I placed on a salmon spawning stream. Sometimes it worked and sometimes it didn’t but, in the former cases, the videos were sometimes transcendent. I needed to do more with this.

So, with Aspen (then six) and Cedar (then three), we collected stickleback and then – back in Montreal after sabbatical – used my Mom’s microscope to manually measure the traits I knew were important for adaptation to lakes versus streams. Finally, with input from everyone, I wrote up a paper and published it in the journal Evolutionary Ecology Research. Cedar and Aspen were full partners in the work and so were co-authors on the paper. The experience left us hoping for another family research project.

These two beginnings coalesced after I wrote a research grant to obtain high-quality cameras for remote observation in various locations. Most of the cameras were designed to take only images, which is the typical standard for research – yet a subset were designed to also take video. These were destined for deployment at our cabin and formed the basis for our next family research project.*

In recent years, nearly all of our camera traps have been deployed in a remote area near our cabin where animals use a 3.3 km ridge trail to navigate along a ridge. The trail is so defined that it looks like a hiking trail in some (modestly) popular area. Curiously, however, the trail occasionally splits and then comes back together again 10-100 m later. Walking this trail with my wife Heather, my brother Mike, and the kids, I would often speculate as to why these splits occurred. Were they because one type of animal (e.g., bears) preferred one path and another type of animal (e.g., moose) found it easier to navigate another? Or was it because moose with antlers had trouble navigating a route that was easier for moose without antlers? Or perhaps one branch looked easier (or more obvious) when travelling one direction (northwest) but the other branch looked easier when travelling the other direction. Or maybe some individuals were just right handed and others left handed, applying those biases to splits. Musing on these various options, we decided to pace our first set of the new camera traps on those splits. A year later, the entire trail had 10 camera traps deployed, six on various splits and four at various other locations. 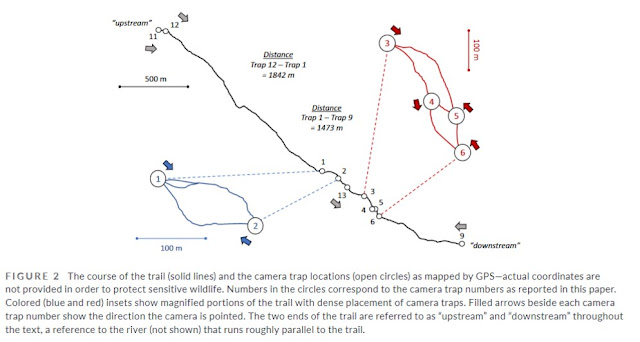 We left the camera traps out all year for three years – downloading data and replacing batteries as needed every year. Then COVID hit and we were spending way more time at home than before – providing an opportunity to finally analyze the data. Weekends – especially in winter - became a ritual. We would sit in front of my computer for a few hours each day, watching each video and recording the species of animal and various other attributes. For the three years of camera trap deployment we ended up with 3770 observations, consisting mostly of moose (2966), wolves (476), and brown bears (224) – with additional observations of at least 12 other mammal species (lumping the various weasels – apart from wolverines – together).

But what should be the focus of our first paper based on these data? Although we might logically have decided to start with the above question about trail splits, something else jumped out right away – injured moose. In a number of the videos, moose could be seen limping through the field of view, with obvious angular displacements of their limbs – that is, a bending outward or inward at the carpus (equivalent to our ankle). These injuries would be so dramatic and obvious that they would seem incompatible with survival. Indeed, one of the images that will be forever burned into my retina is that of a moose trying to run along a gravel bar on three good legs, the other flopping around behind. The injuries on these camera traps, however, seemed to have at least partially healed – presumably because they never got as bad as the “floppy” stage. 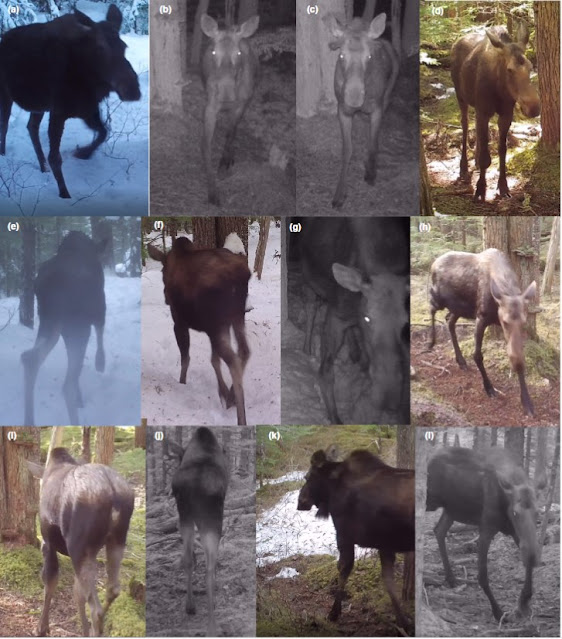 Was it possible that the moose had simply healed enough to “deal” with these injuries – and now were not too severely compromised in their movement? Perhaps we could test that by comparing their movement patterns to those of uninjured moose. Indeed, even before this most recent camera trap deployment, we had seen moose with injuries on the older camera traps – and though perhaps that some of them (one anyway) was the same moose in multiple years. What would these new and better recordings reveal? We had 12 injured moose to work with – although (perhaps) some of those 12 were actually the same moose recorded in different years.

We first set out to ask if injured moose showed gross differences in their time of movement. We had previously noted – based on our older camera traps – that moose seemed to move upstream in the spring and downstream in the late fall and early winter. That pattern was confirmed with the three-year deployment of our new camera traps. The injured moose were no different in this respect. 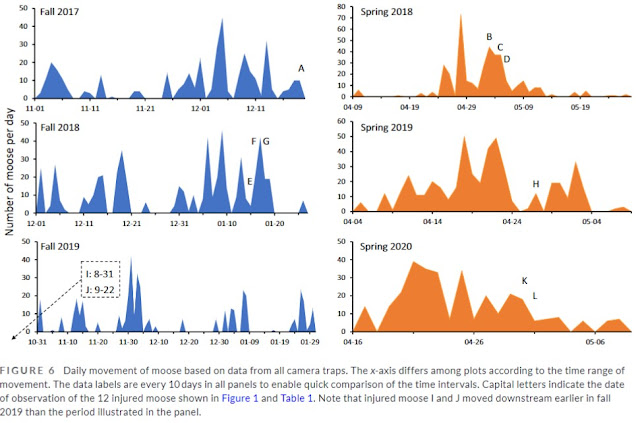 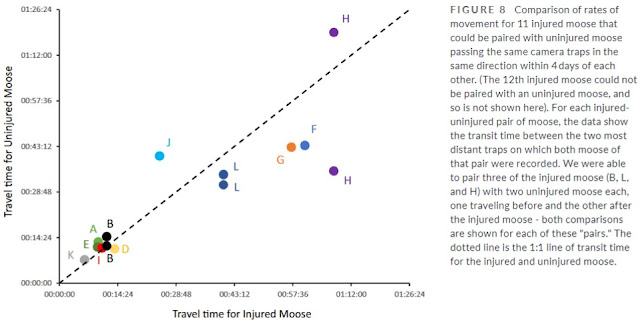 In the rest of the paper, we speculate on the reasons for the apparent non-effect of obvious injuries on movement. In short, the key point is that probably only moose that could still get along well – even with the injury – would live long enough to be recorded on our camera traps. This is kind of like the old observation that bullet marks on war planes returning to base mysteriously seem to be absent from the engines and cockpits. Of course, we also discuss in the paper how these findings have broader implications – especially in relation to how natural selection works on organismal traits.

I am writing this on a rainy day at my cabin while on sabbatical. Tomorrow I will start to go out and pick up the camera traps that have been recording the past year. We will do the rest when the kids arrive in a few weeks. We now have two more years of data – beyond those already published – and we have a lot of observations I haven’t discussed here. What will be the next family paper? Maybe it will be about the splits. Or maybe about how various animals “use” the bear-marking trees. Or maybe the injured wolves, which in inordinately common. Whatever it is, the rewards of family research will continue to accrue.

Or I could just focus on posting TikTok videos on @cameratrapclassics.

* I suppose it is worth noting that – beyond purchase of the cameras – no research funds were used for any travel or remuneration of myself or my family. In short, neither I nor my family have received any monetary benefits from the work – quite the contrary, in fact, as we have invested a lot of our own personal funds in implementation of the project