I have decided to release my online lectures from this fall as a "short" course on youtube HERE. This series of blog posts outlines how the lectures were developed. 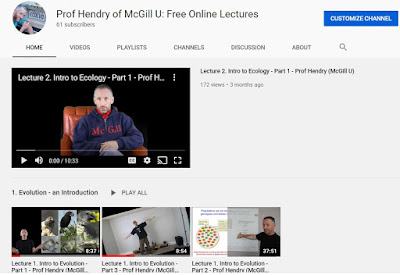 A critical part of my in-person teaching has always been generating a personal connection with the students - no matter how big the classroom. Underpinning those connections is a kind of "show-and-tell" conducted during and  after class. For instance, I always bring in exciting physical items to illustrate concepts discussed in the class. Highlights from my Introductory (Organismal) Biology classes over the year have been a real gorilla skeleton alongside a cast of a human skeleton, a meter tape stretched out across the room to illustrate the size of a whale shark, a (stuffed) platypus, and many more items, but especially my wife's pet ball pythons (see picture below). These physical items coupled with the lectures generated some of the most fun personal interactions with students. 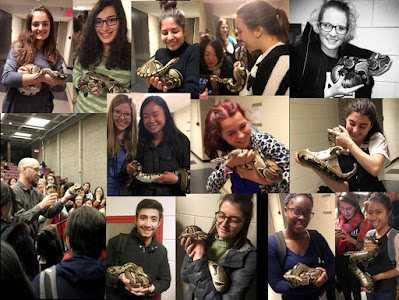 The shift to virtual online teaching was going to throw all of this out the window - the best parts of my lectures - gone. I spent months mulling how best to achieve some of this personal connection in the virtual lectures, and I settled on "place-based teaching." The idea was to pre-record a 10 min video for each lecture that showed me discussing content in a physical location where I was (or had been) present. My hope was that I could "take the students out with me" to particular locations, where I could embed concepts into a real setting with which I was intimately familiar.

I started this effort at my cabin in northern BC over the summer. I simply walked around and recorded myself making a variety of natural history observations in hopes that I would be able to inspire new content for my lectures - or illustrate existing content from past years. I did not have a pre-conceived notion of how these observations were going to fit together - I simply recorded as much as I could in hopes that I could piece together useful narratives.

When I got back to Montreal, I sifted through the various recordings to find useful aggregations - and  the first one to emerge was a group of observations involved organisms consuming other organisms: bears eating salmon, skunk cabbage, and red osier dogwood berries (from camera traps); leaf miners eating aspen popular and willows; bark beetles eating spruce trees; parasitoid wasps ovipositing in bark beetle larvae; mice eating nuts that we put out for them; wolves following moose (again from camera traps); and so on. Thus, my "introduction to ecology" lecture became centered on food webs. Here is the introductory video that I released in advance of the lecture as a way of generating a place-based connection between the students, myself, and the content.

A lot of the footage from my cabin also related to various effects of climate change, and so the next lecture became "Ecology and Evolution Under Global Change." Here is the introductory video for that lecture assembled from recordings at my cabin combined with additional recordings from my home in Montreal.

A third place-based introductory video from my cabin centered on mammal behavior as seen through the lens of camera traps that we have deployed there.

Of course, I couldn't use my cabin for all of the "place-based" introductory videos (e.g., amphibians, reptiles, and primates) - and so I also used footage recorded in previous years from various field sites around the world. I won't show them all here - but below is the one for Galapagos (Evolution!), which was the very first one I recorded and released to the students.

Overall, I think this "place-based teaching" approach was useful for generating a bit of a connection with the students. The next step was combining that approach with a call for "lecture collaborations" with the students. I will detail these collaborations in the next post but - in essence - at the end of each introductory video I asked the students to provide examples or pictures or videos from their local areas - and then I wove those into the remaining segments of the lecture.

Here is the developing series of #TryHard Virtual Teaching