Carnivals #64 and #65, and some musings about continental drift and niches

The Carnival of Evolution had a hiccup that resulting in two monthly Carnivals coming out within a few days of each other, so I decided to wait and lump them into one post.  So now, for your delectation, double the usual number of cool blog posts about evolution!  Also, see below for some random musings about life and evolutionary biology.

Carnival #64 was hosted by Reconciliation Ecology, with a "cabinet of curiosities" theme; I guess sometimes it's pretty hard to find a theme that really unites everybody's posts!  Our contribution to that one was Njal Rollinson's very interesting post on non-adaptive explanations as null hypotheses in evolutionary ecology, which delves into questions regarding parsimony and the role of models.

Carnival #65 was hosted by Pharyngula, where PZ brings his usual flair to a Halloween horror theme.  We had two contributions that edition, due to some mysterious alignment of the stars.  One was Joost Raeymaeker's post Back to the future IV: Michael J. Fox encounters the Red Queen, an entertaining spin on host-parasite interaction evolution.  The other was Kiyoko Gotanda's post on the spatial patterns of directional phenotypic selection, introducing a cool new paper in Ecology Letters that pieces together what we know so far about spatial variation in directional selection, a key driver of adaptive divergence and ecological speciation.


And what else?  I was recently in Iceland, where I stood at a spot where the North American plate is separating from the Eurasian plate. 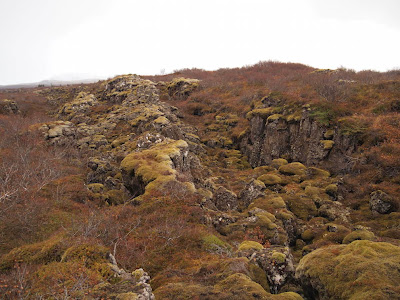 
New land is being created here every day, a reminder of the constant environmental change that underlies everything, opening up new niches even as old niches are destroyed.  This was apropos for me, as my old niche of PhD student at McGill recently disappeared – being successful in that particular niche means, ironically, that the niche evaporates out from under you!  Perhaps I over-exploited that resource; maybe I should have found a way to sustainably harvest PhD funding for a couple more years.  Luckily, a new niche, postdoctoral researcher at CEFE/CNRS in Montpellier, France, opened up just in time for me to colonize it; indeed, I was in Iceland en route to join the lab of Luis-Miguel Chevin, where I am now starting on a project involving adaptation to multi-dimensional niches with mutational heterogeneity and all sorts of fun, complicated stuff.  May you all find a new niche just when you most need one!
By Ben Haller - November 07, 2013