Every year, the Conservation, Ecology, Evolution, and Behaviour group (CEEB) of the Department of Biology at McGill organizes a retreat for faculty and graduate students. When I say retreat I mean a cocktail of science talks, workshops, trivia, lots of wine and even more fun, with a final touch of Kommando Pimperle. As usual, the event was held in the beautiful Maison Gault in Mont Saint-Hilaire. It was the first time that I was able to attend one of these, so I thought I would write a short post about it.

The retreat began with a series of ignite talks, which are basically 5 min presentations where the slides are automatically changed every 30 seconds. This is the first time that this format was used at the retreat, so it was interesting to see how different people dealt with the pressure of time and the unexpected change of slides. Ignite talks definitely have some advantages, particularly because most people are able to keep their ADD on a leash for 5 min. Moreover, you don’t have time to spare on irrelevant stuff; you go straight to the main point. But things can get awfully complicated if you are not prepared, or if your topic is too complicated. Some of the talks were really interesting, but they were so fast that I already forgot the details. However, I do remember that topics ranged from NSERC funding, Fowler’s toads, evolution of cognition, smaller and smaller R2s, ecoevolutionary dynamics, flowering time and climate change, ant evolution, among many others.

Jonathan Davies and Andrew Hendry gave a workshop on how to write research papers, and how to deal with reviewers if your paper is rejected. I really don’t know if the latter was added because it was assumed that if you did as suggested in the first part you were likely to be rejected, but I hope not. Monica Granados and Eric Pedersen gave another workshop, but this one focusing on how to make sexy plots using R and Adobe Illustrator. If you attended this workshop you were also less likely to worry about the reviewers mentioned in the first one. 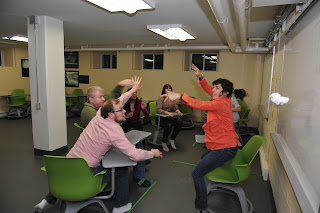 I think this is some sort of water polo on chairs and without the water, bathing suits, and all of that.


After dinner it was time for trivia, but not just any trivia, it was a CEEB trivia. Questions were related to the talks and general knowledge in Biology. I won’t go into detail here because I spent most of the time trying to get the other teams to answer wrong, rather than actually helping my team  –a good reason for which we didn’t win, sorry les tetines. 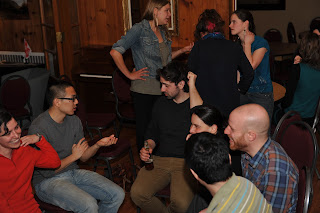 The night ended –very late– with a German game called Kommando Pimperle. I want to be honest here and say that until I started writing this blog I thought the game was Kommando Bimpula, not even google knew what I was talking about. Eventually I found out what the real name of the game was, and it turns out that it is quite popular! It is also very fun to play. Basically, there are several instructions for movements with your hands that are given by the person leading the game, but they can not be performed by the rest unless the word kommando is given before. It gets even trickier! The person leading can also trick you by combining different movements and throw the kommando word wherever s/he likes. And to make it even worse, it is all in German! I was also usually the first person to lose…

This is a video of Kommando Pimperle at a cafeteria in a German university.

All in all, my first CEEB was a great experience! I got to know (in 5 min) what a lot of the people in the department are doing, and got to talk about science in a more informal environment. It is a good way to interact with your peers and establish future collaborations. It could also be the first step to learning German! Kommando Pimperle…